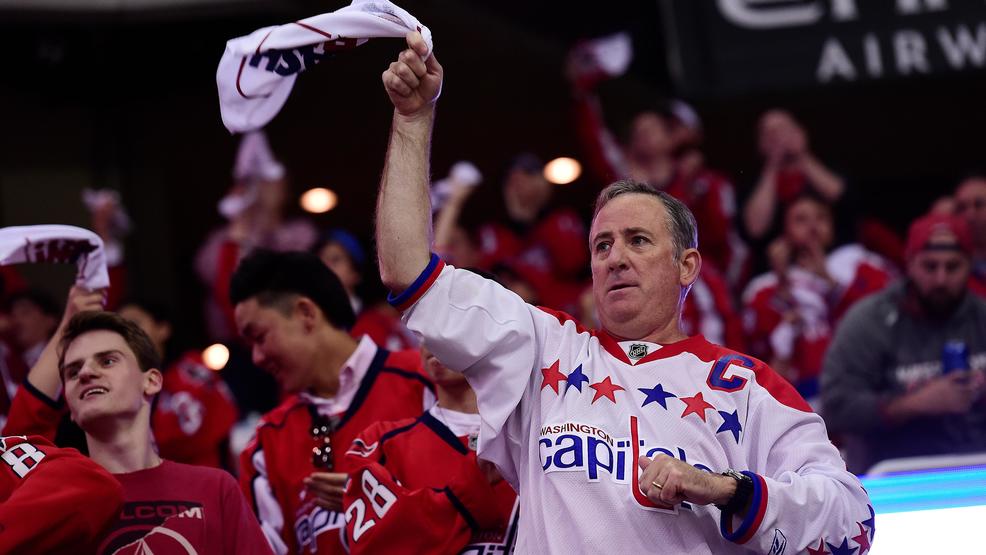 Fans cheer during the first period in game seven of the Eastern Conference Second Round between the Pittsburgh Penguins and Washington Capitals during the 2017 NHL Stanley Cup Playoffs. (Image: Patrick McDermott/NHLI via Getty Images)
SEE MORE

7 ways to celebrate the Caps playoff run this postseason

It has become somewhat of a ritual in D.C. to complain about our chronic losing sports records. A major D.C. sports franchise has not won a championship since 1992, when the Redskins won their third Super Bowl ring. But at least one D.C. team has maintained a consistent postseason run: The Washington Capitals! Of their 42 complete seasons, the Caps have made the Stanley Cup Playoffs 27 times, although they have not yet won the Stanley Cup; they have only not been in the playoffs once in the last 10 years.

As the Caps prepare to enter the 2018 Stanley Cup playoffs, they have announced multiple initiatives and promotions to help fans cheer the Caps on to victory. Here's hoping that this is the year the D.C. curse is broken!

Capitals Uber Trivia Challenge
On Tuesday, April 10, from 11 a.m.-2 p.m., fans can open the Uber app and look for a special message to request a ride from Capitals mascot Slapshot and in-game PA announcer Wes Johnson. Slapshot and Johnson will host a trivia contest during the ride giving the passenger the chance to win two tickets to the first home game of the 2018 Stanley Cup Eastern Conference Quarterfinals at Capital One Arena on Thursday, April 12 at 7:30 p.m.

ALL CAPS Ticket Challenge
Every year the Caps host a playoff ticket giveaway that asks fans to tune in to the official Twitter account @Capitals to learn what the daily challenge will be. In the past it has involved city-wide scavenger hunts that end with tickets to that night's playoff game. Fans are also invited to pick up a "We are ALL CAPS" lawn signs beginning April 9. For details on both parts of this ALL CAPS campaign, check the @Capitals Twitter account regularly.

Caps Viewing Party
Join the Caps in welcoming Yardhouse to the Chinatown neighborhood on Thursday, April 19 at 7 p.m. for a game four viewing party. The event will feature appearances by Capitals personalities including Slapshot and Red Rockers.

Rock the Pink Playoff Rally
On Saturday, April 14 the Caps will host free street hockey clinics (10:45-11:30 a.m. and 2:30-3:30 p.m.) as part of Loudon Inlines family day at Trailside Park Outdoor Rink; participants must be 13 and older. Slapshot and the Red Rockers will be in attendance, hosting raffles, giveaways and more.

Red Deliveries
More than 50 bars in the D.C. area will be handing out Caps swag and decor throughout the playoff run, delivered by Slapshot and the Red Rockers.

Caps Playoff Practices
The Capitals' practices are always open to the public, and the practices this week are no exception. Fans are encouraged to attend the Capitals playoff practices throughout the series, with appearances by the Red Rockers and Slapshot and activities on the mezzanine level of Kettler Capitals Iceplex for the kids.

How will you be #RockingTheRed through the playoffs? Tag us in your pics on social media using the hashtag #DCRRocksTheRed