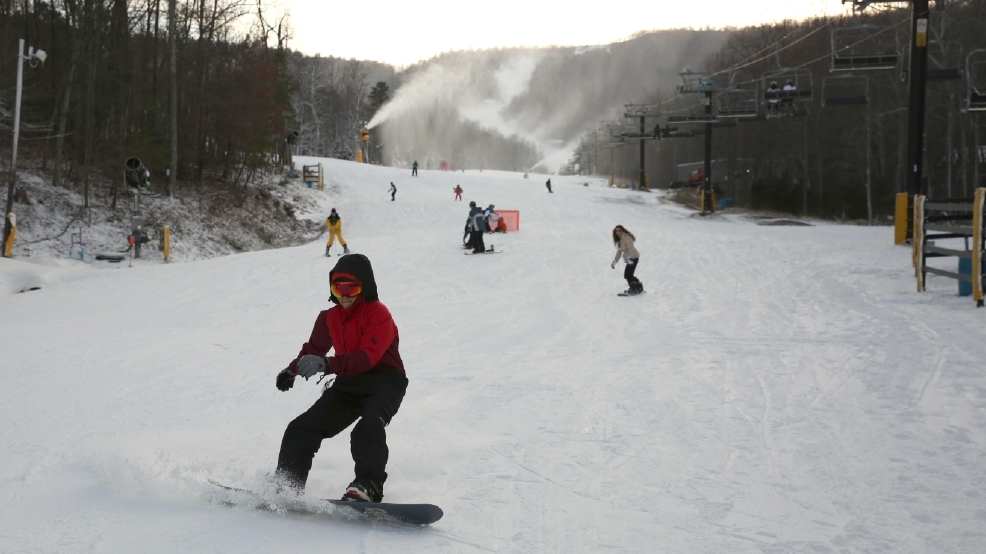 I’m willing to blame my discomfort in the snow on a lifetime in California.

Except for a glorious 5-minute sprinkling of flakes that melted a foot off the ground when I was 8 and attempting to tube down some slush a few years later, I’d managed to avoid snow until last January. It hadn’t even occurred to me that I should try skiing, and as I sweat my way through strapping on some rented boots and trudging into the machine-treated snow I thought it was maybe for the best.

Ahead of my first ski lesson at Massanutten Resort in Virginia, I scoped out my classmates – which included DC Refined’s assistant editor Tina Irrizary. I zeroed in at an almost overwhelmingly adorable 7-year-old clad head-to-toe in pink snow gear, except for her knitted panda hat and oversized goggles.

“This kid is going to be better at skiing than I am.”

I couldn’t bring myself to glower at my pint-sized classmate, but my ego was preemptively bruised as she managed to stand still on the teaching slope. Meanwhile, I was struggling not to slide forward as instructor Brian Fortner talked my fellow students and I about the basics of skiing.

Fortner, who has four seasons of experience teaching and a gentle touch with kids and adults alike, explained that the most important lesson is stopping on skis – which requires turning your feet. Much to my surprise, I didn’t do badly on the turn when I wasn’t tripping over my own skis. I’m proud to say that I even managed to catch myself mid-face plant.

Gliding was another surprise - I’m actually okay at it. Some muscle memory from rollerblading as a kid kicked in and apparently being pigeon-toed helps you maintain the proper v-shaped ski formation. Fortner explained that newbies often make the mistake of trying to muscle their way through every move. “It’s more of a graceful, sliding motion,” he said. I sped down the bunny slopes, narrowly avoiding downed kids on snowboards.

Brian taught us how to make a sharper turn to a stop and evaluated my dozen-or-so classmates on a slightly larger hill, deciding if we could graduate to the intermediate class. I was brimming with optimism as I sped through the drill.

“Eh, I’m not sure you should go on, I’m not confident you could turn well enough for the bigger slope,” Fortner said.

My heart nearly stopped. I may have scraped by with a C minus more often than I want to admit, but I’ve never failed a class in my life. “It’s not pass/fail,” Fortner tried to explain in a conciliatory way. “You just have to practice more.”

Thinking about my competition – you know, the super cute kid – I asked Fortner redraw the course in the snow and did it again. In fact, I was so bent on getting it right, I did it three more times. After I was reassured I could join the intermediate course, Fortner told me he admired my “stick-to-it-ness.” I didn’t want to inform him that I really just didn’t want to be outshone by someone who’s probably shorter than the length of my ski.

The second lesson, which didn’t include any kids, was on Southern Comfort – a beginner level hill. After stumbling on and off of a ski lift, Fortner demonstrated some more advanced maneuvers and pointed out which areas of the slope were flat or fast. Fortner warned that the bottom of the hill was decidedly speedy, but with his instruction I managed not to maim myself or anyone else.

At the end of our second lesson – during which, I only lost one ski briefly – I bee-lined for the lift. I was guarded by my helmet and an overblown sense of bravado when I launched myself down the hill again, stopping just before the fastest portion to plot out my route.

Ever since my Dad taught me what it felt like to go into a car going over 100 miles per hour (sorry Mom), I’ve craved the sensation of moving faster than my heart can pound. Even if it’s just racing down a bunny slope with the risk of crashing into tourists, skiing scratches the itch for adrenaline. I was determined to zip down the hill with panache and slide to a smooth stop like an Alpine princess.

I like to think that I crashed to spare the lives of countless children.