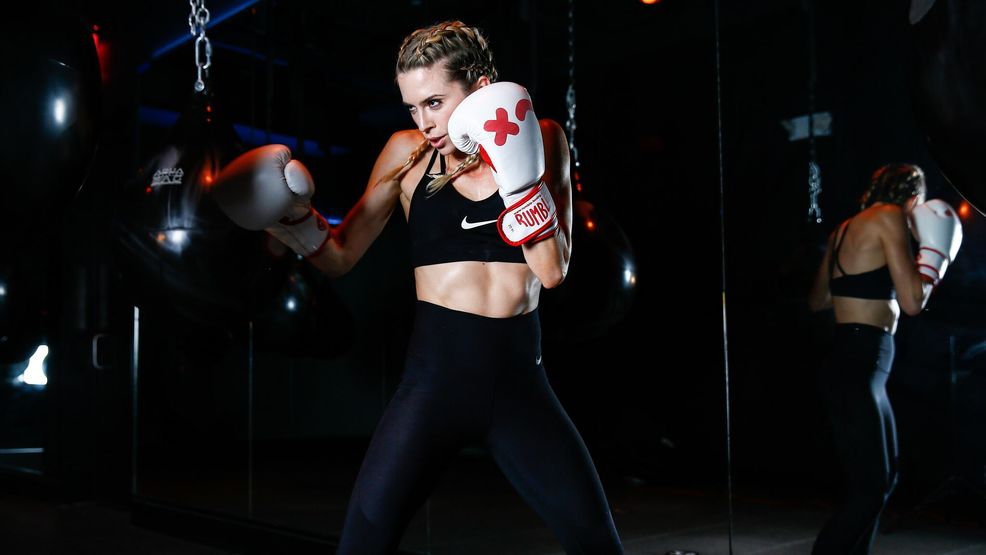 Let's get ready to Rumble at the new D.C. boxing studio

It's Friday evening after a particularly long week, I'm bouncing on the balls of my feet in a dark room with my fists in front of my face, and I can't wait to start punching things. Don't worry, I haven't joined an illicit fight club and I'm not participating in anything seedy. I'm simply at Rumble, getting ready to take my first boxing class.

Rumble, which first opened in NYC in 2016, is a 45-minute, 10-round HIIT class combining boxing and strength training that opened its first D.C. studio on April 12. I described it to a friend as Orange Theory for boxing, but I like it SO much more than Orange Theory. Class is divided into two sections: the bags and the floor. You'll complete five rounds on the bags and five rounds on the floor, with each round lasting for three minutes; after three rounds in your starting position (either floor or bag), you'll switch to the opposite side of the room and complete three rounds in the opposite section, followed by two rounds in your starting position and two rounds in your finale position. You stay active the entire time as you will do boxing sit-ups while on the bag side of the room, and bounce in place while you wait to begin the floor sessions.

When you are on the bags, you're executing boxing punches such as a jab, cross, hook and uppercut; you'll learn to think of each punch on a scale from 1-6, as your instructor calls out combos such as 1-1-2 or 1-3-5. When you are in the "floor" section, you'll complete strength training moves such as bicep curls, bench presses, bicycles, burpees, Russian twists and mountain climbers; you'll target arms, abs and glutes during the strength training sessions. On both sides of class, a large digital marquee reminds you what move/how many reps you are doing, and the basics of how to do it.

Though you will absolutely be drenched in sweat and the end of class, and may even find your hands a bit shaky like mine were, the fact that you are changing it up every three minutes not only helps the workout fly by, but it keeps it fresh and challenging. And hey, you can do anything for three minutes!

I am not afraid to admit that I was quite nervous before my first class, and felt the butterflies in my stomach as the jams ramped up. I have no experience with boxing save for a few kickboxing classes here and there. But my instructor, Julia Stern, spent a solid five minutes explaining each punch we'd execute in class and demonstrating proper form to avoid injuries. As a beginner, I very much appreciated the attention to detail and the emphasis on actually teaching form, as the lack of such instruction is my biggest complaint with most boutique fitness studios. And if you find yourself worried about your classmates judging your skill level, let me remind you that the room is pretty dark with only flashes of red and blue light, so no one can even really see you. After class ended (and I took the requisite boxing boomerang) I promptly booked my next class and convinced friends to sign up with me! Trust me, it's that good.

The best part of Rumble, besides what a fantastic full-body workout it is, is that they customize each studio to the location, and the D.C. studio not only has an epic Abe Lincoln in boxing gloves statue, but it also has a Notorious RBG mural. That's right -- Supreme Court Justice Ruth Bader Ginsburg assumes the boxer's stance with a crown, heels and boxing gloves alongside iconic rapper Biggie Smalls! That sight alone is worth a visit to the studio.

Rumble is backed by splashy investors such as Equinox, Justin Bieber and Sylvester Stallone and is trendy among celebs like Hailey Baldwin, Kendall Jenner, David Beckham, Kevin Hart, Jason Derulo and Selena Gomez. Rumble plans to add treadmill classes to its lineup later this year, so stay tuned. Individual classes start at $34, and packages start at $165. You'll also purchase wraps ($8) and rent gloves ($3).