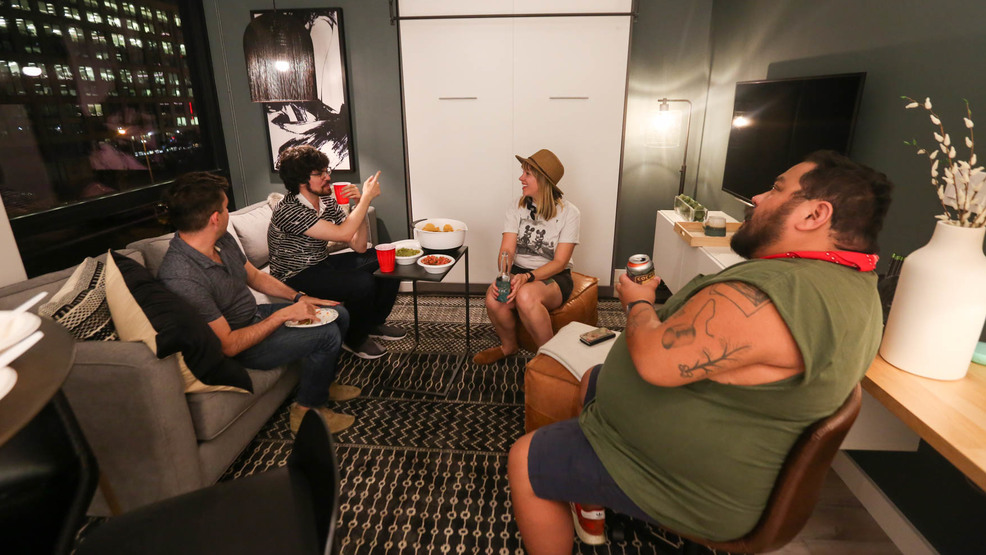 Four out of five party guests in the micro-unit apartment at The Belgard. (Amanda Andrade-Rhoades/DC Refined)
SEE MORE

Living large in a tiny space: What you need to know about thriving in a micro-unit

D.C.'s population is quickly growing and all of those newcomers need someplace to go. Enter the micro-unit, a tiny apartment designed to maximize your living space in as little square footage as possible. Apartment buildings are flaunting their tiniest living quarters as a new way to thrive in the city, but it's hard to imagine entertaining in a space that's well under 450 square feet. The Belgard in NoMa invited me to throw a dinner party in their 386 square foot apartment and here's what I learned about making the micro-unit a functional living space.

1. It's all about using your space and tools efficiently

Of course you lose some things when you decide to live in a micro-unit, but the limited space forces you to consider what you can live without.

I decided to feed my five guests tacos, plus chips and salsa, and make a batch of margaritas. Although I opted to use paper plates and bowls for the sake of an easy clean up, I had to raid my own kitchen for cooking supplies and I realized I could dramatically parse down what I needed to make a meal. I opted to bring a large skillet, a chef's knife, a drink dispenser, a bowl for chips, a large bowl for food preparation and storage, a cutting board, tongs for my fried tortillas and a spatula. With just those tools, I was able to make everything I needed to feed my guests and then some. Although I had to clean my knife, skillet and cutting board in between prepping each item, the meal preparation was surprisingly efficient.

The Belgard intentionally opted to make all of their appliances full sized, except for the dishwasher. Although the dishwasher would've undoubtedly been full after my dinner party had I used real dishes, if you're living alone you it's unlikely you'd have to run the dishwasher every day.

The Belgard's apartment was already furnished when we got there, but it was clear that no space was being wasted, even in the model unit. Every piece of furniture was movable or served several purposes - the desk also served as a shelf and the ottomans at the end of the bed doubled as seats. The kitchen table was tall and sits 4 people, but I found it easy to move around the apartment, which was crucial when I started cooking and realized my behind kept knocking over chairs in the tight space.

The Belgard's micro-unit had a Murphy bed, which you can lift and tuck against a wall vertically when guests come over. It was immediately obvious that having furniture that can be moved to give you more floor space is crucial if you're trying to make a micro-unit a functional living space where you can entertain, but my guests were so curious about the Murphy bed that they brought it back down onto the floor so they could test it out and eat tacos in comfort.

3. It really forces you to keep clean

I'm the type of person that can't focus in disorganized spaces, but living in a micro-unit forced me to really keep an eye on my clutter. One or two things out of place in a micro-unit can make the entire space feel claustrophobic, but it briefly snapped me out of the habit of throwing my backpack and shoes on the ground without thinking about it.

4. Yes, you can entertain

I invited my three current roommates plus two friends to join me for dinner at the micro-unit and the six of us had no problem settling in for dinner. It wasn't the most conventional seating arrangement - some people posted up on the couch and others sought out the floor until someone asked to try out the bed. The party felt intimate and surprisingly uncramped, even as several people loitered by the kitchen counter for margaritas and beer.

5. Communal spaces are critical - and kind of awesome

It's not uncommon for luxury apartment buildings to have ritzy communal areas, but they're frequently empty. However, the quality of communal space offerings becomes a lot more important when you're living in a micro-unit and want to escape your space for a while. The Belgard's communal bar area may not come with booze, but it looks and feels like a speakeasy. The real selling point though was their game room, which featured retro arcade games and shuffleboard, both of which were a hit long after the margaritas were done.