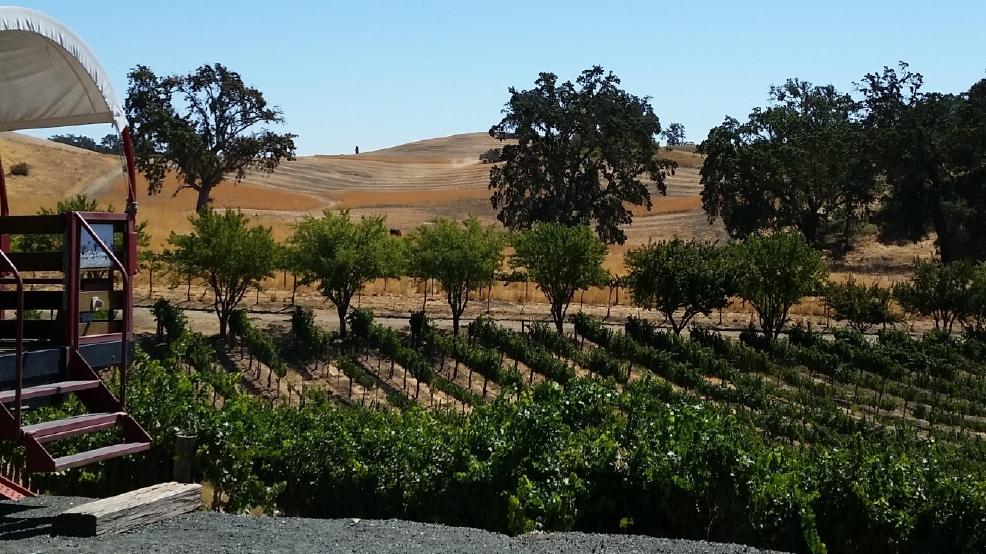 Paso Robles is a different kind of wine region -- the winemakers are collaborative and convivial, not competitive. Two-thirds of producers make five thousand or fewer cases per year, which means if you want to taste many of these wines, you need to get out there. We've got the scoop on the wineries you don't want to miss. (Image: Kelly Magyarics)
SEE MORE

4 wineries to visit on your next trip to Paso Robles

Planning a trip to California wine country? No, we don’t mean Napa or Sonoma. About equidistant from both San Francisco and Los Angeles, Paso Robles is a different kind of wine region (and the locals pronounce it “ROW-bulls,” by the way). The winemakers are collaborative and convivial, not competitive. The diurnal temperature swings (which can fluctuate as much as fifty degrees in a 24-hour period), calcareous soils and cooling Pacific winds that usher in through the mountains by way of the Templeton Gap all result in wines with intense, pure flavor and racy acidity. And Rhône varietals like syrah, grenache, marsanne and mourvèdre rule. Two-thirds of producers make five thousand or fewer cases per year, which means if you want to taste many of these wines, you need to get out there. Here are four wineries you won’t want to miss:

Paso Robles friendly, encouraging philosophy among winemakers was apparent the morning I visited this winery, as general manager John Teeling and winemaker Jason Joyce brought in their neighbors from Minassian-Young Vineyards and Law Estate Wines so we could taste their releases too. Located in the western hills of Paso Robles in the Peachy Canyon Zone, Calcareous wines “express this little spot perfectly,”Teeling told us. Cold mornings plus the namesake calcareous soil (made up of crushed shells from marine life back from when the area was covered by a sea) translates to long hang time on the vines, resulting in fresh wines with big acidity, fruit and tannins. Wines here are fermented in the trendy concrete tanks increasingly used by producers--sometimes shaped like an egg, an orb or a cube; in Paso’s climate, with its high diurnal temperature swings, they keep the wines thermally stable. We did a flight of expressions from all three wineries, pairing with cheeses from nearby Fromagerie Sophie in San Luis Obispo. The 2012 Calcareous Vineyard Signature D Cabernet Sauvignon--the first vintage of this wine--showed enticing notes of cassis, herbs, dark fruit and bitter chocolate on the nose; the 2014 Minassian Old Oak Zinfandel mixes in a little alicanté bouché, and it was a classic Paso Robles zin--jammy, fruity and a little viscous; and the 2013 Law Estate Intrepid is made from 100% syrah (Paso’s second largest planted varietal, with grenache nabbing the first spot); it had a savory, funky nose, and was bright on the front palate, followed by cedar and white pepper.

Like a little livestock alongside the vines? General manager and winemaker Jeff Freeland welcomed us to this family farm and winery (the name means “free bear” in Spanish) with glasses of 2012 Oso Libre Nativo Primitivo, a light red-hued wine aged twenty months in Hungarian oak with hints of strawberry and spice. The winery is located in the acclaimed Adelaida AVA, ten miles from the coast at an elevation of 1200 feet--perfect to maintain that fresh acidity in the grapes. And sustainability here is key. After harvest, the sheep eat the rest of the fruit and the leaves, and pack down the soil; a reclamation tank under the building holds rainwater, which is dispensed to the vines via slow drip irrigation; and houses on the property gives owls a home (and makes sure they eat the gophers and ground squirrels, so they don’t eat the grapes.) Cattle is raised organically, without hormones, and finished on beer mash and molasses for fat and flavor. We sat down to lunch on estate-grown mushroom cheeseburgers and a glass of the 2011 Oso Libre Quixotic Cabernet Sauvignon. Aged at least two to three years in French oak procured from a small family-owned cooperage, it showed aromas of cherries and vanilla, soft tannins and hints of licorice on the finish. And the 2012 Oso Libre Carnal GSPS--made with grenache, syrah and petit sirah, gets the best of each grape, with baking spices, red cherries, black pepper and grippy tannins.

Located in the Willow Creek District, this small winery converted three years ago to completely biodynamic production--and it’s been kind of like “walking naked into a party,” jokes winemaker David Galzignato. He uses a calendar for everything from planting to pruning to harvesting, and employs a variety of teas, tinctures and other preparations in place of traditional chemicals. Galzignato also views vines as holistic--not unlike people. And in 2011, the winery started picking grapes at night to preserve acidity, employing gentle gravity pressing to retain fruit flavors and minimize oxidation. I was incredibly impressed with the purity of all of Jada’s wines. The 2015 Jada Vineyard 1149 Rosé, made with 100% mourvèdre in concrete tanks, was juicy and mouthwatering on the palate, with oodles of strawberry, watermelon and bubblegum. The 2014 Jade Vineyard Malstria blends syrah, merlot and cabernet sauvignon, aged 30% in new oak, leading to aromas of coke and baking spices, and a grippy, zesty palate. (Rhône varietals like syrah and grenache really take to biodynamic farming, Galzignato told us, and respond best in the first year, with a purity of fruit and refinement of tannins.)

Grape-based spirits are the latest trend in Paso Robles but Steve and Lola Glossner started out crafting still and fortified wines under their PasoPort label. (Yes, Port is technically only made in Portugal’s Douro Valley, but let’s not split hairs), and bottles are adorned with pinup inspired artwork from the 1940s and 1950s. The 2013 PasoPort Touriga Nacional is made with the grape that’s the basis for Ports and many Portuguese table wines; dryish on the palate, it has an interesting character of Kool Aid powder (but not in a bad way) and an earthiness. The 2009 PasoPort Violeta is their flagship Port, a sweet and spicy bottling with a finish of dark chocolate. Paso Port Angelica is a white Port that’s made with muscat, verdelho and chinon blanc; pretty and feminine, it boasts honeysuckle, white peach and tangerine and a hazelnut finish. On the spirited side, Pendray’s Brandy is made with viognier and aged in barrels that used to hold Angelica Port, while the grappa starts with a zinfandel base and is matured in Zinfandel Port barrels. Finally, the liqueurs--plum, orange and walnut--are fun sipped by themselves or mixed into cocktails with citrus juice and chilled sparkling wine (or sparkling water.) And those aforementioned calcareous soils so prevalent in the region? Look no further than the winery’s fossil shell-filled parking lot, which is filled with them.