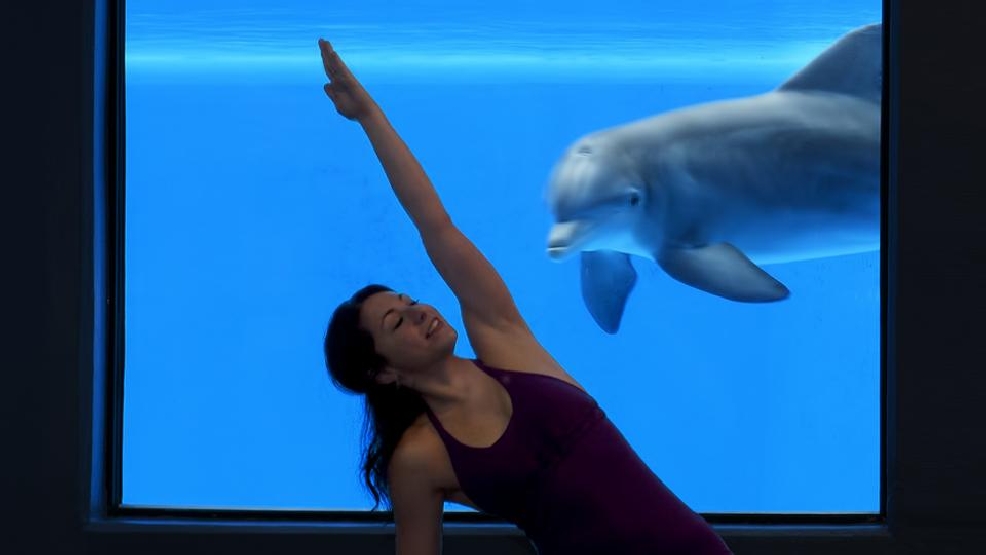 A special yoga class is held in the underwater dolphin viewing area at The Mirage in Las Vegas. (Photo courtesy of MGM Resorts International)
SEE MORE

It was only 8 a.m. on a Saturday morning and the slot machines at Las Vegas's Aria Resort & Casino were already buzzing with gamblers seeking their fortune. I was surprised by the large number of people, but they were probably even more surprised to see me doing a set of squats. When a former Golden Glove boxer tells you to squat, you squat - even if it is the middle of a casino.

I had traveled to Vegas to prove that you can have a healthy weekend; a seemingly impossible task for a city that perfected the all-you-can-eat buffet. But, as we all know, when Vegas does something, it does it big. And that includes helping travelers stay healthy.

My visit to Vegas had started about 12 hours earlier when I checked into my Stay Well room at MGM Grand Resort & Casino. First unveiled in 2012, these unique rooms are designed with 17 "evidence-based" health and wellness amenities ranging from shower water infused with Vitamin C to promote healthy hair and skin to advanced air-filters that reduce allergens, toxins, and pathogens.

The rooms have proven so popular that, in 2013, the MGM Grand expanded the number of Stay Well rooms from 42 to 171. They now encompass the entire 14th floor of the hotel's main tower.

My squats among the slots were part of Aria's "Indoor Hike," a 50 minute workout offered by the hotel's spa and fitness center. It consists of a personal trainer guiding you on a vigorous walk around the hotel and some of the connected buildings. There are lots of stairs climbed and stops along the way to do sets of squats, lunges, and sit-ups.

My guide was Steve "Rocket" Rosen, one of Aria's lead fitness instructors and the former Golden Glove boxer. He kicked my butt.

My mission continued at The Mirage Resort & Casino where I took a yoga class with dolphins. It was me and a small group of people in an underwater dolphin viewing area that is part of the resort's Siegfried & Roy's Secret Garden and Dolphin Habitat. As the instructor led us through a one hour class, dolphins swam by large observation windows that surround the room. Although I had originally envisioned myself doing downward dog poses with Flipper in the pool, it was still a cool experience and very zen worthy.

On the culinary front, I had no problem finding healthy options. I hit a few juice bars, which are now practically standard at every resort on the Strip, and used the Stay Well room service menu a few times.

I also had a wonderful dinner at Mizumi at Wynn Resort & Casino. All of the restaurants at Wynn have vegan and vegetarian menus, and I can tell you that Mizumi's chef Devin Hashimoto certainly knows how to make the most of veggies and tofu.

At the end of my weekend, I returned home feeling more relaxed and energized than I had in a long time. I had a new perspective on Vegas but must admit that the "less than healthy side" of Sin City still has appeal. But as they say, it's all about moderation.