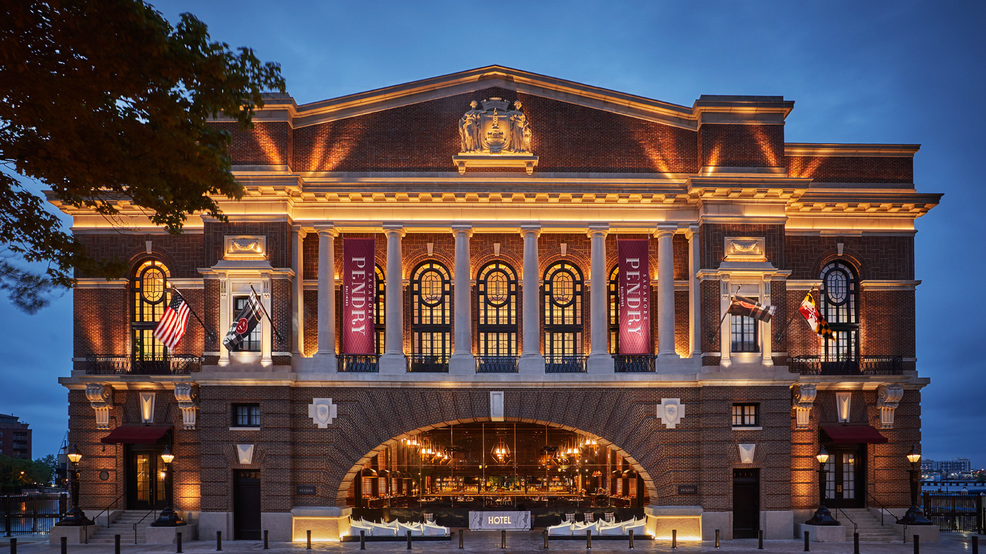 If you’re in the mood for the complete Sagamore experience, consider booking an overnight at the chic Sagamore Pendry Baltimore hotel, about 20 minutes away in nearby Fells Point. (Image: Courtesy The Pendry)<p></p>
SEE MORE

Getting into the Sagamore spirit in Baltimore

Most trips to Baltimore involve meandering around the city’s waterfront, taking in sights from the touristy Inner Harbor to historic Fells Point. Or maybe hitting up an Orioles game if the season is right. But if you’re looking for something a little different on your next trip up to Charm City, make a stop at the Sagamore Spirit Distillery and accompanying Rye Street Tavern.

Co-founded in 2012 by Under Armour CEO Kevin Plank (also a Baltimore-based company), Sagamore Spirit deals in rye whiskey, which has a long history in Maryland. Sagamore Spirit is named after Plank’s thoroughbred horse farm, located about a half-hour away in Reisterstown, Maryland. Along with providing inspiration for the name, Sagamore Farm is also where you’ll find the spring water used in blending the whiskey, making for a truly Baltimore spirit. The whiskey might be fairly new, but that springhouse was built back in 1909—a date you’ll see printed across the whiskey bottles and around the distillery.

Sagamore Spirit is not the only whiskey producer in Baltimore, but its five-acre Port Covington headquarters certainly makes it one of the most eye-catching. Its water tower and glass-paneled distillery can be easily spotted on approach from I-95. That proximity to the highway makes it a easy to find and access.

The first thing you’ll probably want to do when you arrive is take a tour of the facility. Tours are $15 ($8 for ages 10 to 20, free under 10) and include a tasting of whiskey(for those of age) at the end. Hours are Sundays through Tuesdays from 11 a.m. to 5 p.m. and Wednesdays through Saturdays from 11 a.m. to 6 p.m. They can also be booked online.

In terms of the whiskey itself, Sagamore Spirit’s standard rye is nothing that’ll overpower you. It has a soft taste and $40 price point that make it well suited for mixing in cocktails and for drinkers who like a sweeter, less intense brown liquor. When it comes to sipping it solo, seasoned whiskey drinkers might expect something with more nose, spice, and overall punch. For that, there’s the cask strength release, which is both higher proof and higher priced (about $70).

Make sure you’re hungry when you visit Sagamore, too, because you don’t need to be a whiskey drinker to appreciate the newly-opened restaurant, Rye Street Tavern. It features road trip-worthy modern American food from James Beard-winning chef Andrew Carmellini, who is known for his many New York City spots. Come in before or after a distillery tour for a brunch, lunch or dinner that will hits notes of Baltimore and mid-Atlantic cuisine. Can’t miss dishes include the Bloody Mary blue crab salad, fried chicken (in classic and spicy jerked styles) with biscuits or rolls, and several variations of the classic East Coast seafood bake.

Rye Street Tavern also has some fun rustic touches like a bison head watching over the copper-adorned back bar and a sprawling lawn with chairs and tables for an afternoon or evening lingering over whiskey. There’s also lots of options for private dining and event space, if you’re looking to host a party or group experience.

If you’re in the mood for the complete Sagamore experience, consider booking an overnight at the chic Sagamore Pendry Baltimore hotel, about 20 minutes away in nearby Fells Point. The boutique hotel has just 128 rooms and sits on top of a renovated pier. Room views range from the elegant courtyard to the surrounding shops and cobblestone streets and the bustling water, full of boats of all sizes. Decor at the Pendry is warm and modern, with accents of copper and dark wood throughout the lobby, restaurant and rooms.

The hotel’s Rec Pier Chop House restaurant is another showcase for chef Carmellini’s cooking, this time with an Italian twist. Bottles of Sagamore rye adorn the sleek bar. In warmer months, you can lounge at the Pendry’s waterside pool and bar and gaze at the passing ships. Rooms start around $300 and go up from there depending on location and size. Hop a water taxi just down the block, or set out around the city or set out on foot to explore.