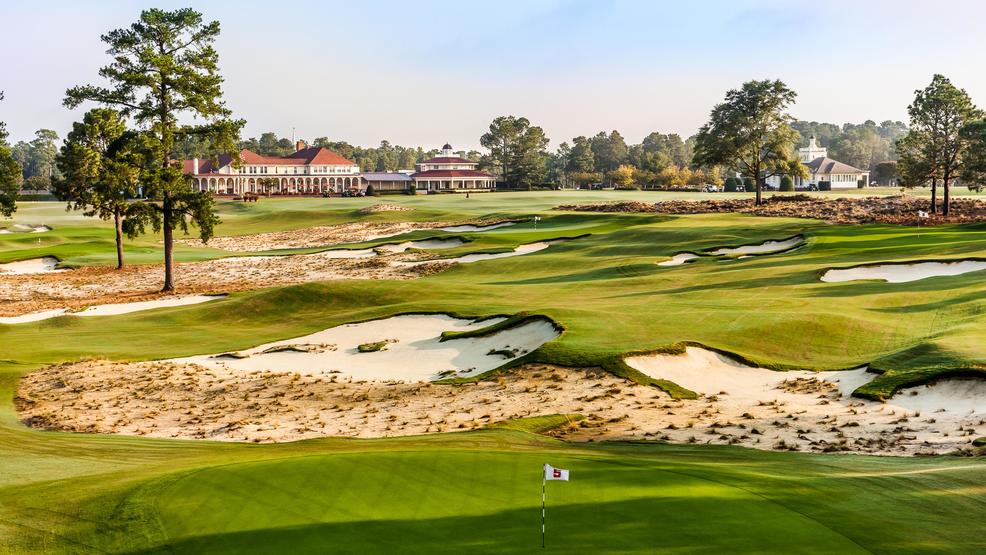 Direct flights make getting your golf on at Pinehurst easy

Few genuine bucket-list golf trips are as accessible as what golfers find at Pinehurst Resort in the fabled North Carolina Sandhills. Here, scratch players and high-handicappers alike walk not only in the footsteps of the game’s greats like Hogan, Snead, Nicklaus, Palmer and Woods, but also alongside historical figures like Annie Oakley, Harry Truman, Billy Graham, and Yogi Berra. Just a five-hour drive from the District, pin-seekers can also hop direct flights to Raleigh or Greensboro - each about a one-hour drive to the Village of Pinehurst.

The Village of Pinehurst was established in 1895 by Boston philanthropist James Walker Tufts who acquired nearly 6,000 acres of scrubby, cleared timberland in the central North Carolina’s Sandhills. Tufts looked to create a health retreat and built 20 cottages and the Holly Inn, which still stands today. It wasn’t long before locals reported dairy cows being “disturbed” by the guests who were playing golf among the bovines as they grazed. A light-bulb went off for Tufts and he recruited an emerging golf-course designer from Scotland named Donald Ross to construct what has become some of the most renown golf courses anywhere on the planet, including his masterpiece, Pinehurst No.2. Tufts engaged legendary landscape architect Frederick Law Olmstead (designer of New York City’s Central Park) to design the grounds surrounding the resort, and the New England-style village literally blossomed over time. Today, much of Pinehurst’s central village carries a National Historic Landmark designation.

Pinehurst Resort’s signature property is the Carolina Hotel and there is no finer way to experience the grace and hospitality than to make this Grand Dame headquarters for your stay.

A driver and a wedge-distance from the main clubhouse for the resort’s nine golf courses, this stately southern belle has sweeping public spaces filled with more than a century of golf memorabilia, photos, period posters and remembrances from days gone by.

Sip an icy cooler on the back porch in one of the lazy whitewashed rocking chairs or try your hand at the 1000-piece jigsaw puzzle in the lobby, the pace slows here for all who enter. Folks know they’re in golf-nirvana upon check-in as the clocks behind registration reflect the hour at both Pinehurst and St. Andrews – the other home of golf.

Golfer’s are a hungry bunch and fueling-up at the Herculean morning breakfast buffet in the Carolina Dining Room is a special treat with the fluffiest southern biscuits, grits, waffles, house-made pastries, eggs, and omelets to order and daily treats to tempt everyone in the foursome.

Upon hitting the links here, many golfers are most surprised to find the legendary layouts are not the brutish-extra-long and tricked-out beasts often found at other golf meccas, but rather tracks that are straight-forward, honest – albeit difficult – and true tests that challenge every aspect of one’s game. Each of the nine courses at Pinehurst Resort stands out – but No. 2 and No. 4 are truly extraordinary.

The Donald Ross masterwork, Pinehurst No. 2 is consistently rated in the top-ten public courses in the world and is the course to play while at the resort. Home to three past U.S. Open Championships (a fourth is coming in 2024), every major USGA amateur championship, the PGA Championship and the Ryder Cup, No. 2 is cemented in the pantheon of the sport’s greatest venues.

Don’t let the generous fairways fool you, this course is all about the approach shot – stay below the hole – and the putting surface. The notorious Ross “turtle back” greens have false fronts, plenty of twists and turns, and have made many a golfer ponder whether washing their car might be time better spent.

Be sure to take a caddy and walk this course if you can, it’s truly a special experience of a lifetime. These guys know their stuff and will add another dimension to your game with their insight and course knowledge, making your four hours on the course a pleasure.

Renowned course architect Gil Hanse’s redux at Pinehurst No. 4 has the golf-world a buzz as the restoration has brought back the natural waste areas, native sand-scapes, dramatic elevation changes and old-time feel to the way the course played under the original Ross design. The redone classic is set to host the 2019 U.S. Amateur later this year.

Even novice and non-golfers can get into the fun at Pinehurst resort.

“Regardless of skill level,” says media relations manager, Alex Podlogar, “We want everyone who visits to have a club in their hand at some point during their stay.”

To that end, Pinehurst resort had all forms of golf enthusiast in mind when constructing the freshly added nine-hole, par 3 course – The Cradle , and an 18-hole putting course, Thistle Dhu. The resort provides clubs and putters and a casual feel on these friendly tracks – even some rock and roll piped in to provide a soundtrack for the mini-rounds.

New kid on the block, Pinehurst Brewing Co. has folks queuing up for ‘Cue as the smokers go all-day long turning out tender brisket, chicken, ribs, and pork shoulder alongside some smokin’ sides. Head brew master, Eric Mitchell puts out lovingly crafted micro-batch lagers, stouts and ales like Belgian Pale Ale, “Pale is the New Zonde,” and “The Turn,” a crisp lager. “We’re letting the guest determine what should be in our taps,” says Mitchell, eschewing the notion of a flagship beer in favor of crowd-sourced voting with their glasses.

Ashtens in nearby Southern Pines is all about local proteins, dairy and produce creating the freshest and tastiest menu in the Sandhills. Favorites include NC Mountain Trout, Tempura Fried SC Shrimp and Southern Bimbop with local Hilltop Angus Beef.