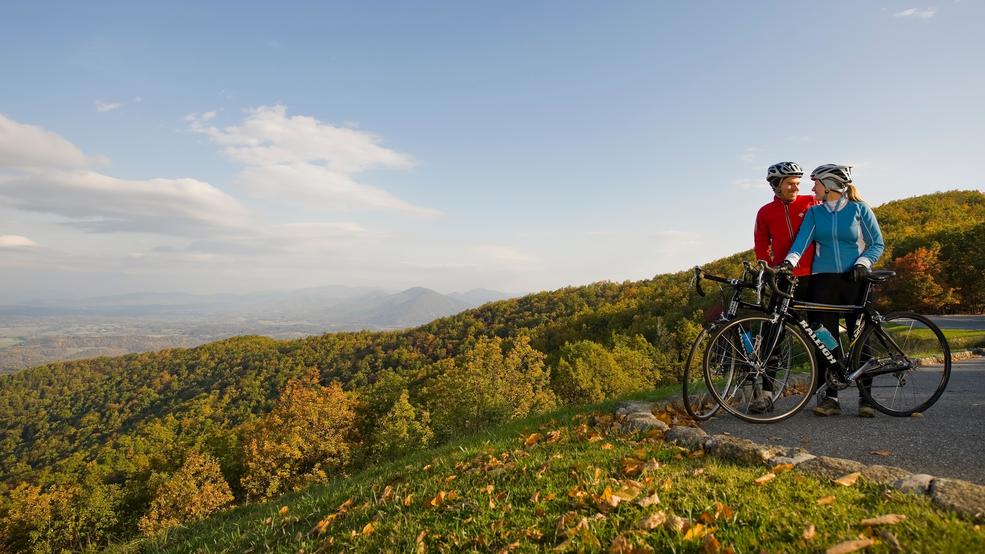 Don’t worry about feeling guilty while chillaxing during your long, lazy weekend escape to Franklin County, the front porch to Virginia’s Blue Ridge Mountains and the “Moonshine Capital of the World.”

Urbanites quickly find the virtue in enjoying a slice of the good life in Southern Appalachian where D.C.’s daily grind is easily slayed by a morning mountain trail run under a gold-hued sunrise, a serene kayak spin on Smith Mountain Lake’s glassy surface, cycling along the Blue Ridge Parkway, or discovering the pleasures of spirited mountain folk music at stops along the region’s fabled Crooked Road.

Drive a short four hours from the District to the historic town of Rocky Mount, Va., and you’ll be met with serious barbecue, staggeringly cool music, cold local craft beer and warm hospitality. Pack light, as jeans and tees are the uniform of choice around these parts, where the pace may be a bit slower than you’re used to, though there’s plenty of adventure to be found.

It’s true the Great Conspiracy Trial of 1935 resulted in charging 80 for the illegal production and distribution of un-taxed moonshine whiskey in Virginia, earning Franklin County the moniker of “Moonshine Capital of the World,” though the mystique surrounding mountain-made liquor is more Hollywood legend than the facts support.

Forget what you saw in Lawless, the 2012 violent bootlegger film inspired by Franklin County’s Bondurant brothers. Moonshiners of that era were driven by depression economics, the need to care for their families and a time-tested method to bring their crops to market.

A third-generation distiller and champion storyteller, Prillaman learned at the knees of his father and more than one or two old-timers who’ve enjoyed government-sponsored “vacations” over the years. Visitors to the Henry, Va. tasting room enjoy neat pours and cocktails made with the likes of 1st Sugar Moonshine, Sweet Mash Rye, 100-proof Copper Corn, and Blackberry, Peach or Pear Brandy.

Franklin County Distilleries is in tiny Boones Mill, Va. where the population count of 250 belies the 28,000 vehicles a day that cross its threshold on busy Highway 220. The unincorporated town was home to the Bondurant Store during Prohibition and a choke point where bootleggers transferred cargo to the syndicates for national distribution.

FCD is proud to carry on the legacy, sharing their White Label Corn Whiskey and more than half-a-dozen other spirits including Roanoke Rum and Rocky Mount Rye Whiskey with their patrons.

Their tasting room shows off antique stills, sports an enormous patio for sipping in the sun, and pours some saucy-good cocktails. Try the El Fuego del Maize (The Fire of Corn), muddled fresh jalapeno, cilantro, radish, lime, special El Fuego agave-based syrup, and Corn Whiskey - a bit of heat and sweet, they go down easy but watch out for a delayed kick.

In just four short years since its 2014 opening, Rocky Mount’s Harvester Performance Center has established itself as a must-visit stop on Virginia’s legendary Crooked Music Trail. The former tractor dealership has been thoughtfully converted to an intimate concert venue with a main stage room accommodating up to 475 patrons and a clubby downstairs setup seating 200.

Geographically situated as a gateway between the big northeast cities of New York, Philadelphia and D.C. and the southern burghs of Raleigh, Charlotte, Atlanta and Nashville, Rocky Mount lures top-tier acts looking for fill-in stops along their tour. Big names like Willie Nelson, Lee Ann Womack, Tower of Power, Los Lobos, The Mavericks, Michael McDonald, Blues Traveler, Henry Rollins and Taj Mahal have all graced the stage here. More than 175 shows annually ensure a great show whenever you visit.

For a deeper exploration of traditional mountain roots music, bluegrass, the blues, Rockabilly, and Blue Ridge folklore, stop in at the Blue Ridge Institute and Farm Museum at Ferrum College. It’s one of eight major venues along The Crooked Road: Virginia’s Heritage Music Trail and home of the annual Blue Ridge Folklife Festival.

The Crooked Road Royalty & Musical Styles exhibition here highlights the tradition of mountain picking and singing featuring four powerhouse Virginia groups that were the foundation of early country music. The Hill Billies, the Stoneman Family, the Carter Family, and the Stanley Brothers have their careers on display, including some prime early video of the legendary Ralph Stanley.

Follow the Crooked Road a short drive to Shooting Creek Road for access to the Blue Ridge Parkway near mile marker 159. Take a scenic cruise along the Parkway or use this access point for cycling on one of America’s most awe-inspiring byways.

Combine history and hiking in one outing at the Booker T. Washington National Monument. The site is the birthplace and former slave plantation where America’s most prominent African American educator spent his formative years prior to emancipation after the Civil War. The well-marked trail network on site offers short, easy loops touring the grounds and a longer 1.5-mile Jack-O-Lantern Branch Heritage Trail through nearby forest and fields.

With more than 500 miles of shoreline, Smith Mountain Lake is one the most popular lakes in Virginia and is known as the jewel of the Blue Ridge. Experience the rush of flyboarding with Wet Connection at Crazy Horse Marina. A favorite stop for water sports enthusiasts along SML, Wet Connection offers rentals of ski boats, jet skis, pontoons wakeboards, kneeboards and tubes.

Philpott Lake is a hidden gem in the shadow of SML. Heavily frequented by locals, Philpott is known for Bass fishing, quiet coves and chill beaches. Campsites are available for those looking for the ultimate in Blue Ridge immersion.

Save time for a visit to Old’s Cool, a retro shop featuring '50s, '60s and '70s vintage toys, comic books, LPs, kitchenware, home accessories and the coolest vintage nick-knacks from a recent era gone by.

Make your first stop Buddy's BBQ in Rocky Mount for some of the best ribs, brisket and pulled pork on the planet. Allen “Buddy” Hancock knows low and slow make for great ‘Q and he delivers.

B-Sides in Rocky Mount is a cool local joint that gets it right with giant burgers, hot wings, hand-cut fries and plenty of cold local brew. Just across the street from the Harvester Performance Center, B-Sides is a great stop before or after the show.

Realize your dairy dreams at Homestead Creamery in Wirtz, Va. This place is money - the happy cows here make the best milk, cheese and ice cream, with more than a dozen flavors to try; purists stick with traditional vanilla, and we'd recommend it.

Surrounded by corn and newly planted hops fields in Calloway, Va., Chaos Mountain Brewing is turning out some fine lagers, pilsners, ales and specialty brews. In only their fourth year of operation, Chaos is firing on all cylinders with a welcoming tap room, handmade craft pizzas and no less than 16 beers on rotation flowing from their taps. Their flagship Squatch Ale is a Scottish style that’s a “wee bit heavy” but oh-so tasty.

Rocky Mount’s Early Inn at the Grove is a comfortable B&B only a two-block walk form the Harvester Performance Center. Quiet, charming and boasting beautiful public rooms, the T-shaped Greek Revival manse was originally built in 1854. Situated on 10 acres, the Early Inn offers guests a cozy escape from their cares.