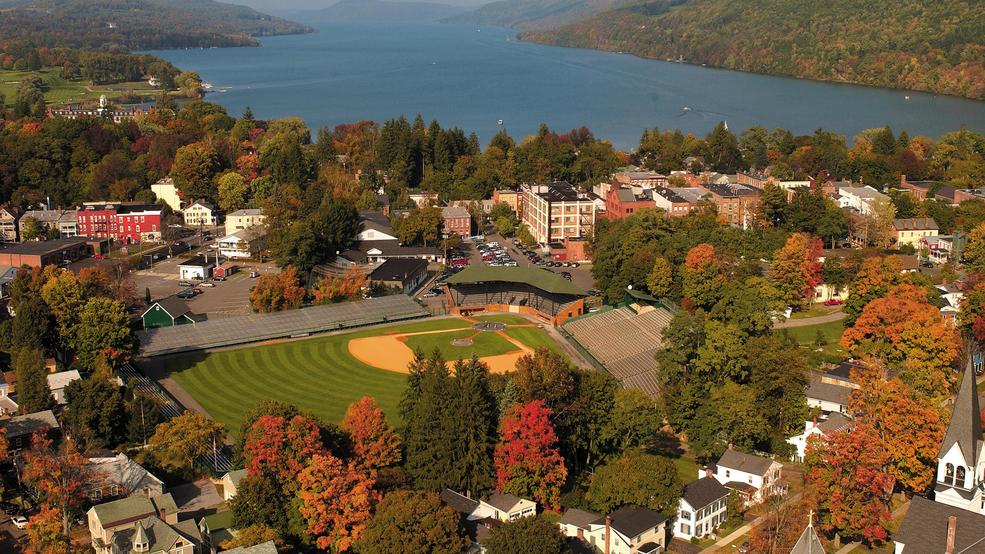 Cooperstown is nestled between the Adirondacks and the Catskills in Central New York. It’s a one-stoplight town void of fast food outlets or mall stores. The town likes to say of all its attractions, its authenticity is the greatest and it has been nicknamed “America’s Most Perfect Village.”&nbsp; (Image: National Baseball Hall of Fame and Museum)
SEE MORE

If the hoopla surrounding the All-Star Game and the news that Bryce Harper is staying (for now at least) has whet your appetite for more baseball, think about a trip to Cooperstown, New York and the National Baseball Hall of Fame and Museum. It’s the ultimate venue to celebrate America's favorite pastime.

The museum will keep you engaged with interactive exhibits and multimedia presentations. It’s chock-full of artifacts – bats, balls, gloves, uniforms, awards, tickets and collectibles, from the mid-19th century to the present. There are 140,000 baseball cards, photographs, newspaper clippings, and photos of stadiums from the golden days.

While nirvana for baseball fanatics, don’t fret if you’re just a casual fan as I am, this is for you too. You’ll see documents and artifacts from the All-American Girls Professional Baseball League which ran from 1943-54 and inspired the movie A League of their Own. Explore more of Jackie Robinson's story of becoming the first black athlete to play Major League Baseball and what he faced. Hear about the curse of Babe Ruth, the “Great Bambino,” and how long it took for the Red Sox to break the curse. There is even a local story to pursue. Walter Johnson, a pitcher for the Washington Senators and the namesake of the North Bethesda high school, is in the Hall of Fame.

And, of course, there’s the Plaque Gallery. Light streams through the dramatic arched entryway with soaring ceilings, and dark marble columns that lead you to where the bronze plaques of all the Hall of Famers line the oak walls. But remember, of the more than 19,000 ball players who have graced Major League Baseball, only one percent have been enshrined in Cooperstown, including the first female Hall of Famer, Effa Manley.

Walking distance from the Hall of Fame is the Otesaga Resort Hotel, which was built in 1909 on a beautiful scenic lake. The resort marries charm and the gracious hospitality of a bygone era with today’s modern amenities and conveniences. Choose from a wealth of activities including biking, boating (canoes, row boats and paddle boards), fishing, swimming in the lake or heated outdoor pool, playing tennis, walking/running paths and golfing on a magnificent lakeside championship course. Afterwards, sip a drink on a porch rocking chair overlooking the lake. And there is a spa on property for pampering and unwinding. When it’s time to eat, choose from casual patio dining, fine dining inside, or perhaps sitting around the fire bar. All offer panoramic sunset views on the lake.

Want something more intimate? The Cooper Inn, a Federal-style manor built in 1813 and converted to an inn in 1939, is located even closer to town. Continental breakfast is included and so are privileges to all the recreational facilities at The Otesaga Resort Hotel.

Cooperstown is nestled between the Adirondacks and the Catskills in Central New York. It’s a one-stoplight town void of fast food outlets or mall stores. The town likes to say of all its attractions, its authenticity is the greatest and it has been nicknamed “America’s Most Perfect Village.” In Cooperstown, history runs deep. Take a walking tour to see monuments and the architectural mix of stone, brick and wood-frame Colonial buildings, as well as Victorian gingerbread homes. The oldest frame house dates back to 1790. Learn about American author James Fenimore Cooper, for whose family Cooperstown was named, and the Clark family who continued the stewardship of Cooperstown.

If you want a little culture, visit the Fenimore Art Museum with its rich collection of American folk art, Hudson River School paintings and Native American art. With all the excitement this summer over Hamilton at the Kennedy Center, the special exhibit “Hamilton’s Final Act: Enemies and Allies,” which delves into the infamous rivalry between Alexander Hamilton and Aaron Burr through 34 letters and other documents exchanged between the pair, is a must see.

If you’re traveling with kids or happen to love carousels, go to the Farmers Museum and take a ride on the Empire State Carousel. There are 25 hand-carved depictions of New York animals, and portrait panels of notable figures like Susan B. Anthony, Teddy Roosevelt and Jackie Robinson. At the museum, there are costumed interpreters that let you look into 19th century life at a smokehouse, pharmacy and more. The 19th century farm section shows how a farm would have operated.

Since the area was once the hops-growing capital of North America, it’s not surprising there is the Cooperstown Beverage Trail. You can do a tasting, take a tour or just walk around Bear Pond Winery, Cooperstown Brewing Company, Fly Creek Cider Mill, Cooperstown Distillery and more.

Besides the restaurants at The Otesaga there are a few in town worth visiting.

Toscana is a cozy restaurant that serves delicious Italian food and has friendly staff. Mel’s at 22 serves a variety of burgers, sandwiches and salads. Alex’s Bistro is a cozy upscale bistro with an eclectic menu, including housemade desserts and cocktails.

And And don’t forget to stop for some mouth-watering ice cream (or grab some chocolates and fudge) at Tin Bin Alley before you head home!