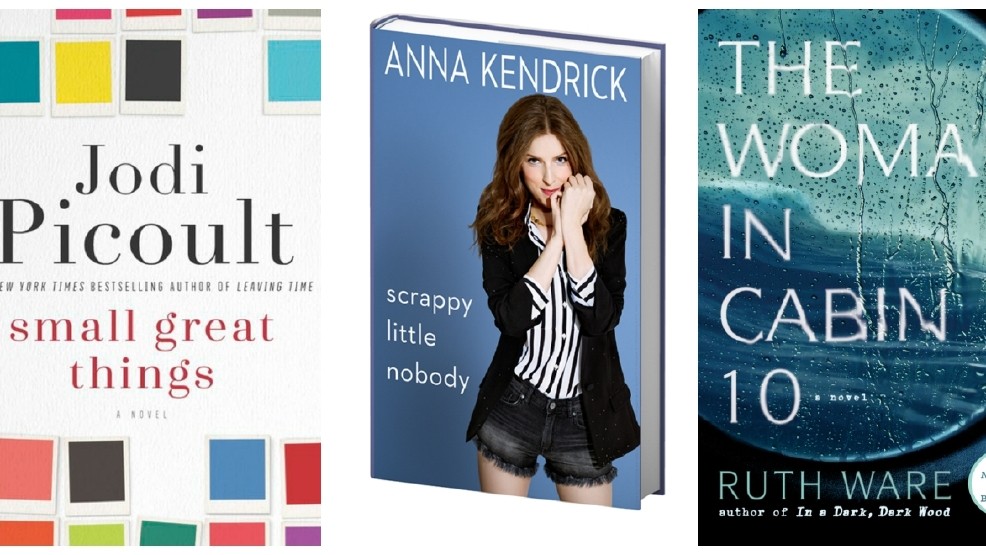 We've rounded up 10 of our hottest recommendations of books to cuddle up with this winter! So put on those fuzzy socks and grab your blankets and hot cocoa and get reading! (Each book image courtesy of publisher)
SEE MORE

10 great books to curl up with this winter

Well, guys, I think it may be official. Winter isn't coming, it's freaking here! And that means unmentionably low temperatures, wind chills that make you want to cry and snowmageddons that D.C. will just never be prepared for.

So how do we survive the season that makes us never want to leave the house again? With a lot of blankets, hot chocolate and an arsenal of good books! To help you out, we've rounded up 10 of our favorites that we've read in 2016 to keep you warm and cozy all winter long. Don't forget to share your thoughts with us on social media if you read any of our selections, and check out our Facebook page on Jan. 23 for our monthly book club. Happy reading, bookworms!

The Story:
Though this thriller was published almost two years ago now, the much-anticipated movie (starring Emily Blunt) that debuted in October of this year put it back on the map in a big way! The psychological thriller, which remained No. 1 on The New York Times Fiction Best Sellers of 2015 list for 13 consecutive weeks, will forever change the way you view stranger's lives, or more accurately the small glimpses into the lives of strangers we encounter as we go about our daily business. Set in the UK, we open on 32-year-old Rachel Watson on her daily train commute into London, presumably for work. Every day she takes that same train to and from the city, and on her way she passes by the same community. The train pauses briefly every day outside of one particular home, as it waits for the signal, giving Rachel just enough time to catch a glimpse of her favorite couple enjoying breakfast on their deck, or cocktails in the evening. She's grown so accustomed to observing their seemingly perfect life that she names them Jess and Jason. But one day, Rachel spies something shocking that shakes her to the very core, and everything is different. Rachel must decide how far she is willing to go for a stranger, and how much of herself she's willing to sacrifice in the process.

The Story:
I might as well just tell you now, you're going to notice a pattern with our selections this season: we love psychological thrillers! They keep us on the edge of our seat until the very end, and we love trying to guess what the "big twist" will be. In The Perfect Girl, we get a gander into the potentially dark and twisted mind of a teenager and child prodigy. Zoe Maisey, a musical genius, seems to be a quiet, proper girl who lives a normal life with her mother and new stepfamily, which consists of a stepfather, stepbrother and baby half-sister. But what no one in her life, besides her mother, knows is that several years ago, Maisey caused the deaths of three teenagers. She served her time and now she and her mother are trying to make new lives for themselves that do not include any mention of their seedy pasts. The story begins with her giving the performance of her life. But by midnight, her mother is dead. The themes of karma, justice and second chances are all explored in this page turner that's perfect for cuddling up with on a snowy day where you don't plan to leave the house at all!

The Story:
Ok, if I could make any celebrity be best friends with me for a day (or life!) it would totally be Anna Kendrick! I love her for all her bizarre little quirks, her charming self-deprecatory nature and the way she always seems totally comfortable with the uncomfortable. So of course her memoir was a must! In her own words Anna tells us that she was "unusually small, weird, and 10 percent defiant" long before she was a star. By the time she was a teenager she had resolved to "keep the crazy inside my head where it belonged. Forever. But here’s the thing about crazy: It. Wants. Out.” In Scrappy Little Nobody, Anna invites readers to explore all that crazy inside her head, as her way of letting it out to the world. With the same charm and wit that we see every time she does an interview, she recounts all the crazy but mostly ordinary moments that defined her childhood and made her into the lovable little weirdo she is today. If you want a good laugh, this is for you.

The Story:
If you haven't already picked up a copy of The Couple Next Door, do it now because this is January's #DCRBookClub selection! Have you ever wondered what deep secrets your neighbors keep behind closed doors? In a wealthy neighborhood in Upstate New York, Anne and Marco Conti never thought they would be at the center of a missing child’s investigation. But when their 6-month-old daughter is taken from her crib in the middle of the night while the Conti’s are at a neighbor’s dinner party, the police immediately suspect the parents. The story steers you through the ups and downs of the Conti’s relationship, money struggles and family problems, while setting up a real “who done it” case. The person you suspect took the Conti’s 6-month-old little girl will change multiple times over the course of the book.

The Story:
Spoiler alert: This is what we will be reading for February's book club, so get ahead! This New York Times bestselling book will have you second guessing your predictions from the very beginning. The Woman in Cabin 10 is definitely a roller coaster ride with twists and turns on every page. The story takes place aboard a luxury cruise line, where Lo Blacklock is on assignment for her job as a writer for a travel magazine, Velocity. The first night onboard, Lo is woken up by screaming followed by a loud splash next door. This sets the scene for the rest of the book, as Lo tries to figure out what exactly happened to the woman in cabin 10. Dedicate a day to this one, because (trust us) once you start it, you won’t want to put this book down!

The Story:
This time of year we hear a lot of conversations about how people are going to better themselves before that pesky ball drops again next year. "I'm going to lose 10 pounds" or "I'll finally fall in love" are thrown around casually without a serious plan as to how you can accomplish those goals. But if you want to get serious about living your best life, without spending a fortune to do so, Jennifer Streaks' financial help book is a must. Now don't expect any "get rich quick" tips because Jennifer isn't about that shtick -- she's helping those who are willing to actually do the work to better themselves. In this interactive month-to-month journal you'll learn to take control of your finances through action items like "March: The Tax Man Cometh," which tackles tax prep by encouraging you to review all anticipated deductions and making sure all healthcare, charitable donations and business deductions are present and accounted for. Streaks will take even the most unorganized and get them on the right track in 2017!

The Story:
If you read our summer book recommendations, you know that we love discovering new local authors to support. And this time, we are introducing you to a local fantasy author, Zachary Barnes, and his novel tackling issues of xenophobia and intolerance -- hey we never said this was light reading ;) With Avengarde, Barnes -- who has previously self-published but makes his debut in traditional publishing with this novel -- has created a fantasy world where his injured protagonist Taveol can find one final place of refuge: a city of ice and blood, perched on the frozen edge of the known world. Here he believes he will be safe. But when Taveol harbors Aerwyn, a wounded fugitive, on the eve of an ethnic cleansing, the two exiles are thrust into the middle of racial conflict dividing their city. From the gripping first-person perspective to the message warning against the seductive powers of hate, Barnes has truly set himself apart in the world of fantasy fiction.

The Story:
I couldn't resist putting the newest offering from my FAVORITE author on this list. Jodi Picoult captured my heart at a young age with her powerful novel "The Pact" (about a teenage suicide pact) due to her absolute mastery of character development. From tackling the mindset leading to school shootings or the home affects of autism, sexual abuse and many other controversial topics, Picoult presents you with some of the most raw and relatable characters you'll ever encounter in fiction. She'll break your heart at times, because you grow to care so deeply about her characters, but she never leaves you without hope for a better future. In Small Great Things, Picoult once again tackles some of the biggest challenges of our time: race, prejudice and justice. Ruth Jefferson is an African-American labor and delivery nurse with more than 20 years of experience under her belt. On one ordinary shift, she encounters a couple who refuses to let her care for their child: they're white supremacists who don't want an African-American woman touching their baby. The hospital instructs her to adhere to the parent's wishes. But when she's left alone later and the baby goes into cardiac arrest, Ruth must decide whether she will follow her oath as a medical professional and disobey orders, or comply with her instructions to the baby's detriment. As she is prone to do, Picoult challenges her readers with this one, and at times makes them uncomfortable as they are forced to face society's own prejudices and privileges.

The Story:
Imagine waking up and discovering you are not only 10 years older than you thought you were, but also discovering you don't remember a thing about those ten years! Well, that is exactly the nightmare Alice Love finds herself in. The 29-year-old is crazy in love with her husband and pregnant with their first child when she comes to on the floor of a gym -- a place she despises -- and learns that she is actually 39, getting a divorce and has three kids. How did she get here, and when the heck did she become one of those skinny moms with expensive clothes who doesn't really like her kids? Now she's left piecing her life back together, and trying to decide if she really wants to remember after all.

10. Talking as Fast as I Can: From Gilmore Girls to Gilmore Girls (and Everything in Between)
Author: Lauren Graham
Publisher: Ballantine Books

The Story:
One of the biggest pop culture stories of 2016 was the revival of the beloved TV show "Gilmore Girls," so how could we not include a book written by a Gilmore Girl?? In this collection of personal essays, Lauren Graham hits pause for a minute and shares her own tales of childhood, life as a star and the challenges of being single in Hollywood. Oh, and um... she also tells us about the time she was asked to audition her butt for a role. If that doesn't have you racing out to the bookstore then I don't know what will. And of course, she dishes on all things Lorelei Gilmore, from what it was like being cast in the role and what it felt like to pick it back up nine years later.