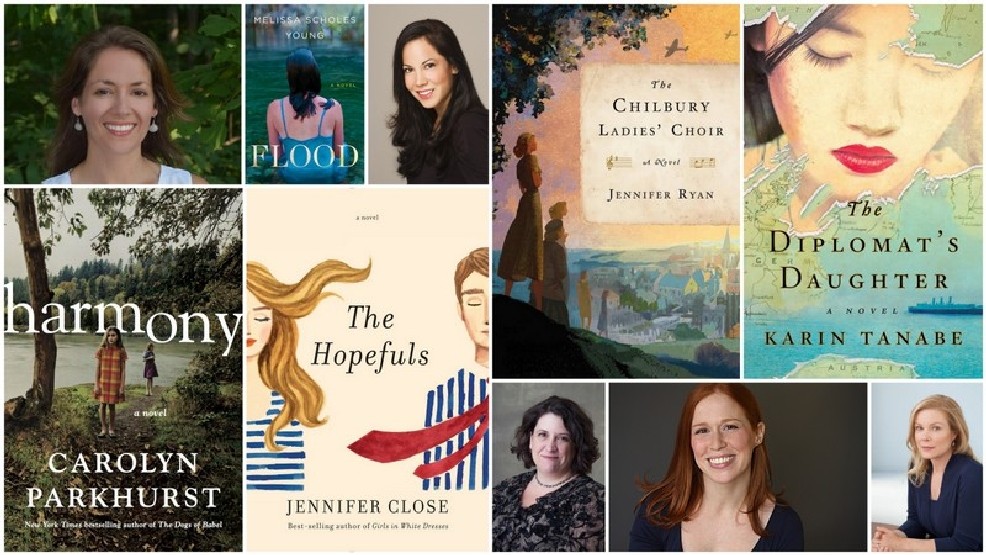 Somehow it’s become an accepted “fact” that nearly all writers live in Brooklyn … but D.C.’s got a great literary scene, too! We’ve got great independent bookstores, shedloads of author events and more writers than you can shake a stick at. Here are just five of the great books out this year by authors from the DMV area. (Images: Courtesy each author)
SEE MORE

5 D.C. authors you should know (and their latest books)

Somehow it’s become an accepted “fact” that nearly all writers live in Brooklyn but D.C.’s got a great literary scene, too! We’ve got great independent bookstores, numerous author events and more writers than you can shake a stick at. Here are just five of the great books out this year by authors from the DMV area.

Jennifer Ryan lives in D.C. now, where she got her MA in Creative Writing from Johns Hopkins. But she was born just outside London, in the Kent Countryside, and her village was the ideal inspiration for Chilbury -- where she has set her first novel. The story begins as World War II does, and we’re introduced to five women and girls through letters and journals they write. There’s a villainous midwife, a self-important teenager, her flirtatious older sister, a young Jewish refugee, and a widow whose son is away, fighting the Nazis. There’s the eponymous choir, of course, and the sad facts of war and bombs, but there’s also gossip, love affairs, and all kinds of shenanigans. Throw this one in your beach bag and you won’t be disappointed.

Jennifer Close knows the inner workings of D.C. and its colorful cast of characters from deep and personal experience. It shows in this book, her third, about a young married couple. Beth and Matt move here because of Matt’s job – it’s 2008, and he’s fresh off the Obama campaign and now in the White House. You’ll laugh at her descriptions of the different Safeways and how they got their nicknames, and the various things to possibly love or possibly hate about this city we call home. But The Hopefuls isn’t just a book about D.C., or about campaigns -- it’s also a book about marriage and friendship and how ambition can affect both.

Harmony is the fourth adult novel by Carolyn Parkhurst, who has an MFA from American University. She lives in D.C., as do the fictional Hammond family, the characters at the center of Harmony. They’ve tried everything to help Tilly, their eldest daughter, who is off-the-charts smart but deeply challenged socially. Enter Scott Bean, an “educational consultant” under whose influence the Hammonds sell everything and move to a “family camp” in New Hampshire. Or is it actually a cult? The Guardian said it best: "This is a fascinating novel, at once challenging and compassionate, thrilling and thoughtful. It asks tough questions about what happens to people who don’t fit predetermined patterns, and what it means to be normal."

Melissa Scholes Young is a professor at American University these days, but, like Mark Twain, she’s originally from Hannibal, Missouri. Her debut novel, Flood, is an homage of sorts to the small town, to which its protagonist Laura Brooks returns ten years after she left at eighteen, supposedly for her high school reunion. Nobody knows why she is really back, though, but she’s quickly immersed in the lives of those who still live there, including Sammy McGuire, the man she once loved.

Karin Tanabe is a long-time Washingtonian whose debut novel, The List, was heavily inspired by her time as a Politico reporter. Her books span all kinds of themes, geographies, and eras. Her latest is set in World War II and dedicated to “all those seeking refuge today" so it couldn’t be more timely. Emi Kato is Japanese, the eponymous diplomat’s daughter, and she is imprisoned in an internment camp in Texas. She falls in love with Christian Lange, another prisoner, and after Emi’s family is sent back to Japan, Christian enlists in the Army, hoping he’ll find Emi again. What he doesn’t know is there’s another man back home, one whom Emi might still love. A love triangle for grown-ups, this one promises to hold your attention as you lounge by the pool.