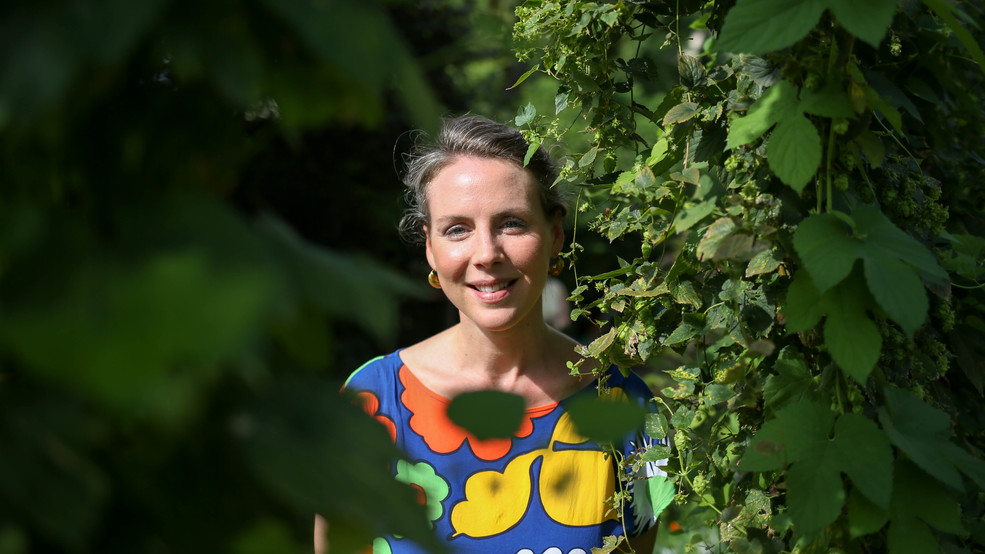 As the historian of the American Brewing History Initiative at the Smithsonian’s National Museum of American History, Theresa spends her work hours cataloging, researching and documenting every aspect of American beer from the past to the present. (Image: Amanda Andrade-Rhoades/ DC Refined)
SEE MORE

Dr. Theresa McCulla, PhD, has probably the coolest job of all time. As the historian of the American Brewing History Initiative at the Smithsonian’s National Museum of American History, Theresa spends her work hours cataloging, researching and documenting every aspect of American beer from the past to the present.

Theresa was born in D.C., but even as her family moved around the East Coast, beer was never far from the kitchen table - her father was a home brewer. However, it was Theresa’s time as an undergrad at Harvard where she developed in interest in other cultures, and the food that comes along with it.

After graduating with a degree in Romance Studies, Theresa worked as a foreign media analyst for the CIA. At night, she sought out more fulfilling work in the restaurant industry.

“I sent a lot of letters to chefs around town saying ‘you know, I don’t need pay, I just want to know what it’s like to be in a restaurant kitchen for an evening a week,'" Theresa says.

She faced a lot of rejection, but restaurateur Michael Landrum gave her a chance; she prepped salads and made desserts at Ray’s The Steaks in Arlington.

After quitting the CIA, Theresa went to culinary school. She then returned to Harvard to obtain both her master’s degree and her doctorate, which she completed last year. Since taking up her post at the Smithsonian, Theresa says she’s been greeted with a lot of enthusiasm, due to both her subject of study, and her gender.

“It is certainly a fact that the brewing industry now is dominated by men as producers and consumers," she said. "There are fewer women that identify as regular beer drinkers, and fewer people of color that identify as beer drinkers, and there are a lot of historical reasons for why that has come to be. Women have always been a part of the story and I’m a historian. I always take my cues from history.”

Theresa’s job includes building up contemporary records on beer making across the United States so that future historians can look back at what was brewing in 2018. However, Theresa is keenly aware that the narratives of the past are incomplete, as they've been white-washed and male-dominated.

The recorded history of brewing can be somewhat murky, because up until it became a profitable industry in the 1800s, beer-making was considered a chore, meaning it was left up to women and people of color, especially slaves. Often, the names of those early brewers have been lost to time, their narratives shoved out of view. One such example Theresa has come across in her research is an enslaved woman in North Carolina in 1740.

"We don’t know her name because, at the time, her name was not considered important enough to be recorded, but she was important," says Theresa. "She made beer and bread and fed those around her, despite her enslaved station. American brewing culture began with humble, unnamed origins like that, and now we have the most dynamic beer culture in the entire world.”

Theresa has made a point to include the narratives of both women and people of color as she records brewing history for future researchers. Both groups are on the rise in the beer industry, as consumers and producers, and their stories are valuable.

According to Theresa, women have been increasingly prominent in beer because women are reaching out to support other women.

“Groups like the Pink Boots Society, women’s beer appreciation clubs, women-owned breweries, and a widening world of brewing science programs, internships, and mentorships are showing women that they can, and do, excel at every point in the beer production and consumption process,” she said.

“I have benefitted so much from the mentorship of others,” she said. “I very much hope to mentor those who intend to work in similar fields.”

Editor's note: D.C. is full of incredible women who have built remarkable lives and careers. Extraordinary Women of D.C. is our new, monthly feature devoted to the women who inspire us the most. If there's an extraordinary woman in your life who you think should be profiled, please drop us a line at aandrade@dcrefined.com