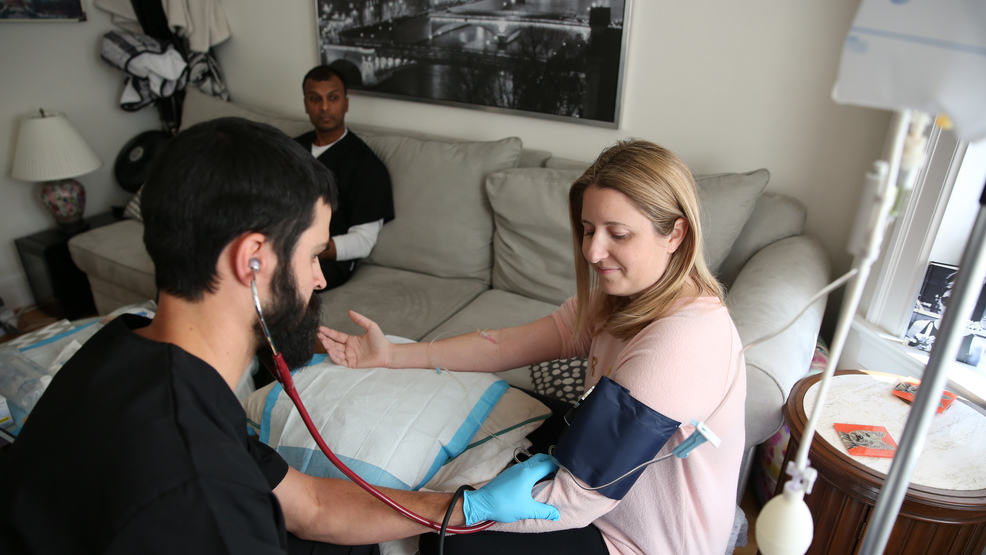 "When you take medications or consume water orally, you typically lose about 50 percent of what you take through normal excretion or metabolism," said Dr. Nagula. "With IV therapy, 100 percent of the fluids and medicine is injected straight into your veins, and you feel relief that much faster." (Image: Amanda Andrade-Rhoades/ DC Refined)<p></p>
SEE MORE

I got drunk and let the I.V. Doc cure my hangover

On Saturday morning, I woke to a chorus line of overweight elephants performing a raucous version of the Cupid's Shuffle on my cerebellum, a dry mouth that would give the California drought a run for its money, and it appeared that the eerie morning fog that had blanketed the DMV the week prior had taken up residence in my bedroom, preventing my synapses from firing on all cylinders. Believe it or not, I had gone to bed the night prior hoping to feel this way!

Before you question my sanity, no, I am not a masochist, and yes, I do have all my mental faculties intact (most days). I engaged in this deranged behavior for your benefit, dear readers! The I.V. Doc was rolling up to my apartment at 11 a.m. the next day to administer IV hydration therapy in an attempt to cure a hangover, and in order to give you a proper review of his services, I had to be hungover. Ah, the lengths I'll go to in the name of journalistic research!

The D.C. branch of the I.V. Doc, the region's only provider of concierge intravenous hydration treatments, was launched by Doctor Diva Nagula -- who was a patient himself last New Year's Eve in Vegas -- on January 1, 2018. The company, which was founded in New York in 2013, peddles its services in 19 cities across the country from New York to Miami, San Francisco and Los Angeles and has expanded internationally to London and Ibiza. The claim is that IV bags filled with a cocktail of vitamins, saline solution (known as lactated ringers), and pain medications -- administered by registered nurses in the comfort of your own home -- will alleviate dehydration, nausea and fatigue, typical symptoms of someone suffering a hangover. But how is this any different than chugging glasses of water and taking aspirin like it's candy?

"When you take medications or consume water orally, you typically lose about 50 percent of what you take through normal excretion or metabolism," said Dr. Nagula. "With IV therapy, 100 percent of the fluids and medicine is injected straight into your veins, and you feel relief that much faster."

A hangover is not the only thing that can be positively affected by IV therapy, however. Those inflicted with the flu, food poisoning, jet lag, a migraine or even athletes dehydrated from rigorous exercise may experience many of the same symptoms a hungover person feels, and can benefit from intravenous fluids.

"One of the most common calls we've had since opening in D.C. has been from patients with the flu, or those exposed to the flu," said Dr. Nagula. "We know this particular strain of the flu we're seeing this year is unusually bad, so a lot of people experiencing its symptoms need extra relief, and turn to us. Or those exposed are using IV therapy as a form of prophylaxis and an immune boost."

But knowing my Friday night companions -- Mr. Cheap Wine and Mrs. Sugary Cocktail -- would leave me hurting, I booked the package Dr. Nagula recommends for treating hangovers. The revive package, one of 11 packages offered on the I.V. Doc's website, claims it will offer "deathbed relief" and combines up to 2000ml of lactated ringers, Zofran (anti-nausea), Pepcid (anti-heartburn) and Toradol (anti-inflammatory) in the IV bag. Almost immediately after booking my appointment, I received a confirmation email, followed by a consultation call from Dr. Nagula himself who took a detailed account of my medical history, and the symptoms I was feeling that had led me to book the appointment, before answering my questions about the treatment.

When they arrived Saturday morning, Dr. Nagula and his nurse Casey were a welcome sight for my sore (and barely opened) eyes. After introductions, Casey asked where I'd like to set up (my couch) and he got to work assembling all the collapsible equipment he had transported in a single backpack. He reviewed the questions Dr. Nagula had asked me, double checking on allergies and whether I had previously had any negative reactions to IV treatments, before taking my baseline vitals.

"We take vitals before, during and after the treatment so we can monitor how an individual's body reacts to the IV," said Dr. Nagula. "If heart rate or blood pressure spike during the treatment, that can be an indicator that we need to adjust the amount of fluids or medications."

Next it was needle time. I'm not typically bothered by needles, and the insertion of the IV tube barely registered as a prick before a slight cold sensation ran through my body. Dr. Nagula says his team of nurses are all experts in administering IV treatments, and have learned numerous ways of distracting patients who may be squeamish around needles. Casey explained every medicine that was going in the bag and what it would target (toradol for my headache, vitamin B complex for my general malaise) and checked in every few minutes to judge my pain level. I started at a six, pain wise, and within 15 minutes of the fluids being administered, it was down to a three -- my grogginess had evaporated and my headache was more of a slight irritation than a constant pound. The treatment worked so well, I didn't even need the full 2000ml of saline, and we stopped halfway through my second bag. By the end of my 40-minute treatment, I had no pain whatsoever and was ready to go workout and get on with my day!

Considering I just told you IV therapy can cure even your worst hangovers in less than an hour without even leaving your house, you might be wondering what the catch is. Like many of D.C.'s most popular offers, the catch is price. Services range anywhere from $199 (the basic cleanse with 1000ml of lactated ringers) to $269 for the revive package all the way up to $399 for flu relief, a package called "Beautify" (which has been rumored to be a part of Kim Kardashian's pre-gala routine) and antioxidant therapy. Supplements such as a $75 Glutathione IV push or a $150 Vitamin C boost can be added to customize any package.

I admit, I was a total skeptic going into this process. Only time, rest and blue gatorade (because blue gatorade has magical powers) had ever managed to cure my hangovers in the past. But for me, the proof was in the intravenous pudding.

"It's one of those things that you have to try it to believe it," said Dr. Nagula. "But once you try it, and feel the benefits for yourself, you're hooked!"

You can watch the entire treatment process below: