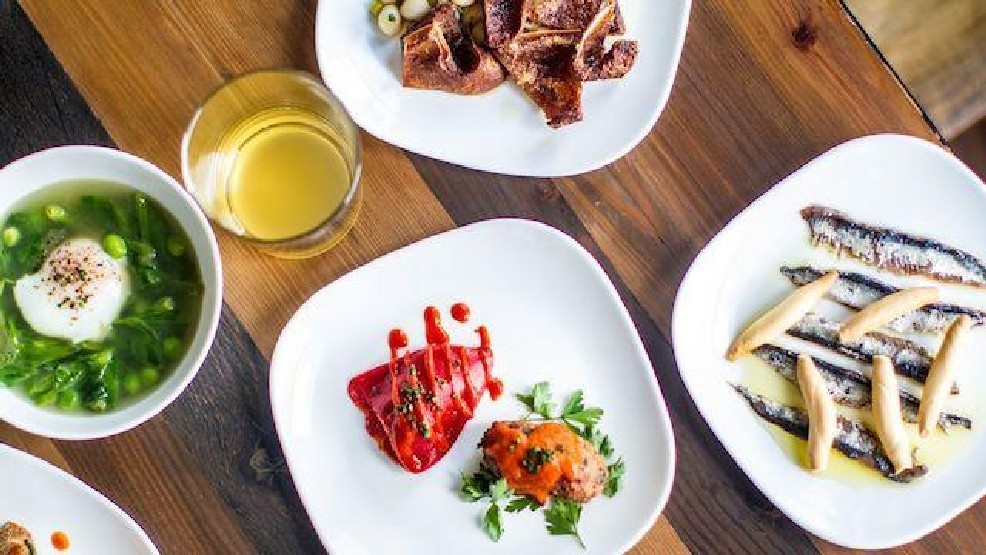 At a time when many of the city’s most exciting new restaurants highlight Asian cuisines, it’s particularly notable when three fresh Spanish dining rooms enter the scene within a year’s time. If what you know about Spanish food starts with tapas and ends with paella, these places are here to tell you that there’s so much more to explore.

Pintxos might just be the new tapas. These bar snacks hail from Basque country and are usually served on sticks but here can also include garlic soup or anchovy and salmon roe toast. At Anxo, which opened last summer, you’ll find a gorgeous display of pintxos lining the bar that can be ordered per piece for $3–$9 each. Perhaps equally important is to wash them down with either the house-made Basque-style ciders or those imported from Spain. After whetting the appetite at the bar downstairs, head to a table upstairs to indulge in traditional dishes of northern Spain from chef Alex Vallcorba, a native of Barcelona. Must-try dishes include the stuffed squid and the fried pig ears, although there’s also a steak and a plate of meatballs if adventurous eating isn’t your style. Those on a date might want to try the Cider House menu for two, which includes four shareable courses and three bottles of cider for $125, and the restaurant launches brunch this weekend. This spring, a tasting room is scheduled to open in Brightwood Park, selling cider and serving as a neighborhood bar Wednesday through Saturday nights.
300 Florida Ave. NW

Javier Candon, one of the owners behind SER Restaurant in Ballston, opened this Capitol Hill ode to his father — and his homeland’s cuisine — in January, bringing David Sierra on board to serve as executive chef. The Madrid-born chef most recently cooked at SER as well as at Fiola Mare and Taberna del Alabardero. One cool thing about this place is that you can order all savory menu items in three sizes: tapa, half ración and ración (so basically, small, medium and large). You’ll want to start with the hand-cut Iberico ham and aged Manchego cheese, of course, but also an order of the Tuna carpaccio, avocado mousse, spring onions, almonds and the Roasted sardines, tomato water air , basil, black garlic. Chicken liver terrine, sherry pearls and Skate wing made the way Candon’s mother used to make it are two other standout dishes. Candon is a talented cocktail maker, so definitely try one of his creations, such as the Gallito, a blend of tequila, elderflower liqueur, tarragon syrup and grapefruit.
660 Pennsylvania Ave. SE

From the team behind such DC hot spots Provision No. 14 and The Prospect, this new Clarendon restaurant focuses on pintxos and sangrias — eight sangrias, to be exact, including two frozen versions. Well-known local mixologist consultants Chad Spangler and Glendon Hartley of the Menehune Group spearheaded the cocktail program, and we loved their Rebujito, a blend of pisco, fino sherry, sparkling wine, lemon and bell pepper. Of the sangrias, the frozen white passion fruit and the sparkling were among our favorites. The kitchen is still getting its groove, so stick with the simpler stuff when it comes to food, such as the spiced marcona almonds, the olives and a plate of Serrano ham cleverly topped with a scoop of olive oil ice cream, caperberries and pequillo peppers. It’s a risky and slightly gimmicky dish that pays off in flavor and texture. Be sure to try the St. James almond cake filled with bay leaf Catalan cream before you grab the check.
3100 Clarendon Blvd., Arlington