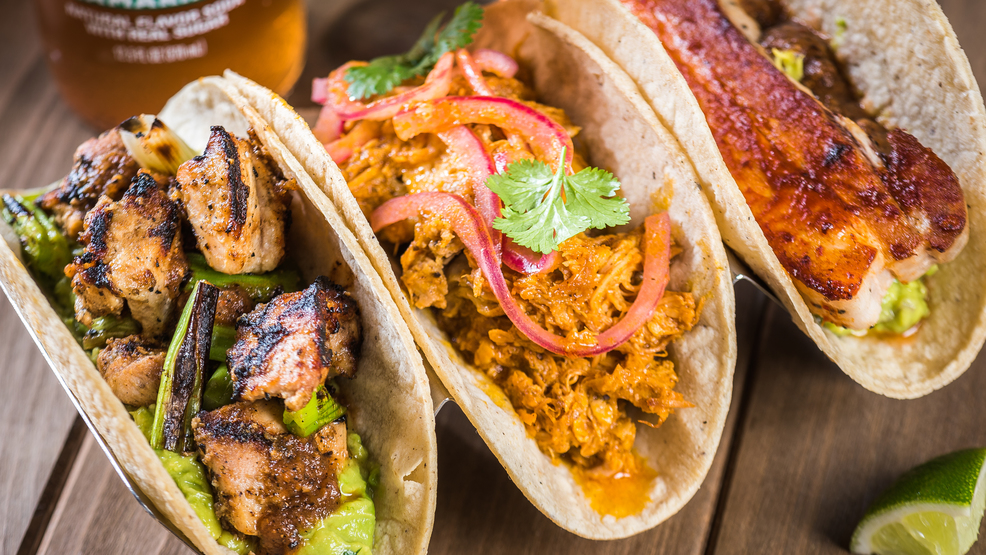 If you’ve understandably been holed up this spring waiting for the sun to come out, it’s time to get over it. Some things are worth getting soaked for, such as checking out some of the hottest restaurants that have opened this month.

José Andrés might hail from Spain, but he’s proven beyond a shadow of a doubt with Oyamel that he and his team know how to honor the culinary traditions of Mexico. With this new pop-up at ThinkFoodLab near the Navy Memorial, Washingtonians receive a preview of the street food — such as tortas, tacos, salads, snacks and Mexican ice pops called paletas — before it opens in its new home at DC United’s Audi Field, which is expected to debut in July. Those who wander in between 10 AM and 4 PM can order such items as tacos made with heirloom corn tortillas stuffed with Yucatán-style barbecued pork or grilled trumpet mushrooms with guac; grilled shrimp-stuffed sandwiches; and otra cosas, or “other things,” like a sort of Mexican poutine with mole and queso fresco.

The Wharf is pretty much the gift that keeps on giving, including the recent mid-May opening of Lupo Verde’s sister restaurant, this 68-seat ode to Southern Italian fare headed up by executive chef Todd Sprik. Try such items as a basket of fried calamari, sardines, clams, head-on prawns and lemon; a duck-egg salad with asparagus, arugula and bottarga; and orecchiette tossed with spicy sausage, rapini and ricotta salata. The restaurant, which also serves pizzas, share plates and housemade pastas, is open daily from 11 AM–11 PM with plans to start brunch service and open a 28-seat patio in mid-June. Sip one of the wines from the Italian-only list or opt for a cocktail from consulting mixologist Francesco Amodeo, who owns the local Italian liqueur company, Don Ciccio & Figli.

Mikko Kosonen served as chef to the Finnish ambassador for 15 years, and now any old Washingtonian can nosh on healthy, modern Nordic cooking at his namesake café, which opened just east of Dupont Circle May 1. Those unfamiliar with the food of Denmark, Finland and Sweden can expect house-smoked salmon, open-face sandwiches with toppings like shrimp salad with dill and lemon or roast beef with potato salad and horseradish, and pastries like cinnamon rolls and cardamom buns. The café opens most days at 7 AM (except Sundays, when they open at 10 AM), and the menu changes frequently but is regularly updated online.

Pining for Parisian fare? Check out this new all-day eatery near the White House that kicks off weekday breakfast at 6:30 AM with such dishes as a croque madame, citrus French toast and banana-Nutella crêpes. The lunch and dinner menu, offered starting at 11 AM, features all the classics of a traditional French brasserie, including steak frites, escargots and tuna niçoise. Try the gigantic order of Bouillabaisse, meant to feed at least two, and the Instagrammable pavlova dessert. The bar mixes up shareable drinks served in carafes, like the Spiced Manhattan and a French Aperitif, and the French Daiquiri receives a spritz of absinthe from a 1920s perfume bottle.

While technically two separate restaurants, we’re going to go ahead and count it as one since they’re found under the same convenient roof near the Silver Spring Metro station, and they are both owned by the restaurant group behind Ambar. TTT, which stands for Tacos, Tortas & Tequila, is a fast-casual taqueria open for lunch and dinner with plans to add breakfast in the near future. Upstairs, Buena Vida cooks up Latin small plates like guajillo-spiced tuna with watermelon and smoked crema fresca and a mezcal-cured salmon tostada with avocado salsa verde and smoked trout roe. Deal-seekers will love the all-you-can-eat deal at Buena Vida, which costs $35 at lunch and brunch and $19.99 at lunch, and the restaurant has already kicked off brunch service.