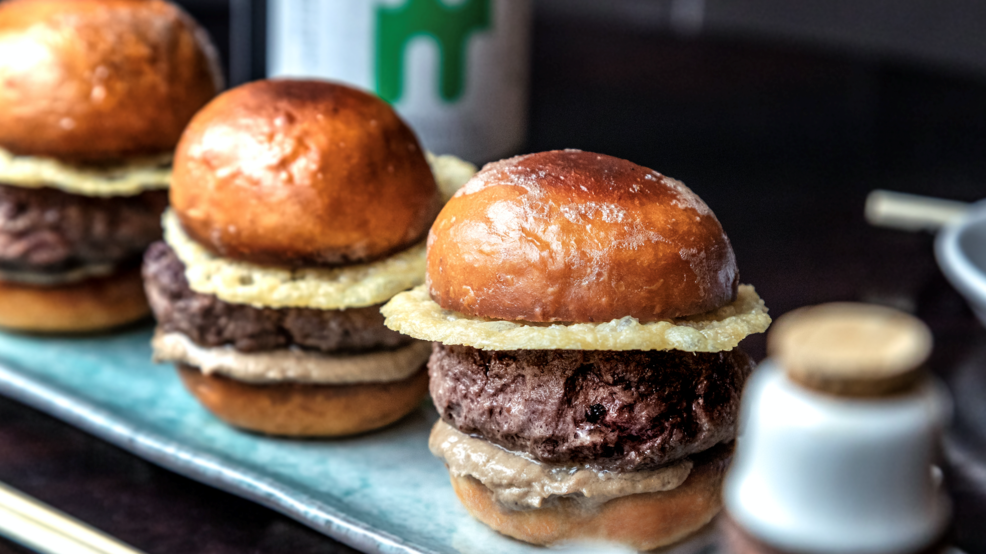 5 surprising spots to get awesome burgers

You expect to find burgers on the menu at steakhouses, diners and bars. But there are plenty of places where one would be an anomaly. From a sushi joint to a taqueria – and several unexpected points in between – here are five surprising spots where you can get an awesome burger.

Johnny Spero’s fine dining redoubt, hidden down a cobblestone alleyway in Georgetown, focuses on New American cuisine delivered with Nordic precision and a Michelin-mindset, thanks to the chef’s time working at Minibar and staging at Noma. Not exactly the kind of place you’d expect to find a cheeseburger, but it’s a popular item, working especially well as an intermezzo between dinner and dessert. Arriving on a Martin’s Big Marty sesame bun, the patty is forged from dry-aged ribeye trimmings and comes topped with miso-cured pickles, smoked cheddar sauce and buttery onions.

The brassy and buzzy newcomer in Dupont Circle’s glitzy RL Hotel offers modern-minded takes on traditional Peruvian cuisine. Burgers are definitely not native to the Land of the Incas, but that hasn’t stopped the culinary team from putting together a memorable meaty monster dubbed the Que Bestia (What a Beast). An Angus beef round is slipped into a pretzel bun and finished off with tomato-panca chutney (the latter component is a smoky, spicy, sweet Peruvian pepper), rocoto pepper aioli and shoestring potatoes. Super savory with plenty of umami and a nice crunch factor, it would be a standout burger no matter where it was served.

Okay, this taco is clearly not a burger, but it tastes exactly like one. Available only at the nonconformist taqueria’s Chinatown location, the Royale with Cheese is a glorious paean to the Big Mac – with a couple of Mexican-ish flourishes thrown in for good measure. Chopped patty melt burger, onions, Chihuahua cheese, lettuce, tomato, pico de gallo and housemade Thousand Island dressing are presented in a flour tortilla trench. Close your eyes and you’ll swear you’re biting into a burger.

You know any burger served in a vegan Israeli restaurant is not going to be your usual quarter pounder with cheese. Their griddle-seared patty is made with 15 different vegetables and legumes, and comes piled high with arugula, pickled turnips, slow roasted tomatoes, tahini and charred onions. It arrives slipped into a fluffy pita, on a mound of rice and lentils, or atop salad greens. Diners favorite hacks include adding almond feta, smashed avocado and fiery harissa.

Tucked away in Mount Vernon Triangle, Michael Schlow’s sushi bar serves the usual nigiri, sashimi and maki rolls. However, it’s worth adding a Kobe beef slider (or two) to your order. It's dressed up with what the menu calls “umami flavors.” In reality, that’s parmesan and black truffle emulsion. The primo patty arrives on a housemade milk bun seared in brown butter. Don’t even think about asking for ketchup.