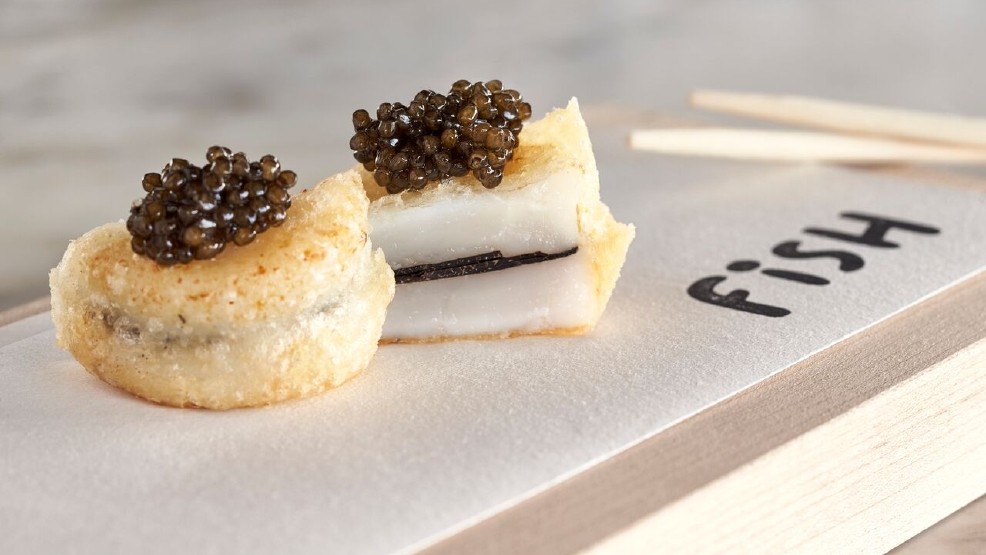 If you’re driving all the way out to MGM National Harbor, you’re probably willing to wager a few dollars at the blackjack table — but you’ll want dinner to be a sure bet.

Fish by José Andrés is one of three celebrity-chef options, and the gorgeous restaurant with a view of the water just launched Maryland Fry Bar. As the name suggests, it’s a five-seat bar dedicated to fried seafood with a front-row seat to the frying action, available for set seatings Thursday through Saturday nights by emailing MDfrybar@thinkfoogroup.com up to 30 days in advance.

Here’s what we learned on our recent visit:

Start by asking, what would José do?

You might think round after round of fried foods would start to feel tiresome or heavy — but you’d be dead wrong. This is a José Andrés restaurant, after all, and this team takes R&D very seriously. So even though there’s an option to order à la carte, we suggest opting for what’s called “the Jose way” -- nine courses of fried dishes (with two non-fried courses thrown in for good measure). It’s a bargain at $50 per person, and you’ll be guided through a parade of golden-fried vegetables and sea creatures till you’re good and satisfied. It starts with spicy tuna tartare nestled on a fried shiso leaf and ends with a refreshing and simple dessert of grapefruit with honey, with so many tasty surprises in between. “It’s the only way to do it!” Andrés says. Also, it’s a bargain since all of these courses would add up to $90, not including the seaweed salad and dessert.

Spoiler alert -- Fried avocados are awesome, and so is fried uni:

One of the fun things about sitting at the bar right next to the fryer is watching the masters at work turning everything into crispy deliciousness. Even though you’ll probably note the avocado and sea urchin on the menu, it’s inevitable that someone will eventually say, “Is he frying avocado?!” It’s an idea whose time has come. Fried West Coast uni — aka, sea urchin — topped with lemon-soy air is also a revelation, retaining the uni’s depth and fresh brininess while taking diners into uncharted waters. To keep the delicate uni lobe intact, cooks balance the battered urchin on two chopsticks and gently lower it into the oil.

Put that sickly sweet plonk you tried in college out of your head forever and give Riesling another go! Not only because there are so many wonderfully complex versions available now, but also because it happens to pair perfectly with fried seafood. ThinkFoodGroup wine director and master sommelier Andy Myers says he chose this grape for its versatility with the Fry Bar pairings, complementing the sweetness of the fish and the earthiness of the vegetables. Plus, it works as a great palate cleanser. Three types of Riesling are poured as the meal progresses for $20 per person.

It’s tempting to call the batter tempura since many of the preparations and ingredients channel Japanese cuisine, but the kitchen staff noted that they specifically avoid calling the batter tempura, despite its likeness to the light and crispy Japanese-style batter. “We created the lightest, thinnest, most ethereal batter in order to highlight the ingredients and traditions of the Chesapeake Bay,” says Andrés. But like any good gambler, Andrés and his team aren’t revealing any of their trade secrets.

There was an oyster created just for MGM National Harbor:

That’s right — there’s a Lucky Shuck oyster sourced from St. Jerome Creek in Maryland, and this oyster is fried up and served here with tartar sauce and a lettuce cup. True Chesapeake Oyster Co. cultivates the bivalve in a section of the Chesapeake Bay that benefits from exposure to both northern freshwater and southern salt water. The oysters are also sustainably farmed, and each shell is returned to the bay to help create new oyster sanctuaries for healthy marine life.