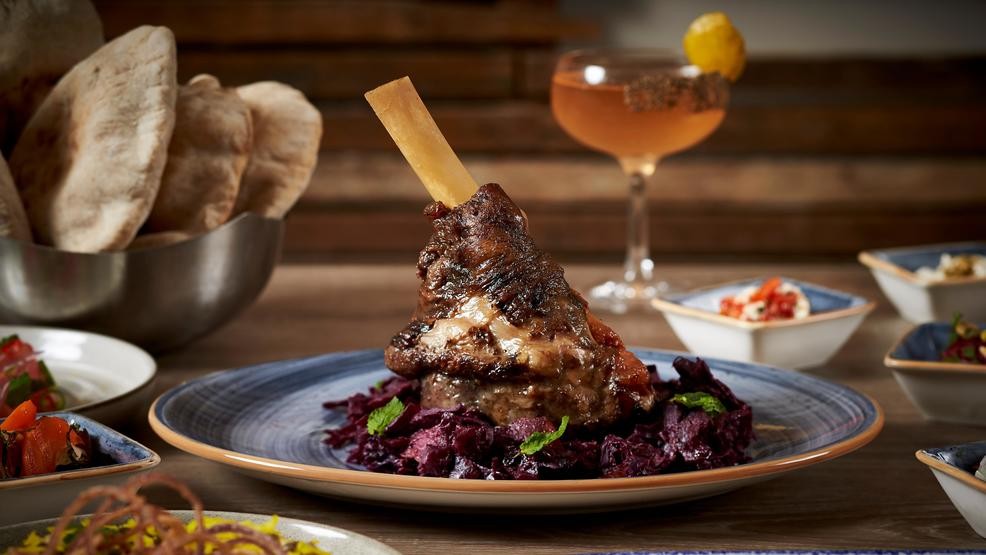 You can almost feel the sun on your face at a number of new eateries opening around town. That’s because chefs and restaurateurs are looking to the Mediterranean for inspiration. Menus are showcasing the influence Greece, Turkey, Israel and other countries in the region are having on chefs currently.

The restaurant formerly known as Nopa has been transformed. Executive chef Matt Kuhn is still in charge of the kitchen, but now his cuisine takes cues from Greece, Morocco, Tunisia, Spain and beyond. Everything is made to be shared. Start with spreads, like charred eggplant matbucha and roasted carrot hummus, before moving on to charcuterie and cheese. Then there are are flatbreads – the one with braised lamb and shakshuka sauce is especially beguiling – a rainbow of small plates, and a trio of large format entrees, including a chorizo crusted cod.

The creators of Shouk are popping up at Union Market with an Israeli street food stand. There’s falafel – of course – but the star of the show is a meatless shawarma made with grilled oyster mushrooms, along with tahini, pickled green cabbage, arugula, and cucumber and onion salad. Both are available as a bowl or sandwich. No matter which way you go, you can enjoy your meal with a limonana, traditional mint lemonade popular in Tel Aviv.

Must-order item: Meaty, but meatless, shawarma made with oyster mushrooms.

Must-order item: The puffy pita-style laffa bread is complimentary, but make sure to order some of the dips, such as whipped tahini, muhammara, beet top shug, and carrot haydari.

Sababa means cool in Hebrew and restaurateur Ashok Bajaj’s (Rasika, Bibiana, Olivia) new effort lives up to its name. There’s a small lounge at the front of the modern Israeli hot spot, where you’ll likely find yourself waiting if you don’t have a reservation. Fairy lights are strung over the 12-seat bar, which blends into the 90-person dining room decorated with carved wooden screens, palm fronds, lanterns, and white canvas draped from the ceiling. The kitchen is presided over by executive chef Ryan Moore, a veteran of Minibar, Rogue 24, and Bistro Provence. His menu begins with warm hummus with pita and salatim (dips, spreads, and pickled goodies) and moves on to small plates, larger propositions, and kebabs.

Must-order item: Lamb shank braised in schmaltz and served on shredded cabbage brightened with orange juice and sweetened with dates.

We always thought of hummus as an appetizer until we were won over by this charming fast casual spot’s bowls and pita sandwiches. Simply constructed, they’re full of flavor and super satiating. They are well complemented by the colorful salatim, like cukes amped by Fresno chilies and dill, and sunny turmeric pickles. Save room for soft serve. The vanilla tahini-chocolate Turkish coffee swirl is the perfect sweet finale.

Presented like a jewel box at the center of North Bethesda’s Pike & Rose complex, this chic glass-walled French-Mediterranean bistro comes courtesy of the Cava founders. Executive chef Sasha Felickson, a veteran of Doi Moi and Yona, serves up a selection of dishes inspired the Medi region, like pomegranate glazed lamb tagine and crispy trout packing some pep thanks to smoky-salty-sweet Turkish chili pepper. Other dishes are très Francoise, such as an exceptional, butter-rich foie gras torchon accompanied by smooth peach preserves; salmon topped Niçoise salad; and French onion soup (get it with the optional shaved truffles, you won’t be disappointed).

Must-order item: Shakshuka with crispy chickpeas and a poached egg.