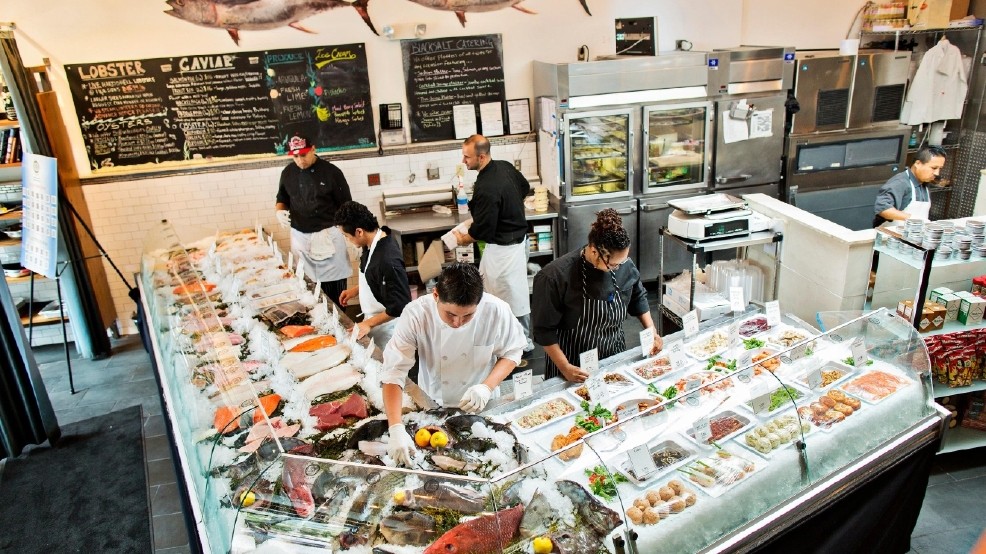 8 places to get your fish on this spring

Spring dining means more than peas, ramps and morels. The new season marks a departure from meaty stews that rounded our middles through winter hibernation and the arrival of warmer days spent soaking in the sun bare-shouldered enjoying fresh seafood. From new crudo and ceviche joints to places to enjoy the bounty of the Chesapeake, float these eight restaurants to the top of your list, because it's time to get your fish fix.

D.C.'s first dedicated crudo bar opened in April inside Alta Strada in City Vista. Enter the glam dining room called Conosci from Michael Schlow and get ready for a feast that barely requires a kitchen. The chefs slice rare fish sourced from True World Foods, a seafood company that taps Japan's fish markets, making the quality world class. The decadent preparations include albacore with tonnato sauce; hamachi with uni and caviar; and tuna poke with a paste of edamame and ramps, plus heat from Calabrian chilies. Choose between an a la carte menu or two prix fixe options. Conosci serves dinner Tues-Sat from 5-11 p.m.

Find Ivy City Smokehouse a stone's throw from Union Market and bookmark the address because you're about to be a repeat customer. The tavern that opened above the market this spring serves smoked seafood platters that the Lower East Side would be jealous of. That's because there's a good chance the smoked salmon you're enjoying was swimming just two days earlier. The fresh fish comes in daily to Profish and sees the smoker almost immediately, with no chemicals or preservatives to distort the flavor. A platter is big enough to share, but make sure you hoard the "Indian candy," for yourself. The tavern is open Tues-Thurs 11am-midnight; Fri-Sat 11am-1am; and Sunday 11am-10pm.

Northern Virginians who were beginning to suffer seafood separation anxiety knowing that Requin was just a pop-up can breathe easy. April saw the news that the restaurant, whose name means shark in French, will be staying put in Mosaic. That means diners can still look forward to Chef Jennifer Carroll's bountiful bouillabaisse, crave-worthy fritto misto, and smoked blue catfish rillettes, among other ocean dishes inspired by France and the Mediterranean. Don't worry District denizensThe Wharf development will still get its Requin in 2017.

Come May, Nats game goers will be able to pop into Whaley's for freshly shucked Virginia oysters on the river. The raw bar named after a Naval commander who died in the Chesapeake Bay battle is from the DGS Delicatessen team of Nick and David Wiseman. They'll focus on serving sustainable seafood in the form of shellfish towers, crudos, small plates and family-style entrées. Find it in the Lumber Shed building, where they'll be neighbors with Osteria Morini.

Fresh off a facelift, BlackSalt in the Palisades is looking fly so settle into the dining room for a refined seafood feast. Keep an eye out for soft shell crabs, which often crawl their way onto the specials menu come spring. Other highlights include Atlantic day boat scallops with potato gnocchi, pancetta, maitake mushrooms and fava bean pure?e; potato crusted halibut with spring asparagus and wild mushrooms; BlackSalt crab cakes with house bacon and fingerling potatoes; and shucked oysters from prime destinations. Don't forget to load up at the market for the next day. Fishmonger MJ Gimbar even stocks invasive species like snakehead fish so you can do the region a solid while frying up something delicious.

Ballston's Kapnos Taverna soups up its seafood towers with zingy flavors of Greece, making the splurge worth it. A three-tier tower ($135) comes with the usual suspects like a mix of East Coast and West Coast oysters, shrimp cocktail and king crab, plus some surprises like marinated octopus and king salmon tartar. Amplify each bite with five house made condiments including harissa hot sauce, tomato-ouzo cocktail sauce and lemon yogurt. Smaller groups can tackle a platter ($85). If you still have room, try a Maine lobster pyde or the charred octopus.

Union Market's oyster bar continues to be one of the best places in the city for a treat-yourself moment, as there's nothing that says, "I deserve this," more than a large Rappahannock sampler platter with Chesapeake Bay oysters and clams. A glass of accompanying rosé is compulsory, even if it's not 5 o'clock somewhere. Next time you pull up a bar stool, ask General Manager Jean Paul Sabatier about parent company, Rappahannock River Oysters' breaking news. They've brought bay scallops back to the Chesapeake after 83-years of extinction. The small but flavorful bivalves should be available to try at the oyster bar come October.

Espita is quick to tout its mezcals and moles, as are its fans. But, don't overlook the restaurant's five preparations of ceviche that practically beg to be eaten afuera in the patio dining area set to open in May. The hamachi is the most playful take because the yellowtail is adorned with pineapple, watermelon radish and sangria flavored granita that melts to form a tangy sauce. The sea scallop ceviche is another stunner thanks to its light and bright accompaniments: avocado salsa, pickled jalapeño, scallions and cilantro. Try them with a guajillo and mango mezcal highball.