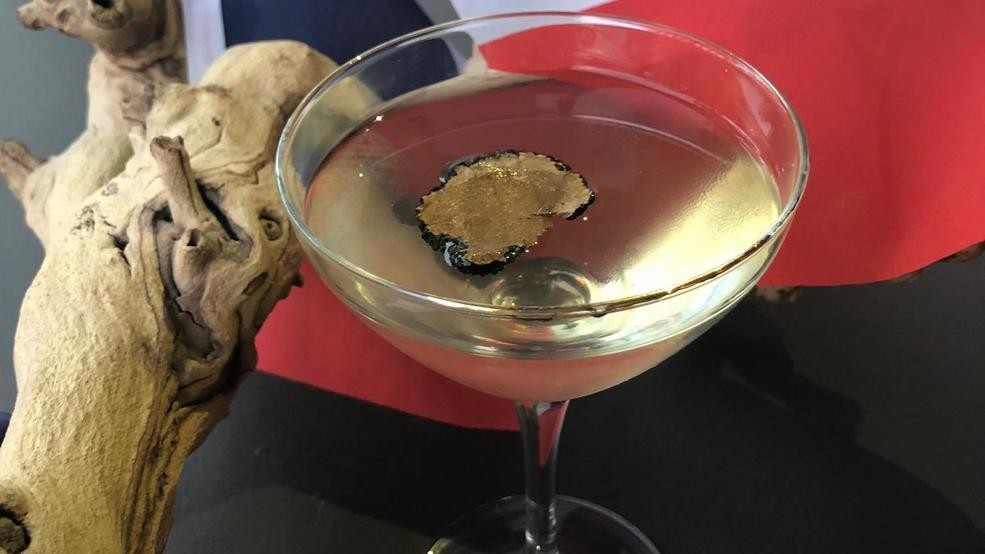 Earthy and funky, fresh white truffles are one of the most indulgent ingredients of the winter season. A few shavings of the expensive fungi pack a ton of flavor, enhancing dishes like pastas and omelets. And at Brabo Brasserie in Alexandria, white truffles add a luxurious twist to a classic cocktail.

Brabo's head bartender Brett Oye got the idea for the drink after chatting with a guest about incorporating culinary techniques and elements into cocktails – including those prized shaved truffles.

"When I put more thought into it I just had to have [white truffle] in a cocktail," Oye says.

He thumbed through his notes for some inspiration, finally settling on the gin-, and vodka-, and Lillet-based Vesper as his starting canvas. To make the truffle infusion, Oye cooked chopped truffles in a sauce pot with a few ounces of Chopin vodka. The amber-colored mixture was then added to the rest of the vodka and stored in an opaque bag to allow the infusion to complete.

Oye says he's been working with infusions for a while, though primarily with fruits and sweet ingredients. He worked with his sous chef – who is experienced infusing oils for the restaurant's tasting menu – to choose the best method for the truffle Vesper. In this case, he wanted to develop a drink that would highlight truffles in a more subtle way, rather than overwhelming the palate with what can be a pungent taste.

"The Vesper integrates the truffles as more of an aromatic element, with the infused vodka being an accent to the classic crisp flavors of gin and Lillet Blanc," he says.

The drink is finished with a fresh truffle garnish and works well alongside the brasserie's hearty winter menu (including several meaty steak frites preparation).

Oye says the cocktail drawing attention from restaurant guests. If there's one drawback, it's the price. The 3 ounce drink runs $30 a pop, thanks mostly to the rarity and quality of the truffle itself.

Still, he's pleased with the taste of this first iteration and plans to keep it on the menu for another few months, supply willing.

"Guests enjoyed the balance of a classic crisp Vesper with a velvety element that settles on the palate and complements the cuisine."

Brabo Brasserie is located at 1600 King St. in Alexandria. The Truffle Vesper cocktail is available for $30.