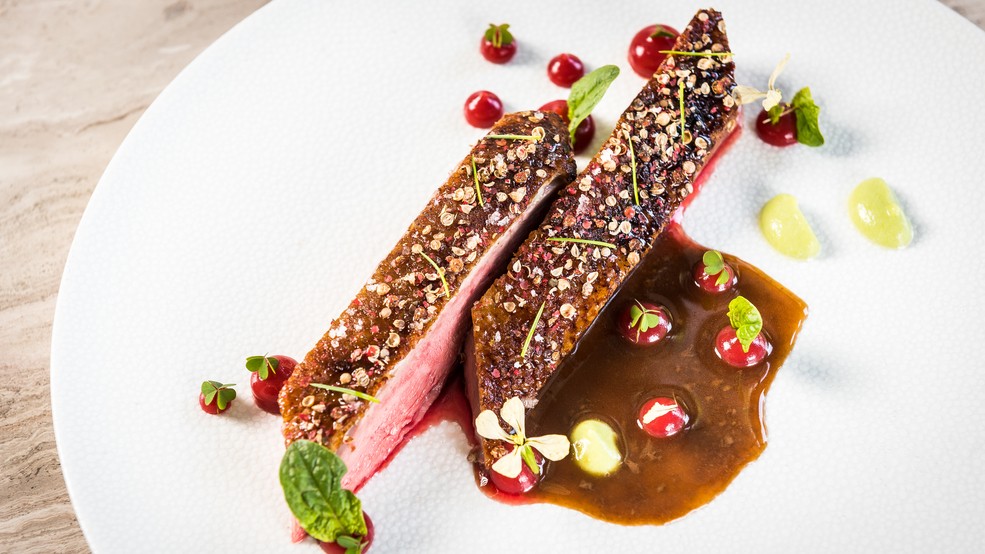 Bresca is bringing the French entrée pressed duck to D.C.

From the moment he opened Bresca, chef Ryan Ratino has not shied away from adventurous cooking. Whether he was serving up plates of linguine topped with rich, briny sea urchin tongues or foie gras cake pops, his cooking has known no borders. Partly because it was the first time in his career where he was calling the shots, rather than executing the vision of someone else or following in the much-lauded footsteps of a previous chef, and partly because he has an insatiable curiosity when it comes to cooking techniques and ingredients, Ratino has alway been determined to make Bresca an experimental kitchen.

Now, Ratino wants to bring one of the most classic French entrees to his dining room: whole roasted duck prepared in a traditional duck press. Starting June 13, D.C. diners will be able to try the French dish themselves, as Ratino will be offering four ducks a day prepared in the traditional duck press method ($125 each) and served tableside at Bresca. The ducks are first come, first served, and accompanied by side dishes such as charred wild onion, wild onion pistou and grilled and glazed rainier; you can add foie gras for an additional $40.

"I have great interest for old-school cooking tools and methods, and the duck press is something that I really wanted to bring to the restaurant," says Ratino.

The device, made of heavy metal such as brass, was invented by French chef Machenet in the early 19th century and was quickly adopted by chef Frèdèric of La Tour d' Argent who created his signature canard à la rouennaise dish using the device; the dish remains on La Tour d' Argent's menu today. Typically, a chef will season and roast the duck before placing the whole bird into the duck press. Once the crank is turned, the duck is compacted due to the pressure exerted by rotating the wheel. The resulting juices are collected in a pan and strained. The sauce will then be thickened and reduced until it turns a dark burgundy color, where it is then served atop slices of the duck breast. The best part, for the curious diner, is that the pressing of the duck and the cooking of the sauce are all done before your very eyes at the table.

Ratino, who was on DC Refined's inaugural 34 Under 34 list and was named the Rising Culinary Star of the Year at the 2017 RAMMY Awards, is actually self taught in the duck press method, and is now passing along the knowledge to his team. He will follow the traditional method, but of course he's putting his own whimsical spin on the dish.

Chef admits that "a great dish like this takes some time to prepare, but the experience that guests will take home will be worth it."

Check out the video above to see how the full duck press process!