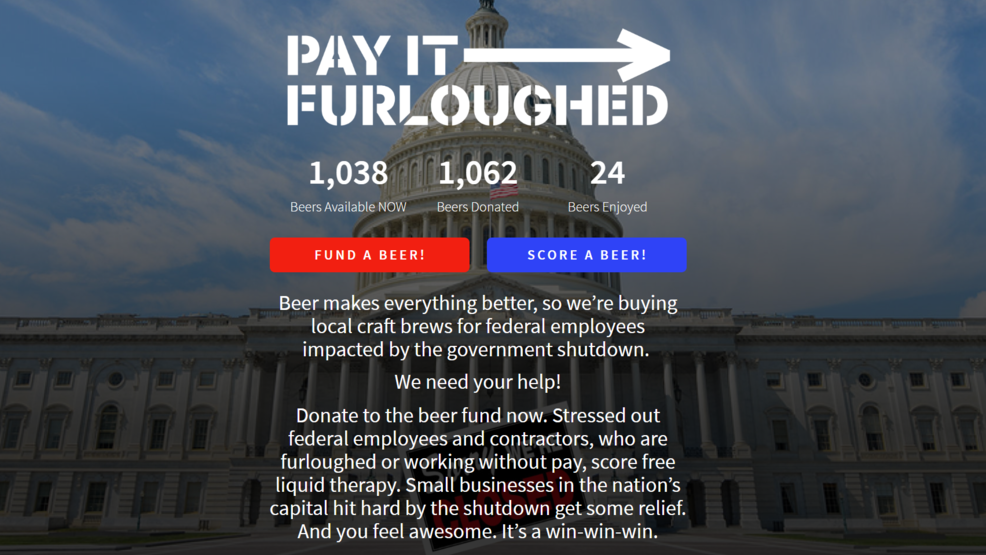 At the time of publication 1,122 beers have been donated and 29 beers have been enjoyed, leaving 1,093 beers up for grabs. (Screenshot from PayItFurloughed.com)
SEE MORE

How you can buy a beer for furloughed workers

Yesterday may have been the first official OPM snow closure of 2019, but for many federal workers in the DMV, it is far from the first day off. Today is day 25 of the longest government shutdown in U.S. history, with more than 800,000 federal workers on furlough. With no end to the shutdown in sight, and the first missed paycheck in the rear view mirror, we've seen many local restaurants stepping up and offering freebies and deals to affected workers; even our local celebrity chef, José Andrés, is opening a pop-up restaurant to feed unpaid federal workers.

But what if a regular Joe Schmo who hasn't missed a paycheck wants to help out his neighbor who is feeling the squeeze -- what are Joe Schmo's options? Enter food writer Nevin Martell* and his longtime friend, Al Goldberg, the founder of culinary incubator Mess Hall. The duo brainstormed a "pay it forward" approach and thought about what really brings people together: beer. Now, anyone that wants to help can donate to a beer fund on PayItFurloughed.com to be redeemed by federal employees and contractors, who show proof of employment.

"I've heard over and over again from friends outside of D.C. that they want to help furloughed workers hurt by the shutdown, but they feel powerless," said Martell. "I thought PayItFurloughed.com would be easy and fun way for people to share some good cheer with those who could use it most right now – one beer at a time."

Martell says Goldberg "immediately saw the value in the idea" and the two friends got to work finding help to turn the idea into reality. 3Advance managed to build out the site in 72 hours flat, and PR guru Erick Sanchez of Quixotic started getting the word out, including landing a story in USA Today.

Each beer is priced at $7.50, so if you'd like to add two beers to the fund, donate $15, a six-pack runs $45, 10 beers will cost $75 and so on and so forth. Martell and Goldberg got things started with a $1,000 donation (or 133 beers) to the fund. Free beers can be redeemed at Atlas Brew Works, DC Brau, 3 Stars Brewing and Shop Made in DC. Currently the deal only applies to beer, but the website mentions a goal of "partnering with several D.C. restaurants who are feeling the shutdown pinch and want to help keep federal employees fed." All of the funds donated go directly to the breweries/partners providing the beer, minus small fees for credit card transactions and website maintenance.

At the time of publication 1,122 beers have been donated and 29 beers have been enjoyed, leaving 1,093 beers up for grabs. When the shutdown ends, "federal employees/contractors will be able to continue tapping into the beer reserve for seven days after they receive their back paychecks."

UPDATE: Pay it Furloughed has now partnered with Pabst Blue Ribbon to officially make January 24 "Pay It Furloughed Day" with events being held across the nation. "Federal workers, government contractors, and everyday Americans alike can share beers in solidarity, while enjoying some camaraderie and community," says the website. If you're not in D.C., find an event in your area here.

*Editor's Note: Nevin Martell is a freelance writer for DC Refined, and many other local publications.