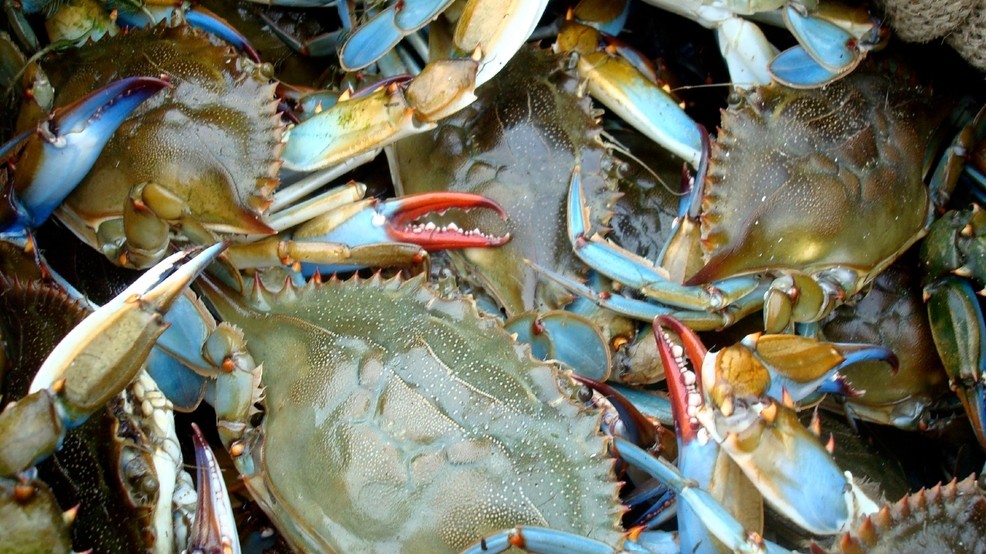 Blue crabs sit in a box after being harvested in the waters around Delacroix, La., April 30, 2010. (AP Photo/Vicki Smith)
SEE MORE

Male, female and juvenile populations all increased and now stand at an estimated total population of 594 million crabs, according to the survey.

“We are proud of our administration’s strong record of skilled environmental stewardship, which begins with safeguarding the Chesapeake Bay,” Hogan said. “Today’s results are further proof and a shining example that our efforts to protect Maryland's blue crab population, while ensuring the health of our state’s most important natural asset, have been successful.”

The rise in adult abundance of blue crabs was higher than anticipated given a poor influx of juveniles in 2017 and 2018.

“The female abundance of blue crabs is close to our target and the juvenile population is above average,” said Michael Luisi, the fisheries monitoring and assessment director for the Maryland Department of Natural Resources. “We expect a lot of variability in the blue crab population, and taking a conservative approach offers stability for the fisheries in the face of swings in abundance.”

According to the survey, it’s believed the increase in adult populations was a sign that blue crab management has been successful at allowing more crabs to reach the spawning stock. Mild winter temperatures also are said to have helped increase both juvenile and adult blue crab populations.

“The blue crab population is both healthy and thriving, which is great news for the entire Bay,” Maryland Department of Natural Resources secretary Jeannie Haddaway-Riccio said. “Under Governor Hogan’s leadership, these results are a clear indication of the effectiveness of our management plan for blue crabs, an iconic species that is essential to Maryland’s economy and the Bay’s ecosystem.”

The Chesapeake Bay Stock Assessment Committee will review the results of the survey and plan to release a full analysis this summer.

The Winter Dredge Survey has been conducted cooperatively by the Maryland Department of Natural Resources and the Virginia Institute of Marine Science since 1990 and the results are reviewed annually in an effort to have consistent management efforts across the jurisdictions. Throughout the survey, biologists use dredge equipment to capture, measure, record and release blue crabs at 1,500 sites throughout the Chesapeake Bay from December through March.