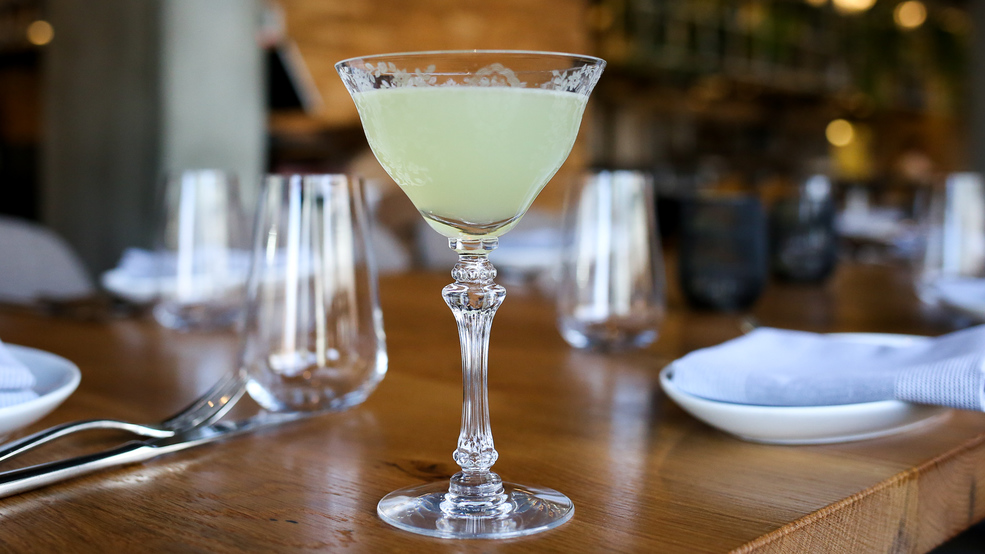 In most cases, drinks are used to complement and quench the fire from hot and spicy food– not ignite a new one. A new cocktail at Navy Yard's Chloe aims for a bit of both, balancing the adrenaline rush of heat with something that plays nicely with the kitchen.

The drink, named "Hello is the Final Word" ($13), was a bit of a departure for general manager Tyler Mitchell.

"I've never been a spicy cocktail person," he says.

This cocktail, however, traces its inspiration to the hottest pepper in the world: the Carolina Reaper. Mitchell experimented with the scorching chili when developing the drink, daring to infuse the pepper in some gin. After 15 minutes, he gave the mix a taste.

Realizing he didn't want to serve diners such a lip-searing beverage, he and his staff pivoted.

"We decided that habanero was actually a better chili," he says.

The lantern-shaped habanero still packs plenty of heat, though it's considerably more palatable than the Carolina Reaper. Mitchell also praises its "beautiful florality and fruitiness."

Chloe's riff on a spicy cocktail uses about three habaneros per liter of gin. The peppers are small diced and left to steep in the alcohol for 24 hours, which draws out the fruit and floral notes as well as the heat. Mitchell looked to the classic Last Word cocktail for the rest of his recipe. The classic drink uses Maraschino liqueur, with bitter and sweet notes that play off the peppery gin. It's all rounded out by Green Chartreuse and lime juice.

Despite having a bit of a kick, the "Hello is the Final Word" was built with Chloe's menu and chef Haidar Karoum's international cooking in mind. If the original goal was to wreck palates with one of the world's hottest peppers, the final outcome stays interesting, refreshing and food-friendly. That is to say, it won't be the last thing you're able to taste all night.

Mitchell says the drink pairs well across Chloe's international menu, including the fatty cobia crudo or duck paté or the fried whole fish. It also has a home year-round, from being a bright and refreshing spring sipper to a tingling winter warmer.

As with most things spicy, Mitchell says the cocktail has piqued the interest of many adventurous drinkers. Habaneros are fairly common, so people who are spice-sensitive know to stay away.

"But the people who are into it are really into it," he says. "We've had people come back for it."

Given that response, he doesn't see it coming off the menu anytime soon.