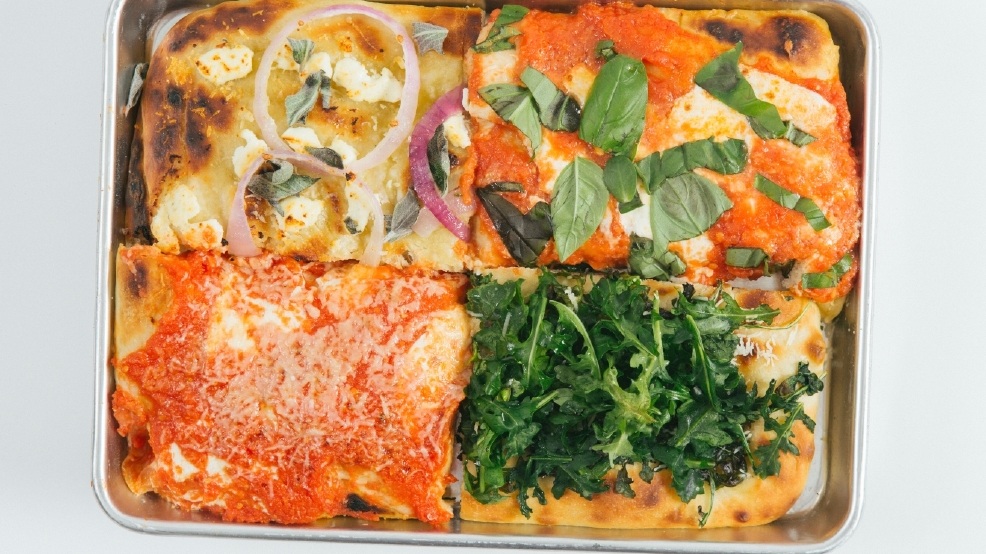 Another comes with pickled corn, sweet peppers, and scallions. A taco style round is speckled with cilantro and pickled jalapenos. “We tried to not limit ourselves,” says Bernstein, who found inspiration in Jim Lahey’s "My Pizza," "American Pie" by Peter Reinhart, and Nancy Silverton’s "The Mozza Cookbook." (Image: Tom Eberhardt-Smith )
SEE MORE

From flipping pizzas at home to raising mega cash on Kickstarter

Michael Bernstein loves pizza. Actually, he’s obsessive about it. The 36-year-old software engineer spent years teaching himself how to make dough -- vaguely inspired by both New York and Neapolitan traditions -- so he could enjoy za whenever he got the craving, which was frequently. He shared the recipe with his friend, Aaron Quint, another self-taught home cook who possessed a longstanding love of slices. The pair of aspiring pizzaiolos -- who had already been collaborating on a weekly podcast about food, music, and computers entitled “Beats, Rye & Types” -- kept tweaking the dough recipe until they perfected it. Two years ago, they decided to turn this journey into a cookbook to demystify the pizza-making process.

“There’s this idea you can’t make great pizza at home,” says Bernstein, who lives in Takoma Park, Maryland and counts 2 Amys as his favorite local pizzeria. “You need a fancy oven and imported Italian flour. You need this and you need that. And it’s not pizza unless it’s done this way. We really wanted to blow all of that away and make people feel like it’s approachable.”

After roping in their friend Steve Berry to do the design and layout, and photographer Tom Eberhardt-Smith, the duo decided they would fund their DIY cookbook concept with a Kickstarter campaign, which launched in mid-November 2015. Their goal: $28,000. “We didn’t know what to expect,” says Bernstein.

They were surprised and heartened when they reached a quarter of that goal in the first 24 hours. Bernstein acknowledges some of the out-of-the-gate success was due to creating a compelling video, vigorously promoting the campaign on social media, and early donations by friends and family. However, he thinks most of the interest in the cookbook was simply because, “People love pizza. I give all the credit to our success to the fact that it’s a magical food that has a special place in so many peoples’ hearts.”

Ultimately, the project raised $50,000 -- nearly twice the original ask -- from 1,105 backers. Approximately 800 people pitched in enough money to earn them a copy of what was simply titled, "The Pizza Book."

The book mostly eschews familiar favorites, though there are recipes for a margherita and “The best f***ing meatball.” Instead, it focuses on less obvious flavor combinations for the toppings, including one pizza inspired by an everything bagel featuring cream cheese, smoked salmon, chives, and capers. Another comes with pickled corn, sweet peppers, and scallions. A taco style round is speckled with cilantro and pickled jalapenos. “We tried to not limit ourselves,” says Bernstein, who found inspiration in Jim Lahey’s "My Pizza," "American Pie" by Peter Reinhart, and Nancy Silverton’s "The Mozza Cookbook."

Not all their experiments worked out. “Some ingredients are hard to put on a pizza well,” admits Bernstein. “We really wanted to have an eggplant pizza, but we couldn’t figure out a killer recipe.”

The book was sent out to backers of the Kickstarter campaign this summer. Currently, it’s only available online ($39 + shipping for the physical book; $24 for the e-book) through the authors’ website, though they are working to make it available through brick and mortar shops later this year.

Bernstein believes that the greatest benefit of this cookbook for readers isn’t necessarily the pizza they’ll make, but the emotions it will evoke. “There’s no feeling in the world like when you see your guests’ faces as they’re eating this pizza,” he says. “It’s amazing.”