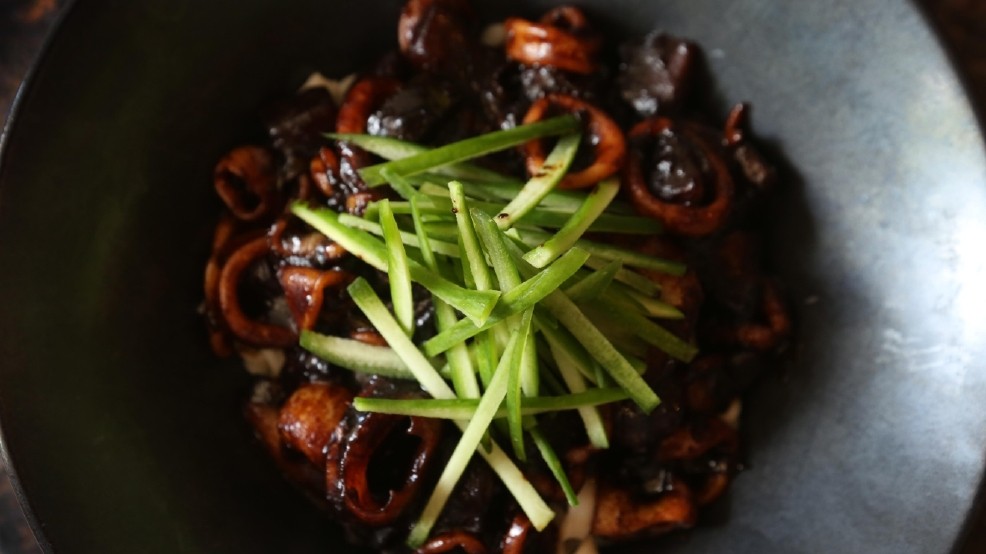 When Yesoon Lee and her son Danny Lee opened Mandu on 18th Street NW 10 years ago, their goal was to serve Korean food, but in a more familiar setting. Now, after Mandu has undergone a major menu overhaul, they've stopped playing it safe. Instead Chef Danny Lee and mother, "Mama Lee," have added dishes they eat at home. (Image: Amanda Andrade-Rhoades/DC Refined)
SEE MORE

When Yesoon Lee and her son Danny Lee opened Mandu on 18th Street NW 10 years ago, they faced both high expectations and naysayers. "People in the neighborhood were like, good luck, this spot has always failed," Danny says of the space that previously held a Himalayan restaurant called Mt. Everest. "People gave us literally a year."

Opening a Korean restaurant in D.C. proper instead of Northern Virginia was uncharted territory. "D.C. is where we lived, and we realized there wasn't good Korean, ANY Korean, in the city," Danny says. "But we wanted it done our way, not just an Annandale-style restaurant."

Their goal was to serve Korean food, but in a more familiar setting. "If you go to a typical Korean restaurant, they only know one way," Danny explains. "You're in a dingy atmosphere, with old Korean women who can't speak English, and a menu that's hard to read." However, customers were quick to compare the two and deem Mandu as Americanized, watered-down Korean food, according to Lee.

This was frustrating. "I have no problem with people saying we have a more approachable atmosphere and service, but how does that translate to the food?" Furthermore, he asks why cuisine is considered "Americanized" if Koreans don't physically serve it. "It's an uneducated, illogical, borderline racist way of viewing ethnic food," he says.

That being said, Mandu didn't come hot out of the gate in 2006 with exotic eats. The original menu was a folded, letter-sized piece of paper with comically huge font. It listed staples like pa jeon (savory, stuffed pancakes) and bibim bap (rice bowls), but also some safe choices. "Beef noodle soup, chicken noodle, vegetable noodle soup -- it was good, but it wasn't the most Korean thing ever," Danny says. "We didn't have duru jjigee (pork belly with rice cakes), dduk bok gi (rice cakes in gochujang with beef), nothing like that," Yesoon adds. "We couldn't start there."

After finding their footing six months in, the Lees ordered larger menu books and began to fill the pages with items they had been testing out on staff and running as specials, such as barbequed meat and rice cake-based dishes.

But it wasn't all smooth sailing, and there were moments where Danny felt overwhelmed. "We didn't need to hear criticism, we knew it wasn't good," he admits. He recalls a pun from one of the first online reviews: Mandu? More like Man-doo-doo. "We were a little hurt, but it made us try harder," Yesoon says. "If you get all the good criticism at the beginning you wouldn't be able to improve." They laugh about it today.

Flash forward to September 2015 when Mandu went through its biggest menu refresh. The change was more about staying relevant in a scene that gets a class of freshmen restaurants every season than about Korean food having breakout year. They drastically shortened the menu; time traveling back to when the restaurant first opened. The menu was a throwback in another way too. "Instead of doing what everyone is doing now -- modern this, molecular that -- let's go really home-style, almost like grandmother's cooking," Danny says.

That's why you'll find dishes like dak juk -- rice porridge similar to Chinese congee. To make the comforting home-cooked meal restaurant worthy, Mandu adds chicken stock and pulled chicken; roasts the raw rice grains with sesame; pre-seasons the dish with soy and sesame oil; and tops it with a picture-perfect poached egg and furikake garnish. "We've had guests here who have never had Korean food before eat that dish and they're like, 'I feel like I'm a kid, there's something nostalgic about that dish,'" Danny says. "That encapsulates what I want to do."

Another example of a tricked-out homey dish is the gaeran jjima silky, steamed egg custard served in a top-it-yourself style that makes for a dramatic presentation. "It's hilarious watching Korean people from Korea see it," Danny says. "There's a menu description and then it comes out and they're like, 'what the ****,' then they eat it."

Finally, the new Mandu menu taps into trending Chinese Korean cuisine that got started in parts of Korean densely populated by Chinese immigrants. "They would start cooking their own food and melding the two cultures together -- jajang is the main dish to come out of that," Danny says. Mandu serves the fermented black bean paste-based entrée with veggies over gleaming white, cut-to-order noodles. Diners can then add seafood or pork belly.

"We're never going to be happy with just one menu," Danny says. "We already make most things in house, but we're always looking to do more, that's why we started to make our own noodles."

So what's next for Danny and Yesoon? "We're going to keep doing what we're doing -- nothing matters to us but these two restaurants."