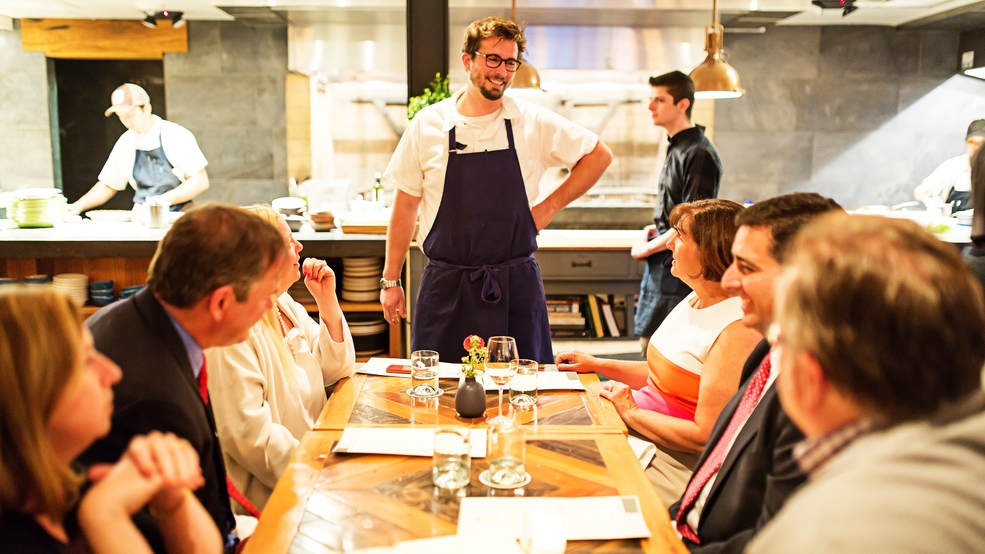 The Dabney chef Jeremiah Langhorne was the winner of the 2018 James Beard Award for Best Chef: Mid-Atlantic, competing against four other chefs including locals Amy Brandwein and Tom Cunanan. (Image: Courtesy The Dabney)
SEE MORE

From 22 semifinalists to four finalists to "and then there was one" we've been chronicling the 2018 James Beard Award season for you here on DC Refined. And the time has come to give a big CONGRATS to chef Jeremiah Langhorne of The Dabney on his Best Chef:Mid-Atlantic win! He received his award Monday night at the James Beard Foundation Awards at Lyric Opera of Chicago, emceed by The Chew co-host (and Howard University grad) Carla Hall.

This was Langhorne's first JBF nomination, though The Dabney was a semifinalist for the 2016 James Beard Foundation Award for Best New Restaurant. The win seemed to surprise Langhorne, but the award seems apt to us, as Langhorne attempts to source nearly all of his ingredients from the Mid-Atlantic region. His menus, which change nightly at the Michelin-starred restaurant, include items such as Cape May oysters, Maryland blue crab, fried Chesapeake sugar toads and grilled Seven Hills beef skewers.

José Andrés was also recognized with the Humanitarian of the Year award for his efforts in aiding Hurricane Maria survivors in Puerto Rico, where he served more than 3.3 million meals.

"José’s work in Puerto Rico and Haiti shows how chefs can use their expertise and unique skills to enact profound change on a global scale," said Mitchell Davis, executive vice president of the James Beard Foundation. "He has demonstrated how, at the most difficult times, hot-cooked meals provide more than nutrition, they provide dignity. And we couldn’t imagine a more fitting honoree this year as we celebrate how chefs and our industry Rise."

According to Washingtonian, his acceptance speech led to a standing ovation and a member of the crowd shouting "Jose 2020."

We would be remiss if we did not shout out our media colleagues who took home JBF Awards in April: WETA's Pati Jinich won for Outstanding Personality/Host on "Pati’s Mexican Table"; Maura Judkis from The Washington Post won in the humor category for "Pumpkin Spice Life"; and Helena Bottemiller Evich of Politico won in in food and health for "The Great Nutrient Collapse."