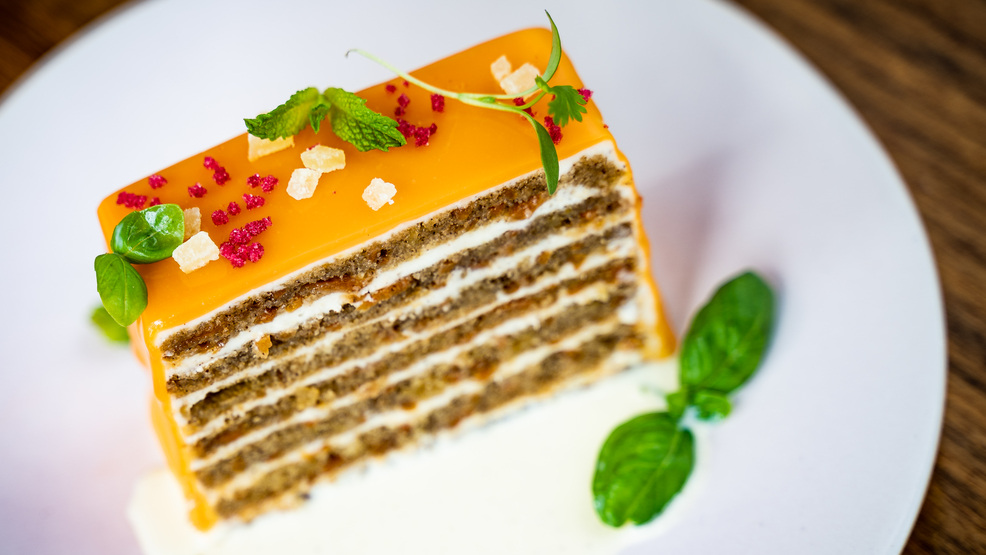 As the legend goes, well over a century ago, the wives of watermen on Smith Island in Chesapeake Bay sought to devise a dessert that would stay fresh when their husbands were out at sea. They ultimately created the isle’s namesake cake, which intersperses eight or more thin layers of yellow cake with fudgy chocolate icing. Now pastry chefs are putting their spins on the towering treat, which became Maryland’s official state dessert in 2008.

Many Marylanders consider this the OG. That’s because it’s crafted on Smith Island by homegrown bakers whose families have been making it for generations. There are a variety of flavors beyond the iconic iteration, including chocolate peanut butter, cooked coconut, strawberry cream, red velvet, and vanilla buttercream.

The team at Reese’s would love this cake. There’s the usual yellow cake and fudge icing, but then the bakers stud it with melted peanut butter cups. There’s no wrong way to eat a slice.

They take their Smith Island cake seriously here. Each kitchen manager gets to weigh in on what flavors will be offered. Options have included lemon cream, caramel cream, red velvet, chocolate peanut butter, strawberry cream, carrot, and cooked coconut.

You may want to share this whopping wedge. Standing 16 layers tall, it features alternating levels of yellow cake and chocolate fudge icing, and is accompanied by ice cream, whipped, cream, and berry compote. On second thought, we won’t judge if you eat it all by yourself.

A triangular tower of cake is an impressive 17 layers high. It’s made with the traditional combo of yellow cake and chocolate ganache. Every bite is a reminder why this dessert is a stone cold classic.

Take a picture before you take a bite. This Instagram-worthy iteration packs plenty of fudgy icing in between tender layers of cake. It arrives with a quenelle of chocolate ice cream and a dollop of crème fraiche.

Both the D.C. and the Bethesda location have a double chocolate Smith Island cake on offer. Get it solo or a la mode. Either way, you’re in for a treat.