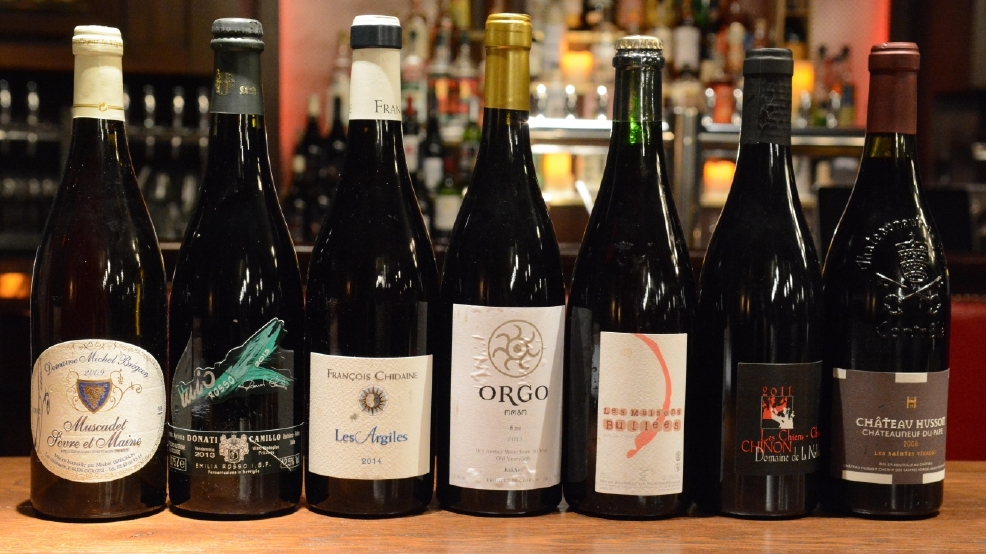 Love Beer? Then drink these wines

Brent Kroll has some choice words to describe the wine at The Sovereign. "In an endearing way, this is a Euro-trash list with rustic, hippy, dirty-in-a-sense wines that are great for beer drinkers," says the Neighborhood Restaurant Group (NRG) wine director.

Kroll was tasked with building a wine list for a restaurant and bar where Belgian beer is the star. But, unlike some beer bars offering only a handful of wines, Kroll's robust wine list at The Sovereign is 80 lines deep.

Like the beer list, the wine program was inspired by a research trip to Belgium led by NRG founder Michael Babin and Beer Director Greg Engert -- they forgot to stash Kroll in a suitcase. "They were drinking small farmer, country wines from France," Kroll says. "They came back wanting to focus on sustainable, organic, bio-dynamic wines." The result is a funky, French wine list full of natural wines from farmers who grow their own grapes.

Kroll says many guests switch to wine for their second drink, despite those rhyming urban myths from college about mixing alcohol. This provides an opportunity to think critically about which wines are best suited for beer lovers. We asked Kroll to play matchmaker by recommending wine for six types of beer fans.

"If people like hops, they might like pyrazines in wine," Kroll explains. These chemical compounds add a green component presenting as jalapeno, chives or raw bell pepper. They're most commonly found in Bordeaux varietals like Cabernet Franc, Cabernet Sauvignon, Merlot and Sauvignon Blanc. Kroll says wine drinkers either love or hate the herbaceous, bitter flavor profile.

Brettanomyces, nicknamed "brett," is a yeast brewers cultivate in beer to turn up the funk. "It smells like horse stables and tastes like vitamin C tablets, but it definitely adds an acidic component," Kroll explains. Sour fans will want to look to Burgundy, Rhone and the Loire Valley where brett is common. Certain lambruscos, also do the trick.

Wine aged in heavily charred, new oak barrels will give off the same notes porter drinkers dig such as coffee, chocolate and vanilla. "In beer they're front row center, but wine should be fruit-driven with these making cameos," Kroll says. He recommends a hot vintage Bordeaux or a meaty Châteauneuf-du-Pape.

Saison drinkers should be enthused about the rise of orange wine. These rustic wines, also known as amber wines, are mellow, slightly fragrant and floral with tea notes, much like a Saison. Orange wine gets its color from a combination of skin contact and oxidation. "It's white wine produced like red wine, stripping away all of the technology," Kroll explains.

For those who like a crisp, clean Pilsner, Kroll says to seek wines with less complexity. "You don't want too many strong flavors, so you should shoot for a clean Chablis, Sauvignon Blanc or Muscadet."

People who like fruity lambics like Lindemans' Framboise should try a pét-nat. Short for pétillant-naturel, these wines are capped before fermentation is finished trapping natural carbonation. The result is an off-dry wine with a slight spritz best sipped as an aperitif. "They've become a fadI just look at it as simple farmer juice, Kroll says.

Given cider's trendy status, Kroll pointed out two varietals that might be appealingChenin Blanc and Pinot Blanc. "Chenin Blanc has this real apple cider, crab apple note so I can easily get a cider drinker into that."