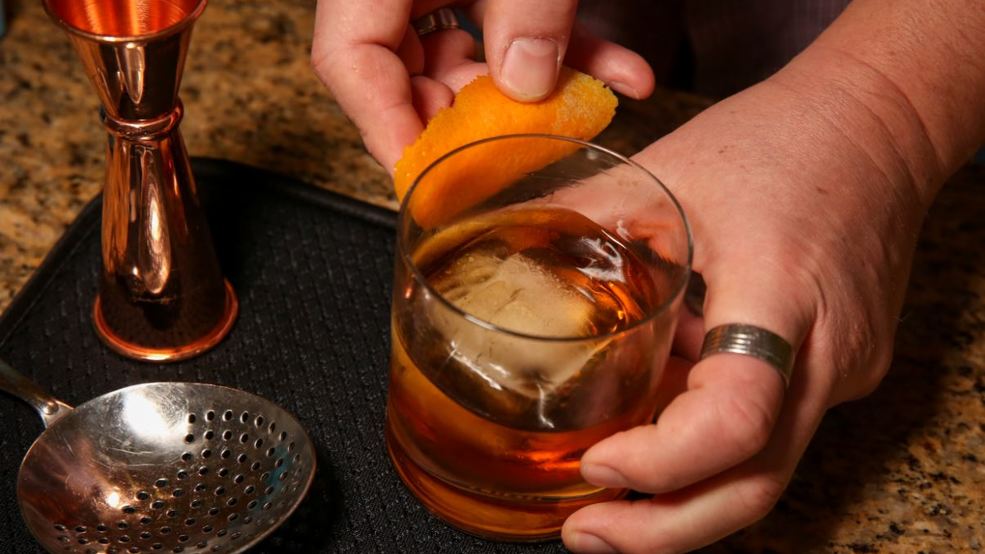 In just six years, we’ve got five whiskey makers, one rum distillery (with another one on the way), a cidery and more liqueurs than a city of our size should rightly demand. We realized an enterprising home bartender could mix up all kinds of classic cocktails using nothing but District-bred booze. (Image: Amanda Andrade-Rhoades)
SEE MORE

Make classic cocktails at home using nothing but D.C.-bred spirits

When New Columbia Distillers bottled its first ever batch of Green Hat Gin in 2012, no one could have imagined the lofty heights the D.C. booze scene would soon reach. In just six years, we’ve got five whiskey makers, one rum distillery (with another one on the way), a cidery and more liqueurs than a city of our size should rightly demand. We realized an enterprising home bartender could mix up all kinds of classic cocktails (and countless newer ones) using nothing but District-bred booze.

Now, we can only go so far --it’s going to be a while before we see a District tequila (probably when global warming lets us grow agave in Rock Creek Park), so margaritas are out. But vermouth, amaro and even some obscure liqueurs are now all in play.

So let’s start mixing up some D.C. drinks!

Manhattan
It doesn’t get much more foundational than the manhattan. The biggest question you’ll face is rye or bourbon, so let’s split the difference by using a bourbon with some rye-like spice.

Stir over ice. Strain into a cocktail glass. Garnish with brandied cherry or citrus peel if desired.

Negroni
The lineup of Italian liqueurs at Don Ciccio & FIgli opens the door to all manner of bitter drinks, like this one, the standard by which all Italian cocktails are measured.

Stir over ice. Strain and serve over a large ice cube and a garnish of orange peel.

New York Sour
True, no one is growing wine grapes within the city limits, but at least someone is now making wine from grapes they truck in from elsewhere. Which leads us to this whiskey sour with a floater of bold red wine. Yes, we should probably call this one a D.C. Sour, but so be it.

Shake bourbon, lemon juice and syrup. Strain into rocks glass filled with fresh ice. Pour red wine over the back of a spoon onto drink’s surface. Garnish with brandied cherry if desired.

Stone Fence
This one dates back to the Colonial era. You could use regular apple cider, but since we now have our own urban cidery, hard cider is the play.

Add whiskey and bitters to tall glass filled with ice. Top with cider and stir. Garnish with mint if desired.

Bees Knees
Another sour variation, this one exchanges honey for the sugar. Local honey, of course.

Espresso Martini
Invented in London in the 1980s, we’ll make this one with D.C. coffee—and D.C. coffee liqueur.

Shake well over ice and strain into a cocktail glass. Garnish with three coffee beans.

Stir well and strain into a cocktail glass. Garnish with an olive. Or a pickle spear.

Lion's Tale
Think of this as a tiki-fied whiskey sour—and the perfect excuse to use Cotton & Reed’s rum-based Allspice Dram. And we’ll pair it with Rock Creek Whiskey, the first bourbon made entirely in D.C. since Prohibition.

Shake well and strain into a cocktail glass.

Paper Plane
Hailing from Little Branch in Manhattan, this four-ingredient, equal-parts drink is one of many variations on the classic Last Word cocktail. It’s another that really lets the bitter liqueurs from Don Ciccio shine.

Shake well over ice and strain into a cocktail glass.