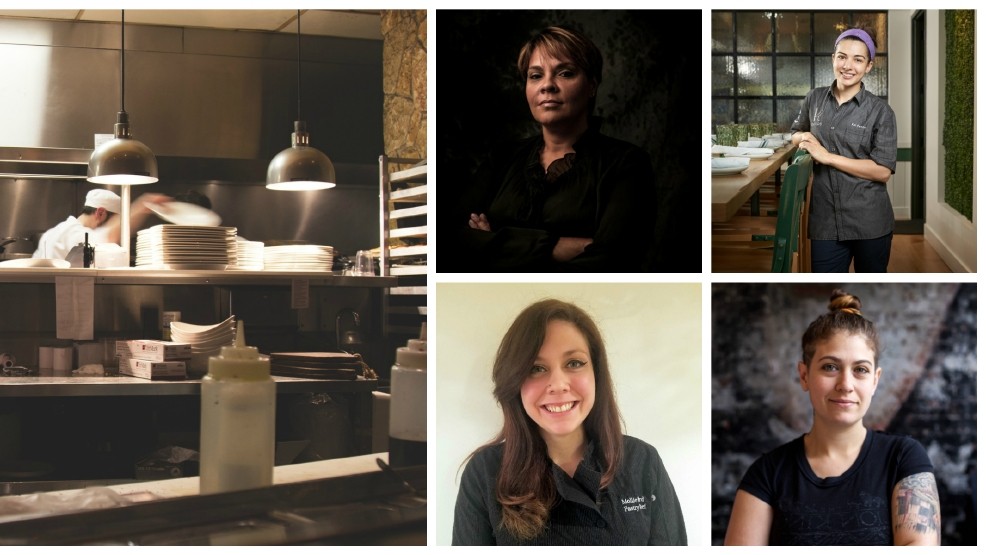 Let’s give it up for the women of the D.C. restaurant scene. Here are four bada$$ lady chefs who are killing it right now. (Images: Courtesy each restaurant respectively)
SEE MORE

Let’s give it up for the women of the D.C. restaurant scene. Here are four badass lady chefs who are killing it right now.

Backstory: Though she always had a passion for cooking and took culinary classes at Stratford University’s Tysons Corner campus, her first jobs were at the Sustainable Buildings Industry Council and the World Bank. However, a cancer diagnosis made her rethink her career choice. Determined to do something she loved, she quit her job to found DC Empanadas food truck in 2008. The highly successful startup eventually spawned a catering company and a stall at Union Market, and gave Bran-Leis the ability to open Taqueria del Barrio in Petworth this spring.

Culinary philosophy: “My food is wholesome, honest, and good. It’s what I want to feed my family, so I want guests to feel like they’re at my house.”

Pet peeve in the kitchen: “Because the way things are with the restaurant job market in D.C., a good line cook can get a new job every day of the week. Someone recently called me at 5 p.m. to inform me they were moving jobs and wouldn’t be coming to work. You never know who will be there and who won’t. I have an issue with people who don’t take their job as seriously as I take my job.”

Signature dish: “Our chicken enchiladas are everything I love about Mexican food. They’re rustic, traditional, and delicious.”

Favorite badass lady chef: “My best friend and mentor Jamie Leeds [of Hank’s Oyster Bar, Hank’s Pasta Bar, and Hank’s Cocktail Bar]. She’s like family and one of the most amazing woman entrepreneurs I know, so she’s my go-to for business advice. I aspire to be her one day.”

What’s next: Another Taqueria del Barrio, ideally in Virginia.

Backstory: Growing up on her family’s farm in Prince Georges County, she has been a pastry pro from a young age – from helping her grandmother make ice cream to assisting an uncle who specialized in doughnuts. She attended the Restaurant School at Walnut Hill College in Philadelphia, where she stayed after graduation to work at Jose Garces’ Distrito. After moving to D.C., she worked at Sticky Fingers, Poste, the Source, and Marcel’s.

Culinary philosophy: “Have fun. [Chef-owner] Tim [Ma] gives me so much freedom to make things colorful and playful. You’re seeing my crazies come out at Kyirisan, because I’m getting to do everything I’ve ever wanted to do.”

Pet peeve in the kitchen: “Guys who are trying to hit on you, though it doesn’t happen at Kyirisan. That’s the worst. It’s annoying. I’ve got work to do. Get out of here.”

Signature dish: The Bees Knees with a honey nougat bee, white chocolate, mochi, and lemon chiffon cake covered in toasted meringue to look like a beehive.

Favorite badass lady chef: “[James Beard Award winning pastry chef] Sherry Yard, hands down. I’ve only met her five times, but she’s made a huge impact. She walks into the kitchen dressed head-to-toe in pink and has blonde hair, but she commands like no other. She’s a boss. I want to be terrifyingly cute like her when I grow up.”

What’s next: She’s getting married in November, so she’s in the midst of coordinating the event. To spare herself the labor of making her own wedding cake, she has enlisted a group of friends to bring a series of cakes.

Backstory: Her mother owned a Filipino bakery and catering company in Gaithersburg, Maryland, so she worked there growing up. When she was a junior in high school, she helped cook a family feast for her grandmother, who declared the food was like art. It was then she knew she wanted to be a chef, so she attended the Culinary Institute of America in Hyde Park, New York. After graduating, she got a job at the Brant Point Grill on Nantucket. Her first D.C. job was at Graffiato working under Marjorie Meek-Bradley. She continued to work for Mike Isabella Concepts with positions at Kapnos, Kapnos Taverna, and Pepita, before being named the chef de cuisine at Kapnos Kouzina.

Culinary philosophy: “Food tastes better when you put love into it.”

Pet peeve in the kitchen: “Banging pans and closing the oven door hard drives me crazy.”

Favorite badass lady chef: “Marjorie Meek-Bradley taught me everything I know, including that I don’t have to be a super serious crazy person like you see female chefs being portrayed on Top Chef.”

What’s next: Her dream is to open a mom ‘n’ pop style shop focusing on Filipino cuisine, potentially in Florida.

Backstory: Attended what is now called the International Culinary Center in New York City. From there, she worked at the Breslin and John Dory Oyster Bar in Manhattan, the Whelk in Westport Connecticut, and the now-shuttered Jackie’s in Silver Spring, Maryland.

Culinary philosophy: “We are fortunate to have access some of the best produce the mid-Atlantic has to offer, so I try to present the food as honestly as I can. I want the ingredients to speak for themselves. There aren’t a lot of smoke and mirrors.”

Pet peeve in the kitchen: “When people don’t taste the food constantly before it hits the plate. I’m all about tasting everything all the time.”

Favorite badass lady chef: “Executive chef Marcelle Afram from Bluejacket. It’s tough to be a woman in this industry, so having someone who can understand what you’re going through is super important. She runs a really tight ship and gets the results she wants. That’s a hard thing to accomplish in a kitchen as a woman, because it’s a very masculine world.”

What’s next: She’s nominated for a Rising Culinary Star of the Year RAMMY Award; the ceremony is on July 30.