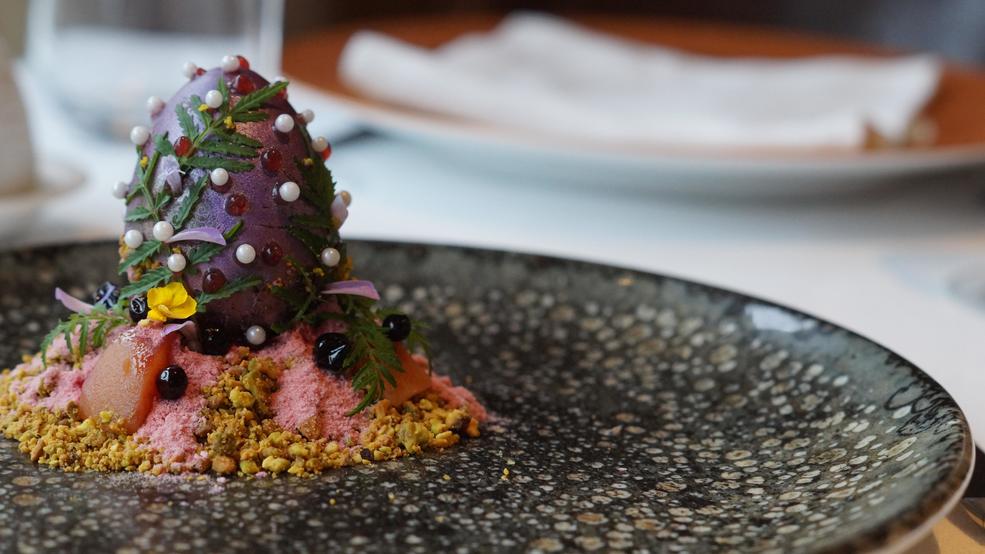 Often, fine dining food can seem almost too precious to eat. But Mirabelle's meticulous edible Fabergé-inspired egg was meant to be demolished – and enjoyed.

"That's part of the fun of it," says executive chef Keith Bombaugh, describing the dish of dark chocolate, foie gras and duck confit.

Inspiration struck when he came across a photo of the jewel-covered Lilies of the Valley Faberge egg, a luxury piece of art crafted in Russia back in 1898.

"Not only is it just beautiful to look at, but it really has a sense of life to it, and it just really moved me," says Bombaugh, who took over the kitchen at the refined French restaurant last summer.

Bombaugh, along with other members of the kitchen and staff, began playing with different ways to stuff food into an edible eggshell. The winning formula was tempered 64 percent cocoa dark chocolate with a deep purple coloring. He estimates it took about three weeks to get the right consistency for each component.

The stuffed egg is served atop a bed of toasted pistachio powder, an egg-less sour cherry meringue, poached quince and candied huckleberries. It's decorated with dots of sour cherry puree, sugar pearls and set on a bed of greens and herbs from Impact Farms in Virginia. There's also a side of grilled sourdough bread (brioche was nixed for being too rich and buttery to balance), and that's where the fun starts.

Guests at Mirabelle are instructed to crack the egg and mix it around with all the garnish, much like they would with a steak tartare.

The egg teeters between sweet and savory notes and is offered as a second course, either as part of the tasting or à la carte menu ($27). It's easily enough to share, especially given its richness.

The dish is certainly playful, making for great conversation piece on any date. Still, Bombaugh says it's not over the top enough to steer away business or more formal diners, either.

"At its core, it's literally just a foie gras parfait on toast," he says.

Mirabelle expects the current iteration of the Fabergé egg to stay on the menu until at least spring. At that point, Bombaugh says he may switch out some different produce and components as the seasons change. Whatever is on the plate though, he hopes it still continues to spark wonder among guests.

"When they get it, they're blown away by it," he says. "Everyone who's tried it has been fascinated by it."