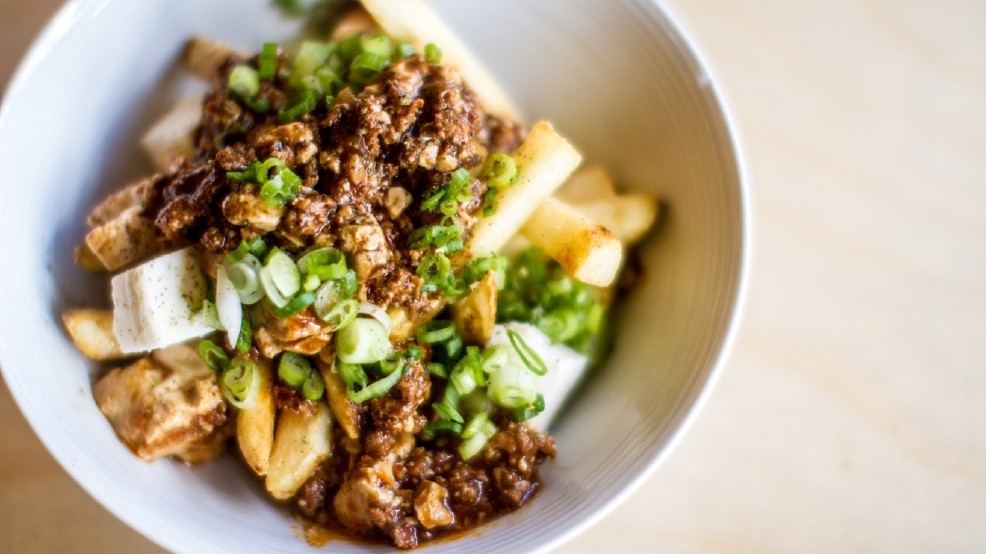 His version riffs on a Chinese food favorite, which is also popular in Japan: mapo tofu. He makes a fragrant ground chicken sauce enriched with star anise, garlic, ginger, and chilies. It’s ladled over cubes of tofu and mozzarella curds. The appetizer is finished with scallion rounds and ground Szechuan peppercorns for a hit of heat.(Image: Courtesy Haikan)
SEE MORE

Poutine on the Ritz: Where to get the Quebecois comfort food done right

This is not routine poutine. Chefs are taking the Quebec comfort food classic to heart clogging new heights. Hit up these five kitchens who are dishing out can't-miss poutine the next time a craving hits.

Executive chef Travis Weiss wanted to do poutine differently. “Fat boy style,” as he puts it. Instead of fries, he uses savory funnel cake seasoned with mustard, thyme, parsley, chives, and beer. The deep fried squiggles are topped with shredded duck confit in bacon fat, white cheddar curds, and duck fat enriched brown gravy, along with arugula and pickled onions to (kinda) cut through the richness. “I’ve gotten some angry comments from traditionalists, who don’t believe it’s poutine because there are no French fries,” admits Weiss. The fans outweigh the haters though – the decadent dish is a top seller.

Why would executive chef Katsuya Fukushima put poutine on the menu at a ramen restaurant? “Everyone loves French fries,” he reasons. “If you love fries, you’ll love poutine, because who doesn’t love cheese and gravy?” His version riffs on a Chinese food favorite, which is also popular in Japan: mapo tofu. He makes a fragrant ground chicken sauce enriched with star anise, garlic, ginger, and chilies. It’s ladled over cubes of tofu and mozzarella curds. The appetizer is finished with scallion rounds and ground Szechuan peppercorns for a hit of heat.

Owner Eric Gordon had been working as a chef for a long time, including positions at New York City’s Bond Street and Grace in Los Angeles. During a stint as a corporate chef for Thompson Hotels, he spent time in Toronto, where he fell in love with the city’s poutineries. When he decided to spend more with his family, he stopped working in restaurants and rolled out the Urban Poutine food truck. The mobile eatery features seven variations on the Canadian icon. His best seller is topped with braised short ribs, gravy, curds from the Crave Brothers in Wisconsin, and chopped chives.

The team at this Jewish delicatessen puts a unique spin on poutine. Instead of using French fries, they feature thyme-spiced potato latkes. Crumbled farmer’s cheese, scallions, a generous splash of sweet onion gravy, and freshly cracked black peppercorns complete the happy hour favorite. “It’s comfort food to the core,” says founder Nick Wiseman. The dish is available at both the Dupont Circle and the Fairfax, Virginia locations of the restaurant.

“Sometimes it’s more avant-garde to do a dish the way it was meant to be, rather than mixing it up,” says Alex McCoy, the consulting chef who designed the menu at this Bloomingdale temple of fried goodness. His loving rendition begins with double fried Russet potato fries, which are dumped over cheddar cheese curds to warm them slightly. Then he adds on confit duck, fresh chives, and gravy accented with thyme, star anise, juniper berry, and cinnamon. Diners can stray from tradition by adding a sunny side up egg, which we can’t recommend enough.