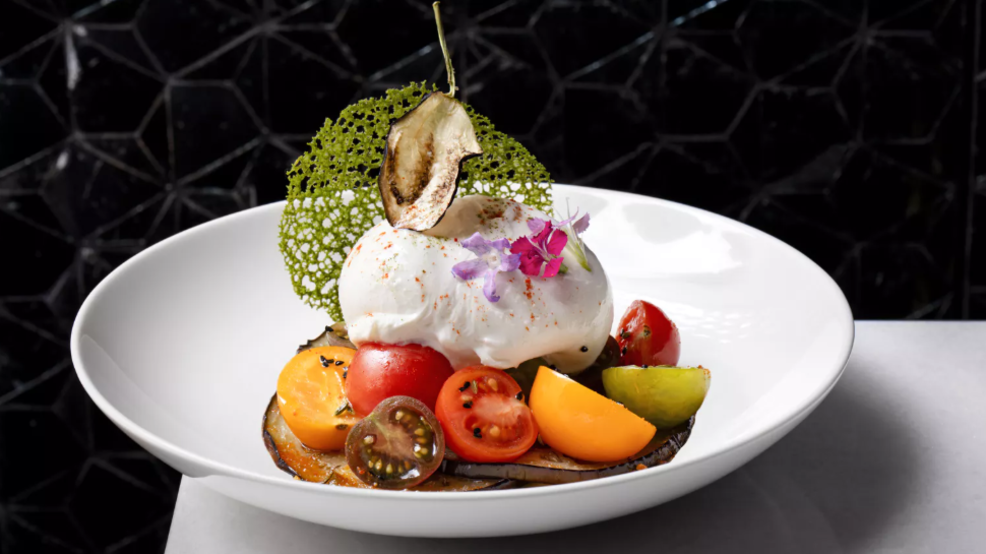 Behind the menu: Creativity shapes Indian classics at Punjab Grill

Walk into the new Punjab Grill in Penn Quarter and you’ll instantly be wowed by the décor: marble table tops, the faceted ceiling, a solid brass bar with mother of pearl inlay work, and, the piece de resistance, the “sheesh mahal” (palace of mirrors) private dining room with over 100,000 mirrors studding the walls. No detail has been spared.

More than any area though, this attention to detail has not been spared in the food.

“I want to challenge the perception of Indian food and elevate it to true fine dining status," said owner Karan Singh.

To that end, Punjab Grill stays true to traditional Indian flavors and techniques, but with a creative twist and a little bit of fun.

Start with the small plates section, where you will find global flair in traditional flavors. “Punjab takes on the world” is how the owner describes it. The Gol Gappas are a typical Indian street food, and Punjab Grill’s version provides the authentic flavors of tart, sweet and spicy, but with a modern element: passion fruit water spheres.

The Burrata Badal Jaam is a fantastic example of the thought process and the story behind the food. While burrata is most definitely not Indian, there is a strong dairy culture in the Punjab region. Punjabi farmers have been a strong presence in the Italian cheese industry since the 1980s, working on mozzarella and Parmesan cheese farms. Additionally, tomatoes and eggplant are favorites in both Punjab and in Italy. While a traditional “badal jaam” will usually have garlicky yogurt for the creaminess, Punjab Grill’s version uses the burrata as a nod to these connections between Punjab and Italy. This melding of flavors is not just for the sake of it though -- it really works, but it works even better when you understand the story behind it.

Another fun twist is the chicken “red curry." Butter chicken is a Punjabi icon, but Chef Jaspratap Bindra wanted to add in a personal touch given his love of Asian flavors, and the similarity in consistency and characteristics between the curries from India and Thailand. The chicken and the curry is made in a traditional Punjabi manner, but infused with Thai flavors for a surprisingly wonderful combination of both tastes in each bite.

Cocktails are just as one-of-a-kind too, with a unique Indian touch. The Kasauli 1820, a version of the Old Fashioned, is a nod to India’s first distillery set up in 1820 in the small mountain town of Kasauli. Punjab is also known as the “land of the five waters," recognizing the five major rivers that flow through the region. This aptly named cocktail is a punch that comes from the word for five (paanch) and features calvados, prosecco and garam masala.

The “Signatures and Classics” section of the menu is just that: typical (but not standard) dishes found in Punjabi households as a reminder of home. Ask any Punjabi and the “sarson ka saag” will be a fond memory. At Punjab Grill, Chef Bindra uses his mother’s recipe for both the greens as well as the cornflour bases rotis, adding some radish water to keep the rotis more moist. The “chole masala with kulcha” is another dish where every house will have a version of the chickpea curry served with Indian bread. Both these are must gets at Punjab Grill.

To really get the royal experience, find a group to join you on an exploration of the “Maharajah menu." What you will find here is like nothing you’ve had before. Patiala duck is the Punjabi version of the Peking duck, served with rumali rotis (thin Indian rotis – rumali means handkerchief), plum chutney, pickled onions, cucumbers and carrots. Petrossian caviar is served in mini naan blinis along with house white butter and a lemon foam. These large format dishes will instantly make you feel like an Indian queen or king.

Whether you go in for a couple of small plates and drinks, a leisurely dinner, or a full luxury experience, Punjab Grill truly puts together a delectable feast with a story behind every plate.