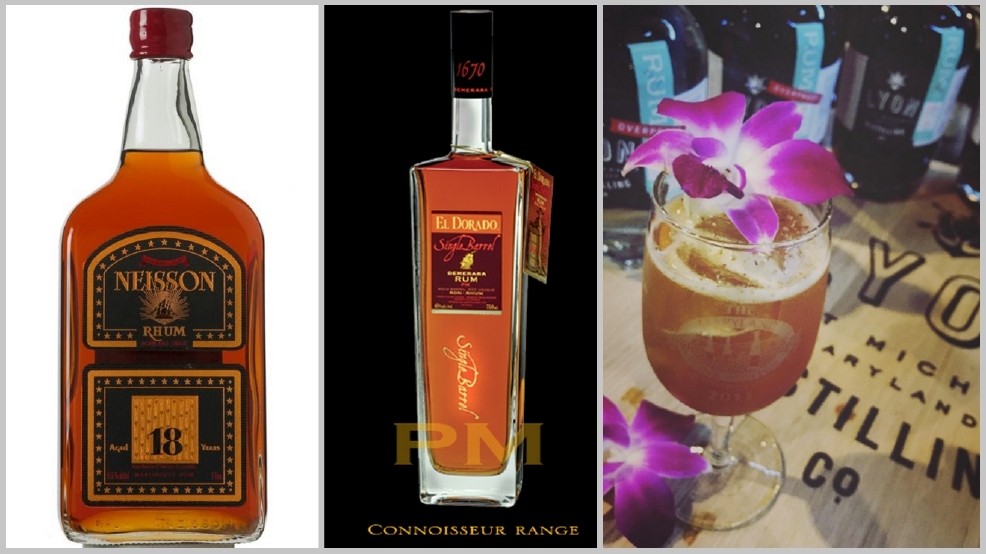 As more quality rums hit the market, both from domestic craft producers, and traditional producers on the islands, more drinkers are realizing you don’t have to mix many of them with fruit juice to make them palatable. (Courtesy images)
SEE MORE

Rum is having a moment. It should be your moment too

As one of the bartenders who helped put DC drinking on the map, Todd Thrasher has tasted just about every kind of spirit there is. And when it came time for him to embark on opening his own distillery -- which he’ll do next fall at the Southwest Waterfront -- he had the entire universe of spirits to choose from.

He chose to focus on rum. Why?

For one, he looked at the craft distilling boom, and thought, “How many more American whiskies and American gins can you have? Rum is kind of the next big thing.”

But more importantly, he said, “It’s what I drink. I’m a scuba diver and I like going to the islands.”

Not bad for a spirit that starts from nothing more than water, yeast, and sugar. That sugar usually comes in the form of molasses (Thrasher plans to use all Grade A molasses) but sometimes as pressed cane juice.

Ben Lyon, the founder of Lyon Distilling on the Eastern Shore, split the difference. He makes all four of his rums with a hybrid of molasses and cane sugar.

Like Thrasher, he had a connection to the sea, as a longtime sailor, and thus an affinity towards rum. But since opening four years ago, interest in rum—as well as sales—have exploded. Jaime Windon, Lyon’s co-proprietor, said the “resurgence of tiki culture is doing more favors for the rum industry than anything.” But, she’s quick to add, “If you have a good rum, you don’t have to do much to it.”

And as more quality rums hit the market, both from domestic craft producers, and traditional producers on the islands, more drinkers are realizing you don’t have to mix many of them with fruit juice to make them palatable. “Rum is so open to interpretation; it’s so varied,” says Windon.

While she and other rum domestic producers are determining—and debating—whether there’s a defined American style of rum, existing styles developed during colonial times. In a very general sense, Spanish colonies made light, delicate rums. English rums tended to be bold and funky. French territories specialized in grassy, floral “rhum agricole,” made from pressed sugarcane.

“There’s always a hint of sweetness that most whiskies have,” he says. “That’s the first correlation between the two. They are both assertive, masculine, and get the job done.”

Indeed, taste many a rum blind, and you might mistake it for another liquor. Santa Teresa 1796, from Narvaez’s home country of Venezuela, drinks like cognac, with tobacco, fruit and leather flavors predominant.

Plume at the Jefferson Hotel has some of the most unique (and exclusive) rums in the city; their focus is on spirits from the French Antilles, which did a robust rum trade during Thomas Jefferson’s time. There, you can taste an 18-year-old Neisson from Martinique. Peaty and grassy, it’s reminiscent of Irish whiskey. Or an El Dorado single barrel from Guyana, made in the only wooden pot still operating in the world today, which gives you some classic rum funkiness, with some vegetal and cedar character.

“All taste very definitively of where they’re from, but also in how they’re made,” says Jennifer Knowles, Plume’s wine director.

Better yet, she says, rum a great opportunity to tell stories, being that it’s history figures into tales of imperialism, slavery, war and the spice trades.

It’s a sentiment that Narvaez echoes. “Rum is a classic spirit,” he says. “We think it’s the next big thing, but go back in history; it’s always been there. The Founding Fathers probably toasted more with rum than anything else.”