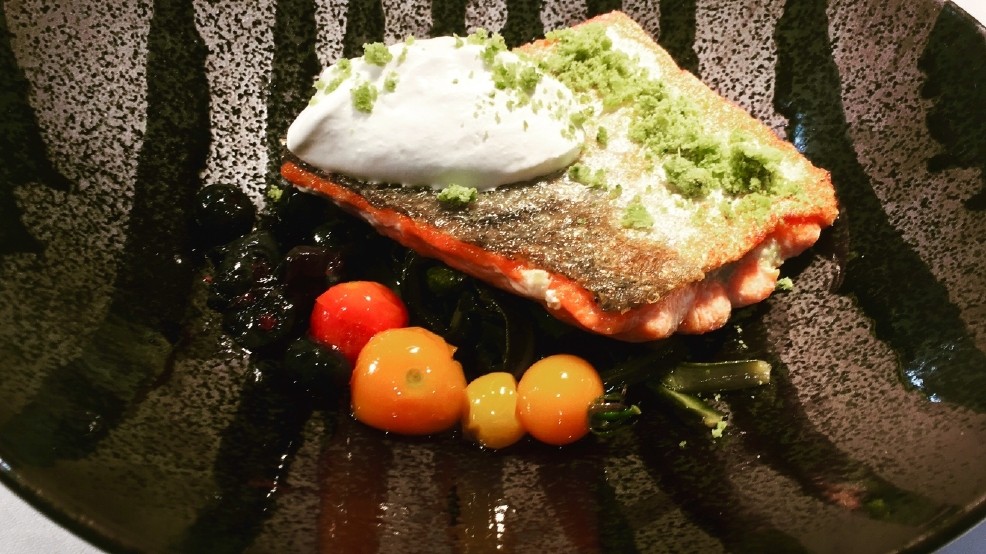 Sea to Table: There are plenty of fish in the sea

Overfishing and illegal behavior in the seafood trade is a serious issue in many fisheries around the world. A recent study found that the annual global catch was roughly 30 percent higher than reported in 2010. This means that approximately 109 billion metric tons of fish go unreported each year.

In the United States, the picture is a lot brighter. Thanks to the Manguson-Stevens Fisheries Conservation and Management Act that went into effect in 1976, many fisheries in the U.S. have been rebuilt over the past 40 years. As of 2015, 84 percent of federally managed stocks were not on the overfished list, indicating that the population sizes are at sustainable levels.

The problem? “Over 90 percent of all seafood consumed in the U.S. comes from outside the U.S.,” says Michael Dimin, the founding director of Sea to Table. “The U.S. has the world’s largest fisheries, we have the largest exclusive economic zone in the world, and we have the best-managed fisheries, yet we only want to buy cheap fish.”

Dimin’s business, Sea to Table, is working with chefs across the country to address this dichotomy. The concept is inherently simple: Sea to Table passes fish from the nets of fishermen directly to the hands of chefs and diners. Fish that land on a dock anywhere in the U.S. can arrive at a kitchen the next day. Making the logistics work is a little more complicated.

The Sea to Table team has spent years cultivating personal relationships with small-scale fishermen to provide a lucrative market for their wild, domestic, responsibly caught fish. “The seafood supply chain is kind of long and opaque and doesn’t really create value so much for fishermen, but creates value for the middle of the chain,” Dimin explains. “We thought it would be a good idea to figure out how to get a little better market for fishermen, and to get better quality fish to diners.”

Shortening their supply chain has allowed Sea to Table to stay competitive. “We cut so many links out of the supply chain, we’re able to pay a top dollar to the fishermen and still be about cost neutral in the marketplace,” Dimin says. The only players involved are the fishermen, the docks (which package the fish and often filet them on the spot), and ground transportation services like FedEx or UPS. As a result, their scope has grown significantly, and they now ship fish from more than 44 domestic landing points to more than 1,000 chefs in 46 states.

From the beginning, Dimin knew that chefs were the right messengers for his sustainable seafood campaign. “Chefs have kind of become the rock stars in our culture,” he says. “We find that enlightened, progressive chefs are able to tell the story to people of why they should be eating many of the lesser-known species or under-loved species that the ocean has. They understand the concept of sustainability and want to have people eating the right stuff.”

Though the business began in New York, Sea to Table has recently found many of those enlightened, progressive chefs right here in D.C. “D.C. is an extremely important market. It has high visibility and a strong culinary scene that seems to be growing stronger every day,” says Daniel Singhofen, a former D.C. chef himself, and now the mid-Atlantic sales representative for Sea to Table. Singhofen currently works with several area restaurants, including Kyirisan, The Royal, Oyamel, Whaley’s, and the Restaurant at Patowmack Farm.

Chef Tarver King at the Restaurant at Patowmack Farm was drawn to the company because it aligns with his sourcing philosophy. “It’s exactly the way we feel about land animals and the produce that we grow. We try and live in a symbiotic relationship with this planet,” he says, “Sea to Table really kind of helps us round that out in the oceanic department.” He adds that the freshness can’t be beat. “I’ve gotten fish that have wiggled in the box!”

Sea to Table is a supplemental seafood supplier for Chef Tim Ma, who uses the company for rare and unique items that add pizazz to Kyirisan’s menu. Ma recalls, “My email last week to Daniel was, ‘Hey man, I’m looking for the most interesting thing coming off the docks right now.’” That turned out to be blowfish from the Chesapeake Bay. (Don’t worry, Atlantic blowfish are non-toxic.)

Oyamel’s chef, Colin King, appreciates the transparency of Sea to Table’s business model. “You know exactly how long it’s been out of the water. You know exactly where it came from. You know that they’re using safe methods for catching the fish so they’re not destroying the ecosystem that they came out of,” he says.

For all the benefits, Sea to Table necessitates flexibility on the part of the chef. “Working with Sea to Table requires a chef to change how they generally work, which is a difficult thing to do,” Singhofen notes. Often that means adapting menus to what fish are currently landing on the docks, or ordering larger quantities of certain species.

Tarver King feels the results are well worth it. “You get fish directly from the fishermen. And that is leaps and bounds above any other seafood company, even the most expensive ones,” he says.

“Americans really only eat four species. They eat shrimp, which is almost all farmed from Asia, under sometimes less than perfect conditions. We eat farmed salmon, we eat canned tuna, and we eat white fish, primarily tilapia. And that’s more than two-thirds of all seafood consumed in the U.S.,” Dimin says. “Whereas the ocean has hundreds of abundant, well-managed sustainable, healthy, delicious, and affordable species.” Eating these species takes pressure off of overfished populations, creates new markets for fishermen, and is easier on the wallet.