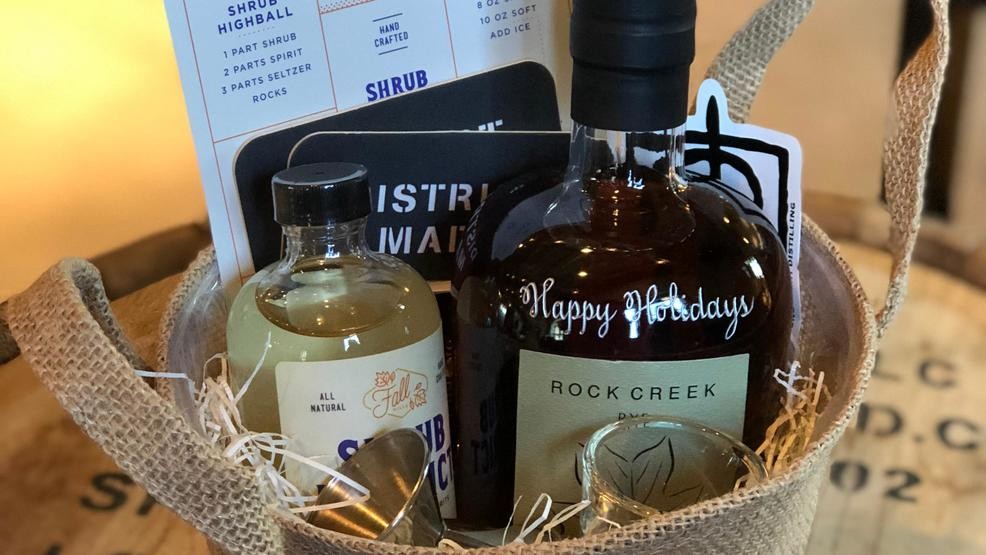 Don’t even think about showing up with a bottle of mass-produced wine for your host this holiday season. Or giving a friend or family member a ready-made kit from the liquor store with a played-out liqueur and some cheap glasses. Why would you, when there is so much killer stuff made locally?

These local boozy gifts will keep you on the nice list.

Want to give a handmade holiday gift that won’t suck? How about filling your own bottle of District Distilling C&O Tradesman Whiskey, unfiltered and cask strength, that’s aged in either French rum or apple brandy casks? Afterwards, you can personalized the bottle’s label by hand with a gift message or note to the recipient. “I have wanted to create an opportunity for spirits lovers to get a more in-depth experience with our distilling process since we opened,” says head distiller Matt Strickland. “[This] is a handmade gift that won’t get shoved in the bottom of a drawer.” The whiskey, a tribute to the canal that connected the Chesapeake and Ohio Valleys, touts notes of sweet corn, caramel, vanilla, cocoa and peppery rye, and at $60 for a 750ml bottle it’s the perfect treat for a spirits enthusiast. The experience is available Monday through Friday from 4pm to 8pm and Saturday and Sunday from noon to 8pm, and reservations are not required.

Local craft distiller (and Amalfi Coast native) Francesco Amodeo, who is known for his Italian-inspired amari and liqueurs is back with two new products. Amaro Tonico Ferro-Kina ($39.99/750ml) is produced from a family recipe that dates back to 1967, and is made by macerating a proprietary botanical blend in terracotta amphorae. He is just one of three distillers making this amaro on a commercial scale, which has notes of bitter lemon and gentian. C3 ($35.99/750ml bottle) is an infusion based on three types of California-grown artichokes, as well as cardoons and grapefruit and eighteen selected botanicals, and barrel-aged for twelve month. Both can be sipped neat or on the rocks, or used as a complex cocktail modifier (see his website for cocktail ideas). “With authentic ingredients and uncompromised flavors, each spirit is a true representation of it's parts, helping all kinds of imbibers experience something amazingly complex but true to their traditional styles,” Amodeo says. “Breaking away from the common idea of a gift, the uniqueness allows someone to give a gift that acknowledges generations of craftsmanship, with a modern flare.” You can purchase them at select D.C. retailers.

The sibling-run Maryland winery recently added three canned wines to their portfolio. Farmers Fizz is a sparkling option made from Chardonnay grapes; Carbonic is done in a fruity Beaujolais style with Cabernet Franc grapes; and Seeds & Skins in an orange-esque wine crafted from Pinot Gris that will appeal to rosé fans. Vigneron Drew Baker says wine in a can is a totable option for a day at the beach, on a boat, by the pool, hiking or camping. (Or, this time of year, taking them to the ski chalet) “For us, this project is all about making delicious wine accessible, travel-friendly and read to enjoy--anytime, anywhere,” he says. “These cans are a great holiday gift for wine lovers, adventurous souls and those who seek out unique experiences.” Old Westminster’s canned wines are sold in 375ml portions for $10.99; look for them in D.C. at Cleveland Park Wine & Spirits or Wagshal’s, and in Virginia at Crystal City Wine Shop.

The D.C. distillery is offering several holiday gifts that incorporate their spirits. The Drink Local Kit ($79.99) includes their Rock Creek Bourbon (D.C.’s first ever Bourbon!), Shrub District Apple Nutmeg Shrub and several cocktail recipe cards to stir liquid inspiration. The Bourbon & Rye Set ($112.99) features a duo of Rock Creek Bourbon and their Untitled Rye Whiskey, along with recipe cards for Bourbon and rye libations. You can also order a custom engraved bottle of Rock Creek Bourbon ($50) by emailing info@oneeightdistilling.com. "We found that many people enjoying craft cocktails in our Tasting Room and around the District are intimidated by the idea of experimenting at home--the ‘Drink Local’ basket creates a simple place to begin featuring locally-crafted spirits and shrubs, recipes and the tools to make that first great cocktail that will inspire the rest,” says co-founder Sandy Wood. “Complimentary personalized bottle engraving makes this basket is an especially memorable gift.” The kits are available in the distillery’s Tasting Room and at the Dupont FreshFarm Market, while the engraved bottles are only available in the tasting room.

Need a gift for the oenophile in your life? District Winery’s interactive wine touring and tasting ($35/person) offers an experiential, behind-the-scenes look at the winemaking process at this modern, innovative winery on the Waterfront. The tour lasts around one hour, and features a full walk-through of the wine production facility (which is closed to the general public), a tasting of seven different varietals and a take-home etched souvenir glass.

The award-winning winery in Madison, Virginia has just released two new offerings that can be purchased wrapped and ready for gift giving if you buy them together via their online store. The 2015 Quaker Run Chardonnay ($38/750ml bottle) has a long fermentation and extended lees character--which give it a yeasty/bready character you’d associate with Champagne and the roundness and texture you’d get from a Chardonnay that has undergone malolactic fermentation (though this wine has not.) It’s crafted from a small block of grapes planted on the side of a mountain in 1999 that’s exposed to near constant sun and wind, leading to perfectly ripened grapes and a very intense yet balanced wine. “We keep this separate from our ‘normal’ Chardonnay bottling, because the wine is uniquely concentrated and precise, a result of a long ripening period where the grapes maintain acidity,” says winemaker Ben Jordan. We make it from some of the oldest vines we farm, [and] there is never much more than a hundred cases per vintage from Quaker Run.” The 2015 Shenandoah Valley Cabernet Franc ($34/750ml bottle) comes from a five acre independent grower, and is meant to show how the grape is one that’s very reflective of place when made well. It was aged in primarily neutral French oak barrels and bottled after less than a year in the cellar. You can purchase the wines at the winery or their online wine store.

Ever wished you could find a cinnamon-flavored spirit that didn’t have the heat, burn or sweetness of Fireball? Look no further than this craft distillery in Bristow, Virginia, which specializes in infused unaged whiskeys. Their Cinnamon Whiskey ($29/750ml bottle)--which was originally called Cincerity but is undergoing a name change--tastes just like a cinnamon stick (in a good way.) And since the comforting aroma and flavor of cinnamon is ubiquitous this time of year, it’s super drinkable in coffee, hot chocolate, on the rocks or with apple cider--check out their website for even more cocktail ideas. You can purchase the whiskey at the distillery, online through Potomac Wine & Spirits or at Virginia ABC Stores.

This new Virginia winery owned by Chris Pearmund (of Pearmund Cellars) is crafting some pretty stellar wines. A fun option to introduce friends and family to what they are doing is the Mulled Wine Kit ($50). It includes two 750ml bottles of their Norton, a rustic red that mingles perfectly with the enclosed packet of Crown Mulling Spices. The kit also includes some recipe cards to help you get started. Pick up the kit at the winery--and while you are there do a tasting of their other wines.