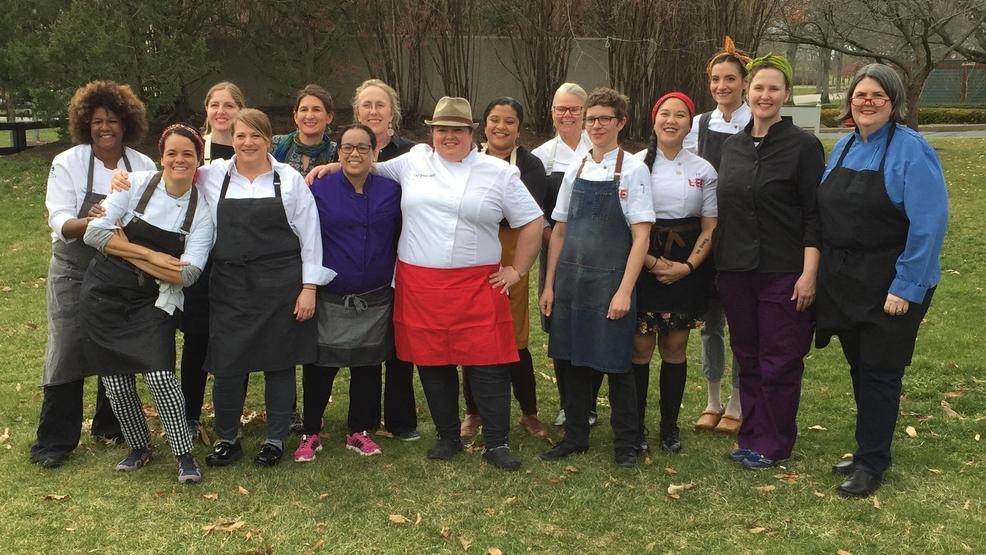 An organization called FoodChain in Lexington, Ky. held its third annual FEAST fundraising dinner earlier this week, and chefs Amy Brandwein of Centrolina in D.C. and Joy Crump of Foode in Fredericksburg were once again among the featured all-female chef lineup for the event.

But what exactly were two beloved DMV chefs doing at a fundraiser in Kentucky? It turns out that both attended a Chefs Boot Camp for Policy and Change put on by the James Beard Foundation in 2016, where they met and bonded with Kentucky superstar chef Ouita Michel.

“She’s like the Oprah of Lexington, Kentucky,” says Crump. “She runs several restaurants and is a force of nature.”

That force of nature invited Brandwein and Crump to participate in the first FEAST event three years ago, along with two other female boot camp attendees that year, Abra Berens of Granor Farm in Three Oaks, Mich., and Jamilka Borges of Spoon in Pittsburgh. The five chefs were delighted to reunite for this event, which so nicely tied in with the mission of the boot camp where they all met—to help significantly reduce food waste.

It didn’t matter at all to Crump that this would benefit a region so far from her own.

“It honestly is one of our favorite events,” she says. “It’s so community driven, even though it’s not our direct community. It’s the food community, which doesn’t matter what city you live in.”

The event has grown to include 15 local and national female chefs this year, raising thousands just in the live auction alone. The funds earned in those early days made a noticeable difference that kept Brandwein and Crump coming back.

“The people involved in FoodChain are incredible. It’s really nice to see something start smallish and watch it grow,” says Brandwein.

Crump is similarly impressed with FoodChain’s progress, such as expanding its facilities.

“Three years ago, it was a blueprint on a wall, and now it’s functioning," she says. "The hard work takes place during the 364 days in between, but the event is a great way to bookmark the progress for us.”

In a tasty effort to assist FoodChain with its mission to educate and bring fresh foods to low-income residents, around 300 food lovers bought tickets to the FEAST event, where they moved around the room tasting such dishes as cardamom-brined pork belly with a Thai-inspired salad and thinly sliced beef tenderloin over green tomato okra fritters. Brandwein opted to incorporate Kentucky lamb into her lamb and kale sausage skewer served over cannellini bean puree. Crump made a vegetarian dish highlighting roasted root vegetables with savory granola and spicy labneh over parsnip puree and garnished with a pear chip.

Brandwein says Michel supplied participating chefs with a list of local ingredients and those grown by FoodChain, and added that she was extremely happy with the quality of the meat. Crump adds that she and other chefs use that ingredient list as a jumping-off point, but ultimately stay true to who they are.

“What Ouita invites and encourages us to do is to use her locality to create the dishes that we love,” Crump says.

Does the fact that the event features an all-female lineup of chefs make much of a difference? Crump says not really, although it’s a lovely perk to be able to gather with peers who have experienced a lot of what she has dealt with professionally. For Brandwein, it’s a great way to shine a spotlight on the positive impact people like Ouita Michel have in their communities.

“As a female chef, she’s a galvanizing force in the city,” Brandwein says, “and I think she sets a really great example of what a female chef looks like. I think it is important to pull together women from all over the country. It adds a unique, powerful element to the event.”