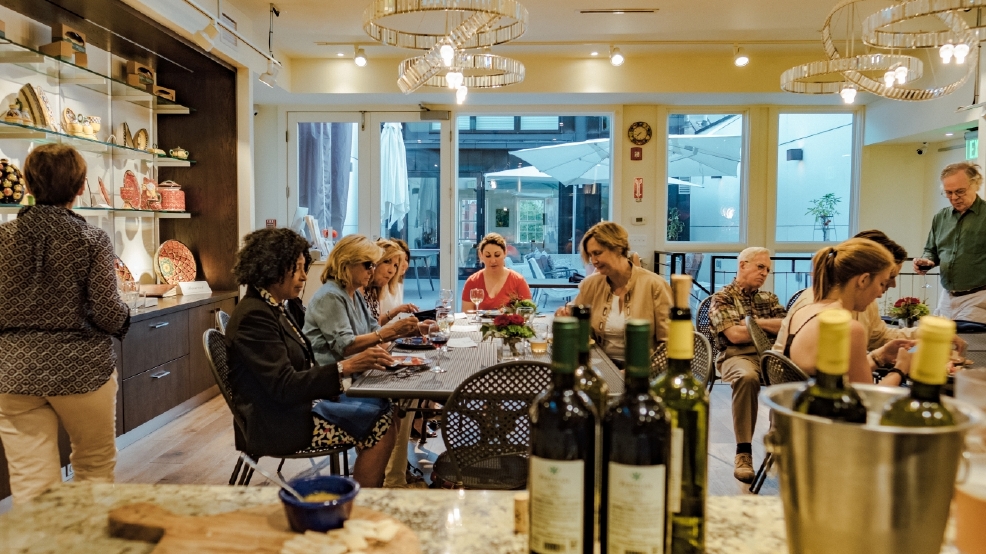 Via Umbria -- Bartender Matt Demia from True Syrups will host a class, “Cheers to Powerful Women,” focused on classic American cocktails inspired by iconic American women at the Italian café and market in Georgetown. A portion of the proceeds will go to Planned Parenthood. January 19 and 20 at 7:30 p.m., $25 per person (not including tax). (Jeremy Goins)
SEE MORE

Where to eat & drink during the Women's March on Washington

On Saturday, January 21, tens of thousands of protesters will take part in the Women’s March on Washington. That’s a lot of hungry and thirsty people to feed. Luckily, restaurants and bars throughout the District are making them feel extra welcome by offering special deals, throwing parties, or are helping raise funds for causes that many marchers likely support. (Unless otherwise specified, the specials are only available on January 21).

On the eve of the march, the Japanese-inspired restaurant in Petworth will host a party with live music, drinks, and food. Ten percent of ticket sales will be donated to Planned Parenthood. January 20 from 5 p.m. until 1 a.m. Tickets are $50 in advance and include entry, two drinks (additional drinks may be purchased separately), and unlimited food. Any remaining tickets will be $70 at the door.

Available from 11:30 a.m. until 2:30 p.m., the March & Lunch three-course prix fixe special ($30, not including tax and tip) at the Georgetown restaurant will include options such as chestnut soup, the Grill Room burger, and bread pudding.

The Equal Pay Post-March Happy Hour from 5-8 p.m. features beer from the woman-owned Denizens Brewing Co. As a nod to the pay gap between men and women, the beer and select appetizers sold on the main floor of the Adams Morgan watering hole will be marked down 21 percent.

There will be a 15 percent discount off of brunch or dinner to anyone who mentions the march at the temple of chocolate in Penn Quarter.

Bartender Matt Demia from True Syrups will host a class, “Cheers to Powerful Women,” focused on classic American cocktails inspired by iconic American women at the Italian café and market in Georgetown. A portion of the proceeds will go to Planned Parenthood. January 19 and 20 at 7:30 p.m., $25 per person (not including tax).

The market side of the City Center Italian eatery will offer complimentary hot chocolate, while restaurant diners will get a complimentary glass of prosecco. Ten percent of proceeds from the market that day will go to Running Start, which works to inspire and educate the next generation of female political leaders.

From January 16-21, proceeds from the march-inspired cocktail the Bigger Picture at the modernist Greek restaurant on the 14th Street corridor will support the Human Rights Campaign.

The Dupont Circle location will tap a keg of Denizen Brewing Company’s Lost Lord and donate a portion of the proceeds for each 12-ounce pour ($5) to the League of Women Voters.

In addition, a growing number of establishments will participate in the All in Service DC fundraiser from January 20-22 with a portion of the proceeds going to a variety of organizations, such as Martha’s Table, Chesapeake Bay Trust, and Mary’s Center.