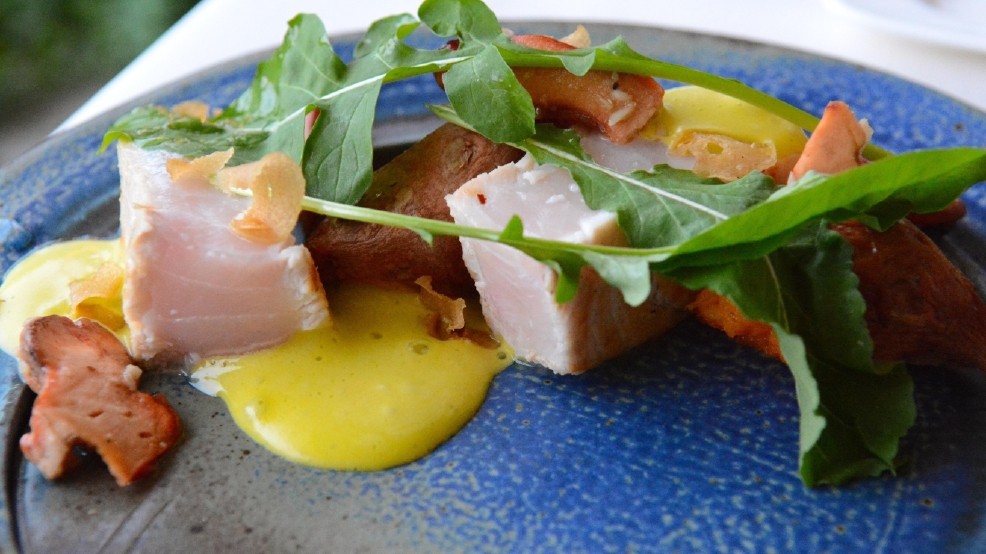 We can think of at least 11 reasons you need to be dining in NOVA tonight. Patowmack Farm (Image: Laura Hayes)
SEE MORE

Virginia restaurants are uniquely positioned to drop plates that dazzle thanks to their addresses in a state with bountiful farms and orchards, plus the Chesapeake Bay. Yes, it may take a little extra effort to reach the further corners of Northern Virginia to experience some of the best the Commonwealth has to offer, but it's worth it. Bookmark this bucket list to aid you in your gastronomic exploration of must-try restaurants.

The Restaurant at Patowmack Farm

Chef Tarver King is cooking some of the most inspired food in the Commonwealth and his muse is the land that surrounds the bucolic Restaurant at Patowmack Farm property in Lovettsville. King was foraging before it was pet hobby of chefs everywhere, so dishes often include pawpaws, stinging nettles, cool 'shrooms and other finds. The restaurant recently axed the "grown," "found," and "raised" menus in favor of one, nine-course prix fixe dinner menu ($94 or $144 with wine pairings). Spring highlights include stinging nettle soup with charred onion juice, chicken wings and chickweed and Mangalitsa pork roasted in lardo and sorrel with takoyaki, ramps and mushrooms. Go for the food, linger for the surroundings.

Experience small town hospitality and big city flavors simultaneously at the pearl of Clifton,Trummer's on Main. The menu nods vigorously at the South with menu items like chicken fried oysters and a smoked BBQ pork shank served with turnip greens and spoonbread. But the food is not one note. The new American, seasonal cuisine also includes stunners like octopus Bolognese over cuttlefish fettuccini with sea beans, togarashi and gremolata. Trummer's is worth the trip for the wine and cocktail programs too. Stefan Trummer is quick to put on a fire show or scoop sherbet in crafting a drink you'll be Instagramming.

The best seat in the house at Vienna newcomer, Clarity, is at the counter looking into the open kitchen. There, you can catch Chefs Jonathan Krinn and Jason Maddens turning out dishes like seared foie gras with strawberry, Nutella powder and house brioche or eggplant tikka masala with grilled bok choy, house naan bread, saffron yogurt and fried chickpeas. The chefs' eagerness to make everything in house and access the globe for inspiration is palpable during dinner. Go a la carte or spring for the tasting menu ($65 or $100 with wine pairings). The drinks equally impress, and often include ingredients from the spice rack like the tamarind-chili margarita or Chinese 5-spice Old Fashioned.

Dining at the Inn at Little Washington remains a fairytale experience from the lux dining room to dishes starring ingredients from local farms that arrive with fanfare. Some, like the lamb loin carpaccio served with a scoop of Caesar salad ice cream, remain ingrained in your memory for years. Opt for one of three tasting menus from Chef Patrick O'Connell"our enduring classics," "menu of the moment," or "the good earth." If you're the kind of home cook that owns an immersion circulator or that has a culinary crush on O'Connell, there's the Inn's stagiaire program. It invites guests into the kitchen in a working environment in two or three-day stints. You can even dictate the kinds of skills you'd like to learn or brush up on.

Though on the fringe of what most consider Northern Virginia, The Shack in Staunton is worthy of the stretch. Chef Ian Boden only needs 400 square feet to rock your world with his refined yet unpretentious creative food. The Appalachian-inspired menu changes daily, but one early day in May, Boden served Southern fried sugar toads with chili, herbs and fish sauce caramel; Sardinian gnocchi with lamb Bolognese and smoked cocoa nibs; and soft shell crabs with bok choy, pickled green tomatoes and watermelon molasses. Visit Wednesdays and Thursdays for an a la carte menu or Fridays and Saturdays for a three ($45) or four-course ($55) prix fixe menu. The Shack also serves Sunday brunch.

One of the most crucial moves at 2941 Restaurant is saving room for dessert. Pastry chef Caitlin Dysart is her own world when it comes to sweets, and we're just lucky to visit. But first, dinner at the Falls Church wonder that doesn't let its office surroundings mar its beauty starts with a parade of eye-catching dishes from Chef Bertrand Chemel. The French chef's mentors include Michel Gaudin and Daniel Boulud, no big deal. Okay, big deal. Spring dishes you'll remember include lobster carpaccio with white asparagus and kalamansi-mango coulis; fennel raviolini with lamb shoulder, basil and ramps; and roasted duck breast with baby bok choy and spicy strawberry marmalade. Also dip into Sommelier Jonathan Schuyler's wine list.

If you can't fall in love at Restaurant Eve, it's time to join the lonely hearts club. Old Town, Alexandria's quintessential date spot helmed by Chef/Owner Cathal Armstrong still sings after 12 years. Put your meal in Armstrong's capable hands by going the tasting menu route ($105 for five courses; $140 for seven courses) and surrender to whatever beverage savant Todd Thrasher wants to pour. For a slightly more casual and adventurous evening, the restaurant is still offering its hot and funky Asian tasting menu ($65) that pulls from Thailand and the Philippines.

April marked the 40th anniversary of L'Auberge Chez Francois's move to Great Falls from DC where it first opened as Chez Francois in 1954. Now operated by Francois Haeringer's sons, Jacques and Paul, the restaurant continues to stand the test of time. Peek at the expansive, organic gardens on your way in and you might believe you're in the French countryside even before dinner begins. Chef Jacques Haeringer's menu is a who's who of French classics: lobster bisque, escargot, warm foie gras on toasted brioche, rack of lamb with herbs de Provence and chateaubriand. However, local Virginia ingredients are often folded in, reminding guests of the region's bounty. Choose between prix fixe and a la carte dining options, and note that they're launching brunch at the more casual Jacques Brasserie.

Every month, Chef Jonah Kim's ramen shop brings new surprises. First it was sake and soy brined fried chicken on Sundays. Now it's steamed buns in flavors like oxtail, tuna poke, and shrimp & ham. Kim keeps us guessing and always reminds us that Yona is not just a noodle house. More permanent dishes like the buzzed about uni waffle, the king crab ramen with uni butter, and hamachi sashimi make Yona bucket-list worthy. So too does the design by Natalie Park. As an added bonus, unlike every ramen shop on earth, Yona takes reservations.

This Mosaic restaurant from the Rappahannock River Oysters team celebrates the mid-Atlantic by slaying it at seafood starting with mouthwatering platters from the raw bar. Try Virginia oysters raw or roasted in three flavorsbourbon bacon, deviled or BBQ. Other highlights include the innovative plankton pasta with clams and guanciale, wood-roasted rotisserie seafood and (believe it or not) the burger. Chef John Critchley, whose resume includes DC's Bourbon Steak, helms the kitchen. He tells us Brine will launch a "chef's whim" omakase menu at the raw bar Thursday-Saturday evenings. Another bonus? Brine has one of the longest whiskey lists in Northern Virginiatry a few in flight form.

Yes, a bakery belongs on the bucket list. Red Truck Bakery's pies, cakes and breakfast sandwiches are next level. Even President Obama vouched for Red Truck Bakery's pies this pie day (March 14). Pop into the original Warrenton location or the larger Marshall shop for soup and a sandwich and load up a to-go bag with apple pie, lemon & blueberry moonshine cake, and Red Truck Bakery granola. Owner Brian Noyes who served as art director of newspapers and magazines you've more than heard of (The Washington Post, House & Garden, Smithsonian) named his passion project after a 1954 Ford farm truck he bought from Tommy Hilfiger. The bakery continues to rake in accolades, head there to see why.