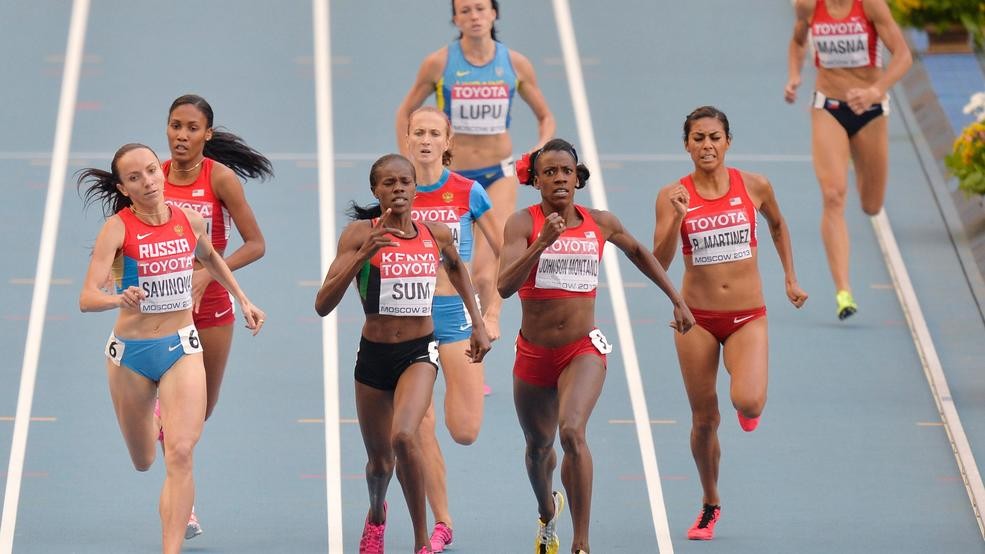 FILE _ In this Aug. 18, 2013, file photo, from front left to right, Russia's Mariya Savinova, Kenya's Eunice Jepkoech Sum, United States' Alysia Johnson Montano and United States' Brenda Martinez compete in the women's 800-meter final at the World Athletics Championships in the Luzhniki stadium in Moscow, Russia. Montano will receive bronze medals she was cheated out of by Savinova who finished ahead of her at the 2011 and 2013 world championships but was later disqualified for doping. (AP Photo/Martin Meissner, File)
SEE MORE

American Alysia Montaño will receive bronze medals she was cheated out of by a Russian who finished ahead of her at the 2011 and 2013 world championships but was later disqualified for doping.

Montaño said Monday on social media that she had been invited to world championships in Doha, Qatar, where she'll receive the medals for the 800-meter races in a ceremony on Sept. 30.

She finished fourth both years but was moved up in the standings when Russian Mariya Savinova was disqualified for doping.

Montaño has been an outspoken voice for athletes who get robbed of their moment on the podium.

On Instagram, Montaño thanked Russian whistleblower Yulia Stepanova for exposing the Russian doping and said "athletes who were doping stole precious moments and money from clean athletes including me, who never got the outdoor podium moment that I earned."