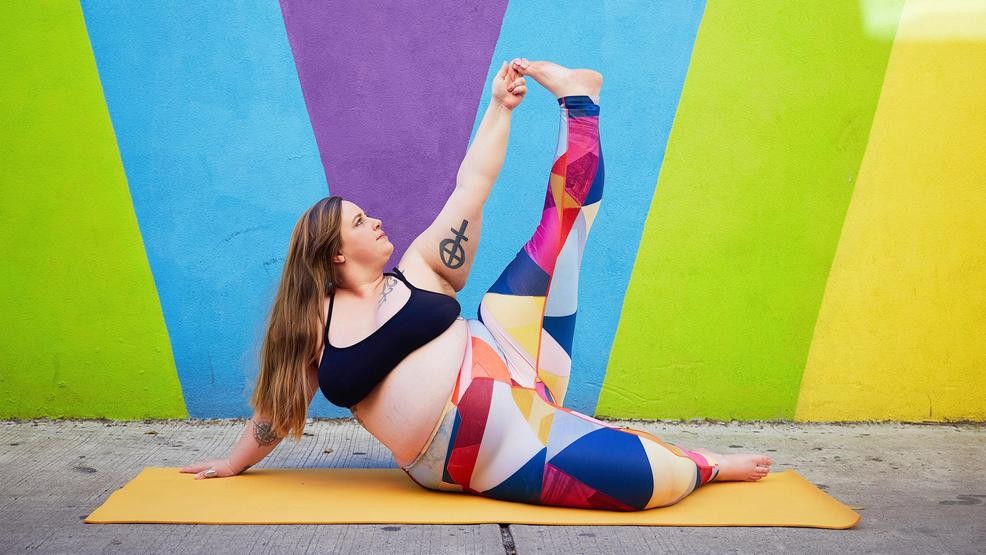 "So often, when I go take a class, I'm the only fat person in the room; but when I'm teaching the class and a fat student comes, they never have to feel that way because even if there's not another fat student, there's a fat teacher." (Image: Cynthia Zuniga/cinthyazuniga.com/@zunigaphotography)
SEE MORE

If you've ever glanced around a D.C. yoga studio between your downward-facing dog and child's pose, you might notice the majority of your classmates are often white, thin, able-bodied women. Melanie Williams' class looks different. It's not Melanie's partially shaved head or position at the teacher's mat that immediately draws the eye; Melanie is fat - they take up space in a yoga studio normally populated by thin bodies.

Fat is often lobbed as an insult - a three-letter euphemism for lazy, nonathletic, burdensome and inadequate. Melanie is none of those things. Melanie is a leader at the Yoga & Body Image Coalition and works with Accessible Yoga to help bring inclusive teacher training to cities around the country, opening up yoga to a wider audience. In D.C., Melanie teaches public classes at five yoga studios, in addition to private lessons, plus their upcoming workshop on yoga and body image at Numi Yoga in College Park, M.D. They're a tour-de-force of encouraging radical self-love and Melanie has a track record of helping their students make peace with their bodies and celebrate the space they occupy.

In the U.S., yoga is often relegated to a fitness activity. However, the movement portion of yoga that most people are familiar with is actually just one of the eight limbs of yoga. At its most basic and accessible form, yoga can be a way to develop a different relationship with yourself and the physical space that you occupy, a practice Melanie is trying to bring to an audience that may feel shut out by the fitness culture around westernized yoga.

"When it feels like your body is not welcome in a space, you're not going to go to that space," Melanie explained. "You can't hide that. People need to be able to go to a space where they don't have to hide that, where they can be with every part of themselves because, without having a space to practice that, they're never going to get it. It's about giving people access to a relationship with their body that they may not have on their own or be given in other contexts."

Melanie, a Wisconsin native who moved to The District three years ago, didn't always stand out in the run-of-the-mill yoga studio. Although their first experience with yoga was playing and re-playing a 'yoga for fat loss' DVD as a teenager, Melanie became more serious about their practice while living in San Francisco in 2013. Melanie was struggling with an eating disorder and over-exercising.

"I was training for a triathlon and half-marathons so I was very cardiovascularly fit," they explained. "The power yoga class, that sort of thing, was my bread and butter."

Melanie's relationship with their body and yoga shifted in tandem as Melanie entered training to teach yoga in 2016.

"I started my yoga teacher training when I was still immersed in [the fitness] world, but then I had a very minor injury that made me stop running," they said. "I was spending more time with people who were more body positive than I was and I started learning from the. As I became more immersed in the philosophy of yoga through training, I started to conceptualize it differently. All of those things, together, led me down a direction of healing for myself, which ultimately led to me gaining a lot of weight."

Melanie initially struggled with the transition from taking advanced movement classes to practicing yoga in a bigger body, but part of their frustration stemmed from the lack of accessible teachers who looked like them. Over the next few years, Melanie sought out training so that they could be the teacher and mentor that they had wanted.

"I had to learn to adapt my practice, because by then, it was so important to my sense of who I was as a person, my spiritual identity, my mental health, that there was no going back," Melanie said.

The core of Melanie's teaching philosophy is "an approach that looks at person first and then makes the shape fit them, versus the other way around," they said. Body positive yoga isn't just about size, it's a term that encompasses a multitude of identities and abilities and, as Melanie explains, a way of giving students more personal agency in their practice.

“The culture of D.C. is highly competitive and it’s [not] body positive. I would say it’s obsessed with traditional western fitness, with an emphasis on movement for the purpose of weight loss or an aesthetic," Melanie said. "It’s so enmeshed in the culture of competition over power and that thinness is equated with power."

There's nothing wrong with being whatever shape you are - be that fat, thin, or anything in between. However, women who are considered overweight or obese by body mass index (BMI) are denied jobs and make less money than their thinner counterparts, both of which are often considered markers of worth in a city of ambitious people.

For their part, Melanie is glad to create a less competitive space in D.C. that respects every body. However, the people who have walked into Melanie's classes don't always take them as seriously because of their size.

"I have definitely had students walk out of my classes before," Melanie said, but they acknowledge that there was a time in their life where they might've considered doing the same thing. "When I was still in my eating disordered, exercise disordered fitness brain... I would’ve walked into a class, seen a fat teacher, and had my internal judgments about that."

For Melanie, being visible as a fat, non-binary yoga teacher is a form of activism. The narrative about fat people in our culture doesn't leave room for a someone doing a binding pose with their stretch marks, fat and body hair on display; but Melanie is there, at the head of the yoga class, in the most powerful position in the room.

"It's good to see yourself reflected in [a yoga space]," Melanie said. "There are not a lot of fat practitioners, let alone teachers. So often, when I go take a class, I'm the only fat person in the room; but when I'm teaching the class and a fat student comes, they never have to feel that way because even if there's not another fat student, there's a fat teacher."

(Editor's note: Although this feature is usually called Extraordinary Women of D.C., we're using this space to showcase anyone who is making a difference in D.C., whether they identify as a woman, queer or non-binary. If you know someone who you think deserves to be featured, drop us a line at aandrade@dcrefined.com)