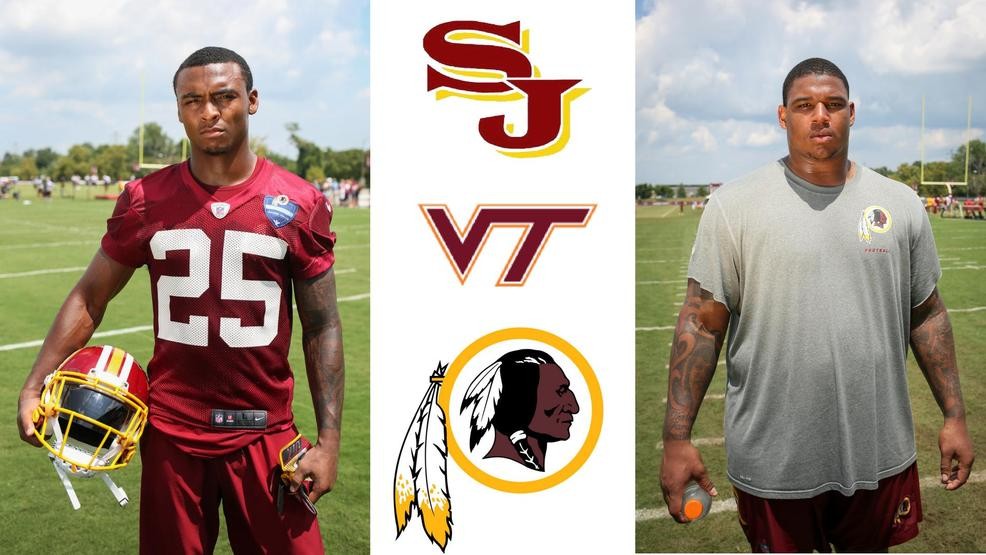 21-year-old Tim Settle and 22-year-old Greg Stroman grew up together in Northern Virginia, played high school football together at Stonewall Jackson and went on to be teammates for three years at Virginia Tech. Now, against all odds, the buddies have been drafted to play for their home team, the Washington Redskins. (Image: Amanda Andrade-Rhoades/ DC Refined)
SEE MORE

Think about this for a minute: how many of the people that you've known since you were knee high are you still in contact with? Do you know what the highlight of their High School years was? Do you know where they went to college? And do you know exactly how they felt the moment they realized their life-long dream was about to come true?

For two of the Redskins 2018 draft picks --Greg Stroman and Tim Settle -- the answer to all these questions is an easy yes, partially because they were by each other's side through just about all of it. Although to be fair, Stroman admits that the six-foot-three, 330-pound Settle was never really knee high.

21-year-old Settle (nose tackle) and 22-year-old Stroman (cornerback) grew up together in Northern Virginia, played high school football together at Stonewall Jackson leading their team to three straight playoff appearances and went on to be teammates for three years at Virginia Tech. Now, against all odds, the buddies have been drafted to play for their home team, the Washington Redskins.

"I Face Timed him immediately when I found out," said Settle. "And I was like, 'three for three,'" adds Stroman.

And when I say against all odds, I truly mean it, considering that less than two percent of NCAA senior players are ever drafted by an NFL team; that number is less than one percent for high school seniors. For two lifelong friends to both make it to the NFL, in the same draft and to be chosen by the same team, seems almost storybook perfect.

"Greg's been like my big brother, watching over me, making sure I stay right," said Settle. "And that's why we are both where we are right now."

But Settle and Stroman both know that their happy ending is far from guaranteed at this stage in the game. The 5th and 7th round draft picks will battle the heat of training camp for 11 more days, before facing team cuts throughout preseason. The duo, however, believes their connection will be an asset mentally.

"We keep the vibe and positive energy for each other," says Stroman. "I doubt any of us will be down, but if we get down, we got the other to pull us back up."

Plus, it doesn't hurt that the two have a healthy level of competition with one another that pushes them to always want to one-up their teammate.

"When I see him do something well on the field, I just want to match it," says Settle. "He can get on me, I can get on him and know it's all out of love. It's motivation, and it's always been like that. But I've never been able to touch him in in practice. I don't know why, he's just my kryptonite. But if I catch him on the slant, bye bye birdie."