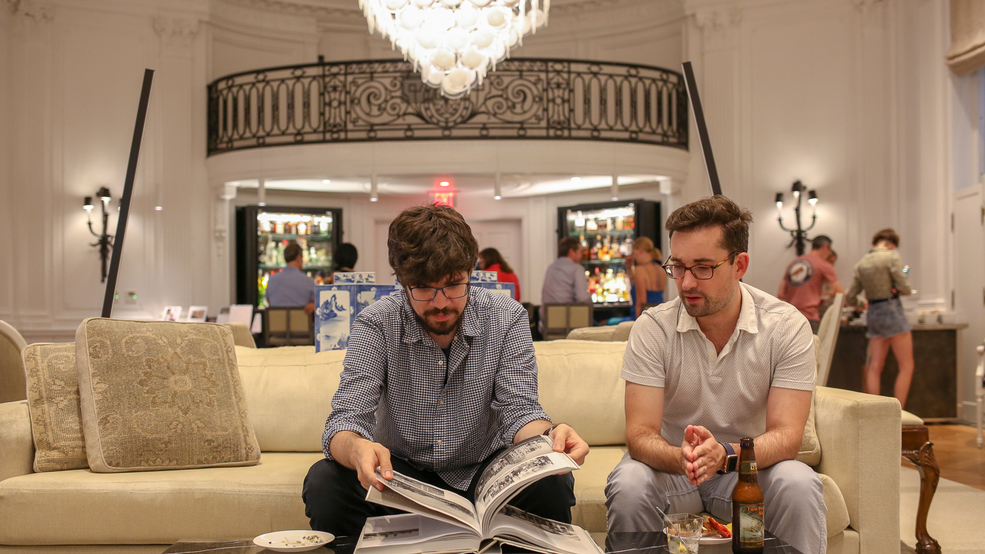 Can an apartment come with a built-in social life? Apparently, yes.

Moving to D.C. can be lonely. Even in a city full of transplants, it's hard to bond with strangers, especially if you're living alone or with a partner. However, some apartment buildings are looking to bridge that social gap by bringing together neighbors over happy hour, shared work spaces and entertainment options.

Enter Ampeer Residences, a luxury apartment building built around the historic Patterson Mansion in Dupont Circle. Unlike many luxury buildings, their common areas are often bustling with people who are happy to chat or just exchange a smile over the complimentary continental breakfast offered every morning.

The secret to success, according to general manger Enrique Lorie, is "activating" those communal spaces. In Ampeer's case, that means they offer work space with WiFi, happy hour with free hors d'oeuvres, rotating artwork, occasional concerts on their overlook and grab-and-go breakfast in the morning.

The fact that Ampeer has been able to build a friendly atmosphere is especially remarkable considering they offer short-term leases, meaning some tenants may not be incentivized to invest in their social lives. However, Lorie reports that 20-30 people show up to happy hour on any given night. It's not uncommon for luxury apartment buildings to occasionally offer happy hours or musical entertainment, but by offering up activities where residents can run into their neighbors and giving them something to bond over and experience together almost every day of the week, Ampeer is giving their residents a way to be social on their home turf in a way that doesn't feel forced or awkward.

It doesn't hurt that Ampeer is designed for entertaining - its main residence hall is framed around The Patterson Mansion. Its most famous resident was Eleanor "Cissy" Patterson, a descendant of Gilded Age newspaper moguls and political elites. Cissy was a legend in her own right - she was one of the first woman to head a major U.S. newspaper, and she frequently hosted socialites in The Patterson Mansion. Cissy's home was so well-regarded, President Calvin Coolidge and his wife stayed there during the 1927 White House renovation. President Coolidge also invited Charles Lindbergh to come to The Patterson Mansion after his non-stop transatlantic flight.

Although there aren't any Cissy Patterson-style blow out parties at The Ampeer Residences, the main ballroom is still used for socializing during happy hour. Residents could peruse coffee table volumes or run back to their rooms with their drinks, but Ampeer has fostered a culture of being social - several residents welcomed me to the building, or stopped to chat with me about that night's musical entertainment, R&B harpist Tulani.

The luxury of having a space and atmosphere where you can easily make friends isn't cheap - the units at Ampeer range between $3,500 and $7,500. But in a city full of strangers, there's something comforting about knowing your neighbors.