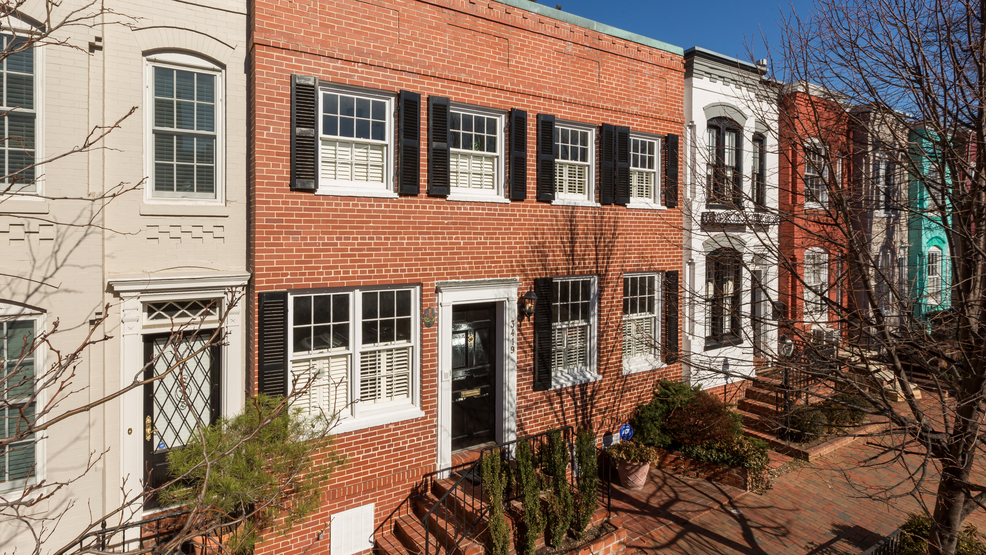 A three-bedroom, three-bath brick house in Georgetown was once the setting for John F. Kennedy and Jacqueline Bouvier's first meeting -- a blind date at a dinner party orchestrated by mutual friends. The house, built in 1895, has since been renovated and nearly doubled in size, and it was put on the market on February 8 for $1,725,000. (Image: Sean Shanahan) <p></p>
SEE MORE

You never forget the where and when of meeting your future spouse. But when your name happens to be Jacqueline Bouvier, the entire world wants to hear the story. And it just so happens that Jackie and John F. Kennedy's love story starts in Georgetown, the oldest neighborhood in D.C.

"It was a typical row house, just 16 feet wide. Three narrow steps, flanked by wrought-iron handrails, led up to the front door. Jackie announced herself with the brass knocker, and the door swung open to reveal the smiling face of her friend Charles Bartlett," says an excerpt from Edward Klein's biography of the couple "All Too Human: The Love Story of Jack and Jackie."

According to the book -- and several pieces of correspondence which can be seen in our photo gallery -- Jackie had been invited to journalist Charles Bartlett's home for an intimate dinner party in May 1951, thrown for the express purpose of introducing the future 35th president of the United States to his future first lady. The juiciest bit is that Charles' wife, Martha, was actually the one pushing her husband to find someone for Jackie, because she knew her husband was interested in Jackie, and Martha wanted Jackie off the market. She set the dinner party up with "several other couples so it wouldn't look too contrived," according to "All too Human."

After an evening of cocktails in the garden, chicken casserole in the living room and a rousing game of Charades, Jackie left the party early for another date, and JFK chased her out to her car to ask her out -- she turned him down! But eventually Jackie stopped playing hard to get, and the lovebirds were married two years later in Rhode Island.

The scene of this epic blind date is a stately brick house in Georgetown at 3419 Q Street, built in 1895, that has just been put on the market today for $1,725,000. Since 1951, the property has been renovated and expanded to include the house next door, but it retains numerous period details, such as original "hardwood floors, a wood burning fireplace, two skylights and an expansive gourmet kitchen with stainless steel appliances," according to the property listing.

"The property is a wonderful example of Georgetown's extraordinary history, from construction in 1895, to the meeting of JFK and Jackie Bouvier, to being combined into the wonderful home it is today," says listing agent Michael Brennan Jr.

In case you were one of the few folks who didn't hop into the photo gallery straight away, scroll back to the top and take a tour through this stunning home! For more information, please see the full listing here, or contact realtor Michael Brennan Jr. of TTR Sotheby International Realty.

You can take a tour inside the home with ABC7's Caroline Patrickis below.