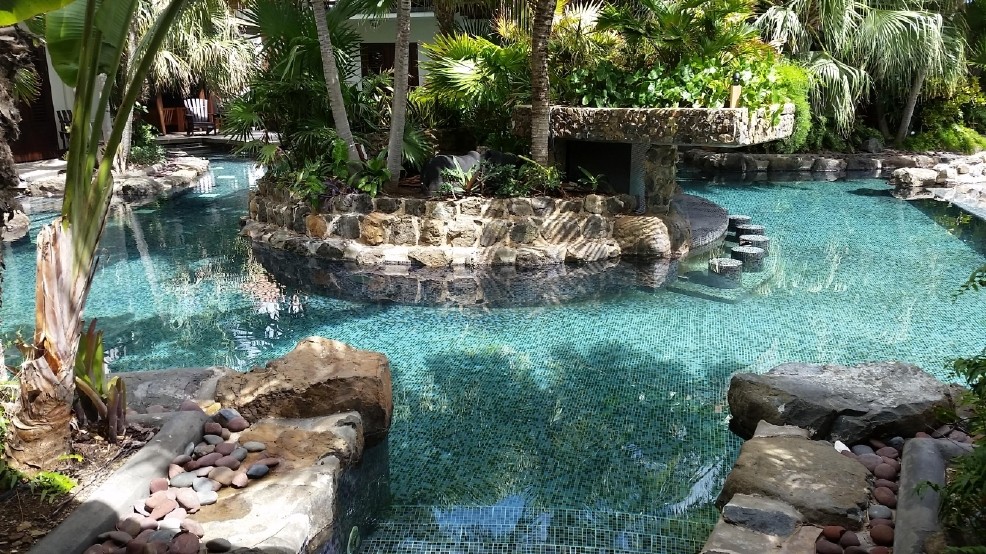 Craving a tropical getaway that’ll make your friends turquoise with envy? Head to Curaçao. One of the ABC islands (along with Aruba and Bonaire) that are all but out of the hurricane belt, this island -- located forty miles from the coast of Venezuela -- is chock full of beaches, blue sky, scuba diving spots and eclectic food and drinks. So what are you waiting for? Blue looks so good on you! (Image: Kelly Magyarics)
SEE MORE

Blue Heaven: 9 reasons to pack your swimsuit and vacay in Curaçao

Craving a tropical getaway that’ll make your friends turquoise with envy? Head to Curaçao. One of the ABC islands (along with Aruba and Bonaire) that are all but out of the hurricane belt, this island -- located forty miles from the coast of Venezuela -- is chock full of beaches, blue sky, scuba diving spots and eclectic food and drinks. Getting there is easy, as American Airlines operates flights there, via Miami, from both Dulles and Reagan National Airports. So what are you waiting for? Blue looks so good on you.

There really is a beach for everyone...

Curaçao is called the Island of 35 Beaches with good reason. The water takes on a gorgeous, almost electric blue-green color, even on those rare days when the sky is overcast. I visited when Hurricane Matthew was skirting by and the sun was fighting to peek through the clouds, but it was still utterly enjoyable; the vast majority of the time the weather is a pleasant 80 degrees and sunny. Like a little adventure with your beach time? Head to Shete Boka on the west side, which translates to “seven inlets.”There, you can hike, look for sea turtles and step out onto the wooden platform at Boka Tabla to watch the huge waves crash against the rocks and into an underground cavern--it was crazily impressive and just a little bit scary. Playa Knip (Kenepa) has tons of space for locals and tourists alike. Bask in a palapa-shaded lounge chair, or swim out to the tethered platform and spot colorful fish below. Though a sign cautions against cliff diving because of shallow waters and lots of scary-looking rocks, the trampled on, worn down brush proves that there are lots of thrill-seekers willing to take the risk. (I was not one of them.) Smaller and decidedly more intimate, with colorful boats docked on the beach and cliffs on each side lending a cozy, in-the-know vibe, Playa Lagun makes up in charm what it lacks in space--and a cliffside walk up to Bahia Beach Bar rewards you with an even better view and some tasty libations (diving fans can opt to stay in the adjacent Bahia Apartments.) My favorite beach, though, was Playa Porto Mari. Its dock and blue water beyond make for perfect selfies, the beach is wide with room for everyone, and it also has a fun beach bar serving tropical drinks, local beer and light bites.

..and if you like tranquil water? Man-made coves are a resort trend on Curaçao.

Let’s just say I’m not a big fan of huge waves. I’d rather pretend the sea was one giant, clear azure swimming pool. If you share my sentiment, you’ll love the resort beaches, which are often cordoned off with rocks that break the surf, leaving the water just off the sand calm and float-worthy. I saw beaches like this at Sunscape, Curaçao’s only all-inclusive resort, at Avila Resort, and at Baoase, the island’s only five star resort (more on that later). Swimmers and snorkelers who want to see what’s around the many coral reefs can venture beyond; if you need me, I’ll be on a floaty.

A live and let live attitude permeates the island.

Curaçao’s first inhabitants are thought to have originated from the Amazon basin. The Dutch West India Company settled the capital of Willemstad in the 1600s, and made it a hub for the Atlantic Slave Trade. Sephardic Jews settled with the Dutch and have had a major cultural influence. During the 18th and 19th centuries, the land changed hands several times between the British, French and Dutch. And in 2010 when the Netherland Antilles was dissolved, Curaçao became a country within the Kingdom of the Netherlands. All of this means that the island’s melting pot history has translated in a spot where anyone--of any race, religion, gender, nationality or sexual orientation--is welcome. Period.

Curaçao’s long history with the Netherlands, though, means that they’ve left their stamp all over the island, in touches big and small. Willemstad’s Otrobanda District’s narrow alleys and wide streets are reminiscent of provincial towns in the Netherlands that date back to the seventeenth century. At Karakter, a restaurant and beach owned by Jorrit Heekelaar and Marleen Gerritsen, we noshed on bitterballen, a Dutch deep-fried ball filled with shredded meat, and the flakiest, tastiest Dutch apple pie I’ve ever tasted. And at just every bar and restaurant, you’ll find bottles of lime wedge-garnished Amstel Bright, the Netherlands’ brewery’s answer to Corona.

...and colorful buildings with an opportunistic story behind them.

Willemstad’s vivid architecture--which seamlessly blends Spanish, Caribbean and Dutch influences--put the city on the UNESCO World Heritage List. Our local tour guide clued us in on the history behind the wild tapestry of colors. In the nineteenth century, after governor Albert Kikkert was stationed in Curaçao, he began to get migraines from the island’s stark white buildings. He decreed that buildings be painted by their owners, whatever bright color they fancied. Turns out, Kikkert also happened to own a stake in the island’s only paint factory, and reaped the profits of all those gallon buckets. Many of Curaçao’s buildings are made from coral stone, which eeks out salt over the years, causing the paint to peel and crack. So, painting is pretty much an ongoing project. (Our Tourism Board guide Reggie told us that the colorful paint just makes everyone happy, too.)

The island has a Spanish-like reverence for the Gin and Tonic...

I get giddy when a bar believes that tonic is not an afterthought but an essential ingredient, and when a G&T’s garnish goes beyond a lime wedge and is carefully chosen to bring out the aromas and flavors in a particular gin’s botanicals. So I was totally impressed to find an extensive G&T section of the cocktail menu at many spots on the island, from the beach bar at Avila Resort, to the Caribbean/Asian-inspired Ginger, to Zest Mediterranean. The latter had a staggering 32 combinations, printed on a label on the back of a repurposed Hendrick’s Gin bottle. I opted for Martin Miller’s Gin with Fever Tree Tonic, garnished with black peppercorns and grapefruit peel, but other great options abounded. (Equally enjoyable was the Bombay Sapphire, clove and orange version I sipped on the beach at sunset at Avila.)

...And touring the place where the island’s namesake liqueur is made is a must-do.

Visit the Chobolobo Factory, housed in a nineteenth century mansion, where you can do a self-guided tour to learn about the process of making Curaçao liqueur. It all starts with the laraha, a native orange that while too bitter to be eaten by itself, is delightfully fragrant when the peels are dried and steeped in alcohol. Considered to be a type of triple sec, Curaçao liqueur can be used in Margaritas, tropical sips and anywhere you want to add a shock of that bright blue color. Something you might not know, though? It’s also made in red, green, orange and clear versions, with the same flavor. And the distillery also crafts chocolate, coffee, rum raisin and tamarind liqueur. Try the original in the Blue Daiquiri, with rum and lime juice. Carrying on your luggage? Bottles are also sold post-security at the Curaçao airport’s duty free shop.

From a casual bite enjoyed by the beach to a fancy prix fixe dinner, the island has a flair for the culinary.

Some of my personal highlights: grilled shrimp burrata salad lagoon-side at Baoase Resort; whole roasted snapper at Ginger; tuna tartare with mango and guava salsa by the beach at Karakter, followed by passionfruit cheesecake and Dutch Apple pie; potent Bloody Marys, house made scones with soursop jam at Hofi Cas Cora, an off-the-beaten-path spots the locals frequent for brunch.

You don’t have to break the bank or be a celebrity to have a luxe experience on Curaçao.

Can’t afford to stay at that aforementioned five star resort Baoase, whose three-bedroom villa hails for $1700 per night? Buy a day pass instead. $50 gets you a lounge chair, towel and an amazing beachfront, where you can grab a mesh float and dream the afternoon away, grab snorkeling equipment and head out to the nearby reef, or get out of the sun for a bit in the beckoning blue-tiled pool. Go to Saint Tropez Ocean Club at sunset, when the stark white walls and infinity pool are lit, making the experience feel très exclusive. (Order a French 75, as I taught the bartender how to make one, and it’s a bar that just begs for a flute-in-hand.) Craving more of a daytime scene? Rent a lounge chair for $7 at Papagayo Beach Club, swim in the saltwater pool, watch sand crabs scurrying on the rocks, and sip a Caipirinha or Mai Tai ($10) at the spacious, airy bar. (If you’ll be back in that area another day, order a custom-made pair of sandals at Angiola Riccio (starting at around $80), adorned with your choice of leather straps and decorative accents, then pick them up the next day, for that ultimate Curaçao souvenir.